Week-long ceremonies honoring Senator John McCain will conclude on Sept. 2 in Annapolis, Maryland, where he will be buried at the U.S. Naval Academy. A memorial service will be held the day before in Washington, D.C.

McCain, a navy veteran and former presidential candidate, died on Aug. 25 after a year of on-and-off treatment for a brain tumor. He was 81 years old.

McCain, in a final bid for Republican support from swing state Florida, made a campaign stop at the University of Miami just two days before the election, The Miami Hurricane reported, to give his “Road to Victory” rally speech. 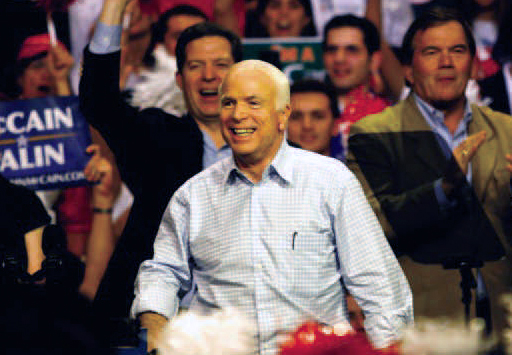 “We have to bring real change to Washington and we have to fight for it,” McCain said to the crowd of UM students and Florida residents. “I’m not afraid of a fight. I’m ready for the fight.”

His time in the Navy, during which the then-lieutenant spent five and a half years as a prisoner of war in Vietnam, was a prominent topic in the 2008 campaign and the years that followed. Barack Obama, who defeated McCain to become the 44th U.S. president, later referred to the veteran as “an American hero.”

John McCain is an American hero & one of the bravest fighters I've ever known. Cancer doesn't know what it's up against. Give it hell, John.

McCain’s achievements continue to be remembered, even by those too young to vote in the 2008 elections. Micaela Stoner, president of the UM College Republicans, said McCain’s presidential campaign was the first she was old enough to follow, and said she rooted for him to win.

“Senator McCain put his life on the line for my freedom and the freedom of the USA,” Stoner said. “Not only did he fight for our rights in the Navy, but also in the Senate as one of the longest-sitting senators.”

McCain had served in the U.S. Senate since 1987. Over his six-term Congressional career, the oft-dubbed “maverick” pushed for bipartisan policy—promoting normalization of relations with Vietnam in the 1990s, spearheading a call for major campaign finance reform in 2002 and arranging a bipartisan compromise on judicial nominations in 2005.

Gregory Koger, a UM professor of political science, said that McCain always provided a sincere voice in the Senate.

“While he had the voting record of a fairly conservative Republican, his public statements and willingness to work with and support Democrats expressed a personal conscience and ‘Country First’ patriotism that transcended party lines,” Koger said. “McCain’s voice will be sorely missed in the debate over the future of the party and the country.”

In recent years and throughout the 2016 presidential elections, McCain did not shy away from publicly countering conservative policy and politicians. He voted against the repeal of the Affordable Care Act in 2017, and released a statement in March criticizing President Donald Trump’s congratulations of Russian President Vladimir Putin.

“[McCain’s] death is the loss of a middleman in the Republican Party who closely represented some GOP members,” said Stoner, a junior majoring in finance and real estate.

Former Florida Senator Connie Mack III, who served with McCain in the House of Representatives in 1983 and later in the Senate, joined 29 other former and sitting senators at a visitation in the Capitol building Thursday.

“Many of us wish we had the courage to have played the role John McCain played,” Mack said.

Both Obama and Bush were asked by McCain earlier this year to speak at his memorial service, to be held Saturday in the Washington National Cathedral, making the senator the first person to be eulogized by two former presidents of opposing parties. Trump will not attend any of the services.

“McCain served as an exemplar of personal honor and public service throughout his life,” Koger said. “As a naval aviator, a prisoner of war, and a member of Congress, he strove to be true to himself and his country.”

Rebecca Goddard contributed to this report.