Like late-night cramming or an all-you-can-eat buffet, the new Hurricanes football ticket policy sounds good in theory—but will it work for students? 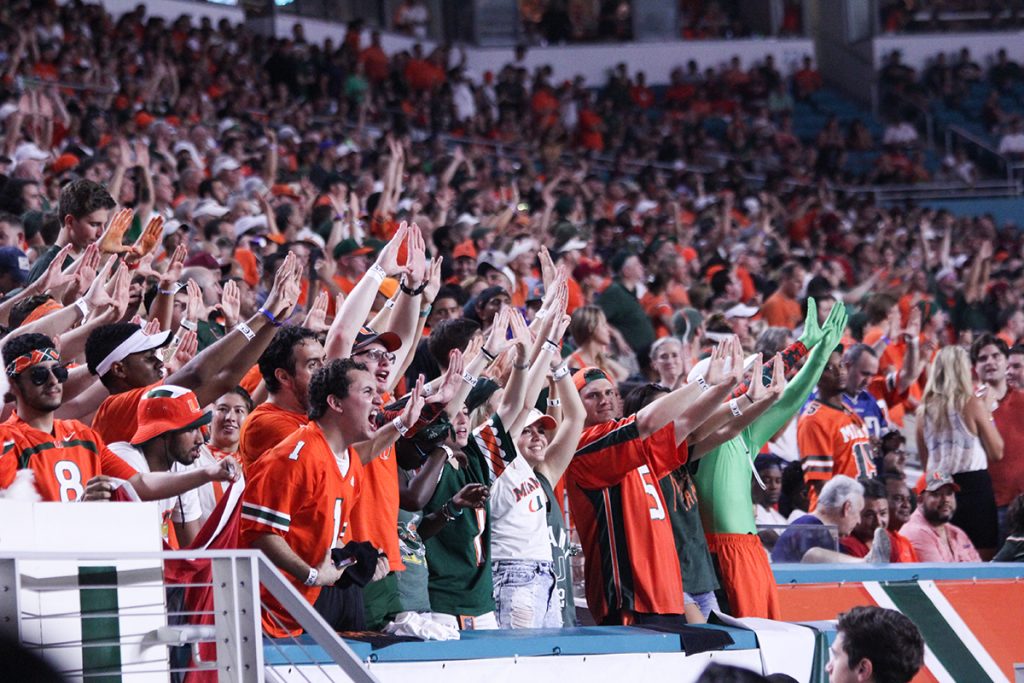 Students in attendance at Hard Rock Stadium during the football game against FSU kept the stadium energized to the very end.

It certainly could. It seems simple enough, after all: just hop online and reserve your ticket, adding just one step to the process. But one can foresee a few potential kinks in the plan’s mechanics.

For example, the new policy might not be impervious to human error—or, rather, our tendency to “look out for number one.” The tickets go live on the Sundays preceding game days, which provides enough time for everyone to pick a ticket and sort out their plans. But with the 8 a.m. Friday deadline looming ahead (and the fact that admission is not guaranteed), many students may naturally feel the need to reserve their ticket and figure out the specifics—like whether or not they actually plan to use that ticket—later.

Who could be blamed for acting quickly, especially when time is a factor? But the reality is that plans change—on a college campus, pretty much by the second. So, the new system may help those early preppers, but it could also lead to no-shows who don’t decide until Saturday morning whether or not they want to attend the game. If they decide against it, that equates to empty seats—the exact problem the new policy ostensibly aims to avoid.

Of course, if this new policy helps improve security—requiring more than a Cane card with a passing resemblance to the holder, for example—then it has value.

And if it helps avoid another attendance issue, like having less seats open than bodies to fill them, it, or something like it, is equally worth considering. And, fortunately, students will be allowed to return their ticket to the system (though up to what point, the athletics FAQ does not explicitly state).

The perfect answer to all of these issues might be something a little more nuanced than the current plan. Perhaps something with more flexibility, to account for real-time changes of plans, would better suffice a student population that already has to travel quite a ways to every home game.

Any critiques of the new system are, of course, conjecture. Until the first tickets become available, no one will know how the new policy really plays out. When those tickets are made available, though, the onus is on students to use them or, well, lose them. Don’t let an extra step spoil your game day spirit, but also be sure to make room for other students, too, by returning your ticket should you finalize other plans. Everyone who’s paid the athletic fee deserves the choice, at least, to see their team in action.