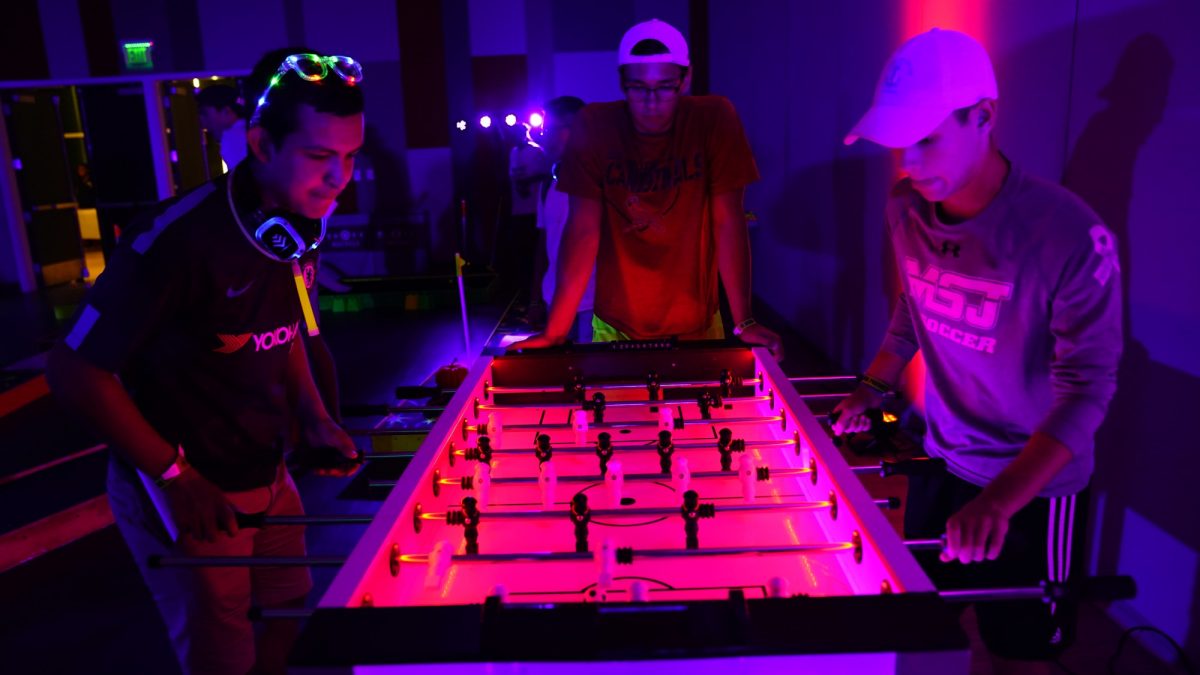 Last Friday, on Aug. 24, Canes Night Live lit up Shalala Student Center with the second Canes After Dark (CAD) event of this semester — “Glow What U Know.”

Canes Night Live (CNL) is one of seven Hurricane Productions committees responsible for planning events for the student body.

“Hurricane Productions is responsible for a lot of the entertainment on campus,” said Daniela Bermudez, the chair of CNL. “Canes Night Live, specifically, plans late night programs for the entire student body called ‘Canes After Dark.'”

At this month’s glow-in-the-dark-themed event, students could enjoy four hours of glow-in-the-dark cotton candy, airbrush tattoos, arcade games and t-shirts. They could also create wax hands and dance along with a silent disco.

For Leeanne Fang, a freshman nursing major, “Glow What U Know” was the first on-campus event she had attended since orientation.

“This is a really cool event, I love the lights and stuff,” she said. “There are bright colors everywhere, and it looks like people are socializing, I like that.”

“Additions to the event series such as the wireless headphones have helped to make it more distinct and popular,” Furst said.

Giveaways also attract many students to CAD events. Free beanies, socks and waterproof speakers have been a big hit in the past, said Bermudez, a senior biology major.

According to Furst, a junior marketing major, there are many factors that go into promotion of CAD events, mainly because they are different in size, location and content.

“Once we’ve decided on a theme, we begin contacting vendors to get quotes and make bookings,” Bermudez said. “It’s a very detailed process that takes some time, but we work hard together to bring forth the best events for our students.”

Bermudez believes that CNL committee is reaching a large part of the student population on campus, but she said she is always looking forward to getting more students to attend future events.

Freshman chemistry major Stephanie Hoang said she’d like to be more aware of on-campus activities, as she came across “Glow What U Know” only by chance.

“If we’re more informed about events like this, I’d totally attend them,” she said.

To stay updated on upcoming CAD events, follow CNL on Facebook at facebook.com/CanesNightLive. The next Canes After Dark event, “90’s Skate Night,” will take place on Sept. 21. All CAD events are free to students with a Cane card. 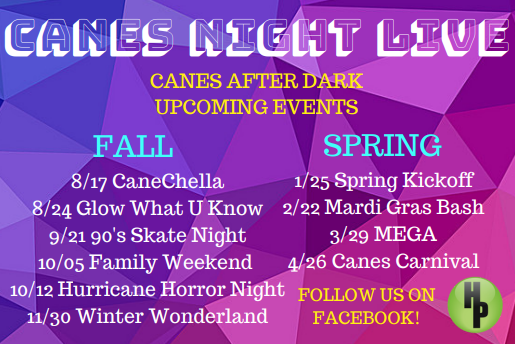