Home » Hurricanes to kick off season against Tigers

Hurricanes to kick off season against Tigers

The Miami Hurricanes knew what they were getting into when they agreed to play the Louisiana State Tigers in college football’s opening weekend of the 2018 season. 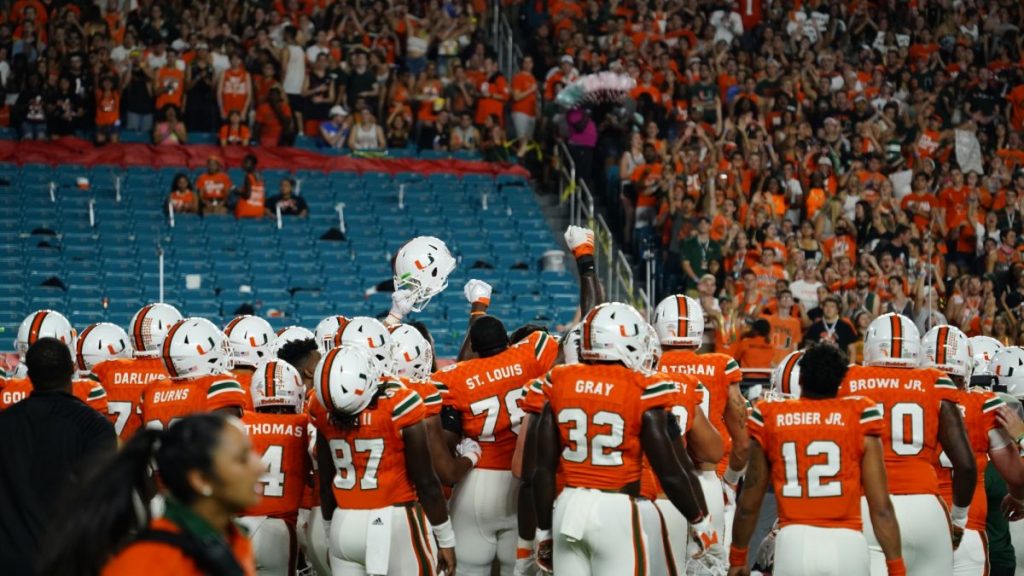 The Hurricanes celebrate in front of fans at Hard Rock Stadium following a 41-8 victory over No. 3 Notre Dame Nov. 11, 2017. Photo credit: Hunter Crenian

“There are no warm up games here,” head coach Mark Richt said. “We will be physically and mentally tested. It will be a gut check, at the very least.”

With a nationally televised, 7:30 p.m. Sunday kickoff set in one of the country’s biggest stadiums, all eyes will be on the Canes in what is undoubtedly a high risk, high reward scenario.

Win, and you have the momentum of beating one of the nation’s most successful programs to start the season, which should translate nicely with a favorable schedule in sight.

Lose, and not only will the doubters of UM’s resurgence reemerge, but the chance to play in the College Football Playoff – and to stay amongst the top teams in the AP rankings – will take a major hit.

But Richt and his staff have that much confidence that this team will pull out the victory, and evidently, the world does too.

The Hurricanes, ranked No. 8 in the AP Top 25 poll to start the season, are 3.5-point favorites against the underdog, No. 25-ranked Tigers. And with Miami bringing back a top-ranked defense that returns the majority of its players that terrorized schools last season, along with plenty of explosive weapons on offense, it’s easy to understand why.

“We’ve got a senior-led group,” senior safety Sheldrick Redwine said. “We’ve got linebackers that have been here for three years and have a lot of game experience.”

But LSU has stars on its defense as well, and if UM isn’t careful, it could receive a punch to the mouth early and struggle to recover.

The Canes had their fair share of slow starts coupled with come-from-behind victories last season and had to rely on late rallies to win games. With last year’s starting quarterback Malik Rosier taking the lead once again behind a shifted offensive line, it’s only normal to wonder if Miami will once again wait until the second half of each game to flip the switch this season.

Well, they can’t afford to because it simply won’t work against a Tigers team that has a major chip on its shoulder and a head coach-quarterback combo of Ed Orgeron and Joe Burrow with a lot to prove.

Coaches say Rosier’s accuracy has improved over the offseason, but he will have to show that under the game lights before defenses adjust. He had issues with his passing efficiency late last year, specifically on third down.

LSU is one of the country’s best defenses on third down, and it will smell blood if Miami let it get to that point early and often.

“I’m starting to see the bigger picture now,” Rosier said. “Sometimes [last year] I would kind of get funneled into seeing just one side of the field, and now I’m seeing the whole field. And I told the guys, ‘I’m going to protect you, you just got to catch the ball.’”

Bottom line: this matchup will likely come down to the defenses in a low-scoring contest, but Miami can’t play the game of “catch-up” in this one, or it will bite them.

“When you play LSU game one in this type of setting that we’re going to be in, you can’t help but think, ‘We better get ready,’” Richt said.

The Miami Hurricanes will take on the LSU Tigers 7:30 p.m. Sept. 2 at AT&T Stadium in Arlington, Texas. The game will be nationally televised on ABC.