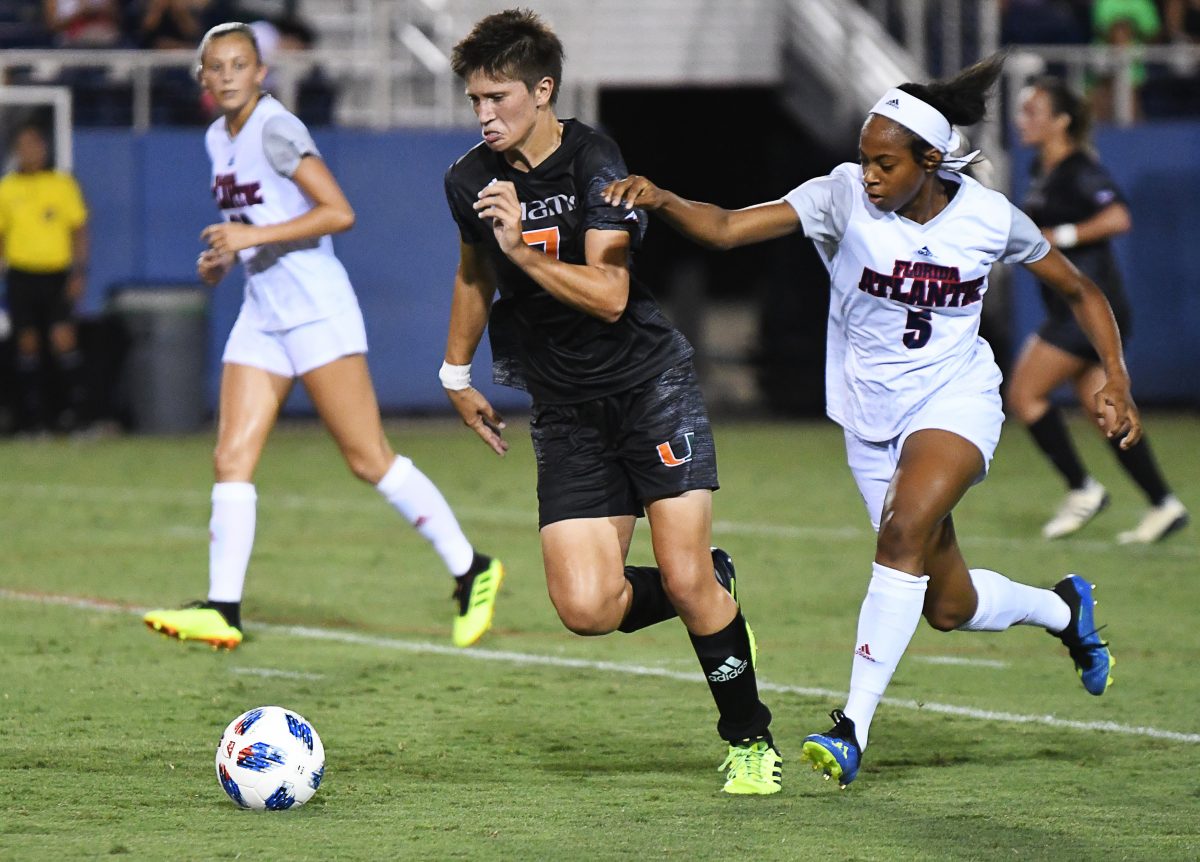 It wasn’t easy, but the Hurricanes came out on top.

In Sarah Barnes’ debut as the University of Miami women’s soccer head coach, the Canes found themselves trailing early in their season opener on Friday evening.

Florida Atlantic scored just 94-seconds into the match, but Miami responded with three goals of its own to pick up a 3-2 victory at FAU Stadium.

“I thought we were a little shaky, but I am really impressed with our resiliency. Giving up a goal in the first 90 seconds is not the way you want to start your season and I think that is a very good FAU team,” Barnes said. “I think there are a lot of pieces that we are excited about and we have to keep tackling one thing at a time.”

Owls midfielder Mary O’Hara opened the scoring in the second minute, finishing on a breakaway opportunity to put FAU up 1-0.

But the Hurricanes answered back.

In the 13th minute, freshman forward Gudrun Haralz charged into the box to finish a loose ball after a corner kick, scoring her first career tally to level the match at 1-1.

“I was a little nervous. Everything is new for me,” Haralz said. “I think the nerves went away after the goal. Once I scored and tied the game, I thought we could win it.”

With the match knotted up, forward Michelle Giamportone came off the bench and provided the Hurricanes with a spark.

Giamportone gave the Canes their first lead of 2018 in the 32nd minute when Haralz linked up with the sophomore. Giamportone fired from 25-yards out and found the upper left corner of the net.

“I wanted to give the team more energy and fire to fuel us,” Giamportone said. “I took the opportunity to shoot just beyond the 18-yard line and the rest is history.”

Miami (1-0-0) held FAU to only one shot in the first half and took a 2-1 advantage on the scoreboard into the intermission.

Coming out of the locker room, the dynamic duo once again made their impact felt.

In the 60th minute, Giamportone and Haralz played a give-and-go setting up the sophomore for another goal striking opportunity at the top of the box. Giamportone rocketed a shot off of the left post that bounced across the goal line.

“Gudrun played a perfect ball over. I didn’t think it was going in, but I heard it hit the net,” Giamportone said. “I don’t think I’ve scored a goal that pretty in my life.”

It was the first multi-goal performance for Giamportone, who only registered one tally in her freshman campaign a season ago.

“Michelle has an unbelievable strike from distance and came into this season playing really well,” Barnes said. “Her intensity was awesome, her confidence was great and her decision making was very good. I thought in comparison to preseason striking opportunities, tonight’s decisions were significantly better. It is awesome to a see a kid grow over just two weeks.”

O’Hara played a ball over the top to junior forward Tiril Haga, who ran past a defender and knocked it off the post and in.

The Hurricanes closed out the match controlling possession and keeping the Owls’ chances limited. UM held a 5-2 advantage in shots on goal.

With the victory, Miami moved to 9-6 all-time against FAU.

The Canes will look to keep their momentum going when they host crosstown foe Florida International at 6:30 p.m. Aug 19 at Cobb Stadium.