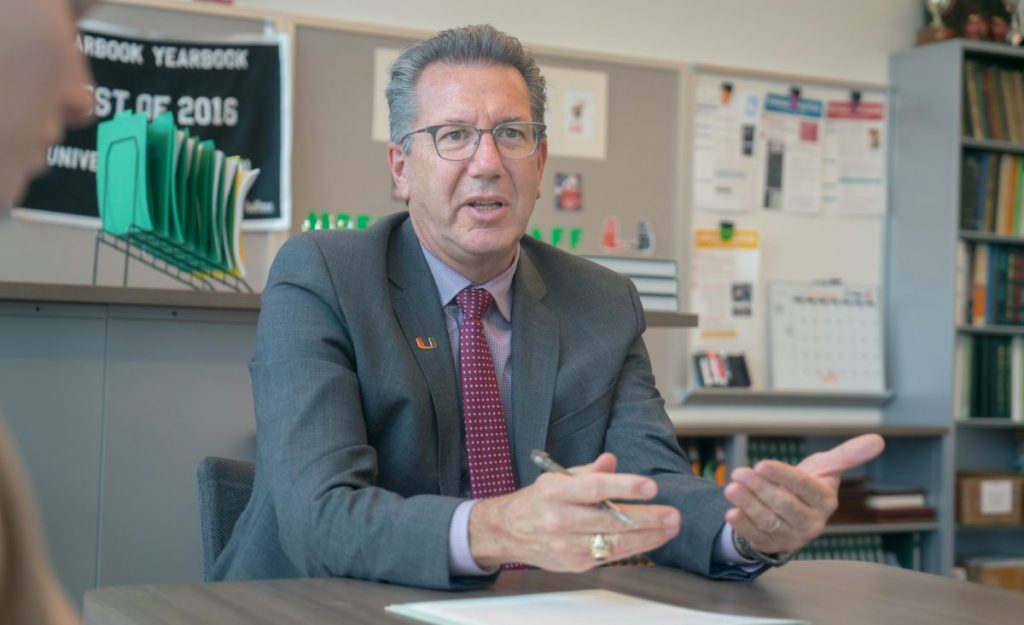 When Jeffrey Duerk, a rooted midwesterner, came to the University of Miami a little more than nine months ago, he didn’t know he would have to lead an academic institution through a hurricane. Though he’s spent less than a year at the university, Duerk has had to balance more than a few things on his plate. Still, he said the university’s students continue to impress him every day.

“I feel great; I feel energized,” Duerk said. “I would say inspired is another word I would use. It’s just been an amazing year getting to know the students, the faculty, the leadership, at the dean level. The team I work with really has been remarkable and far more than I expected.”

In the short time Duerk has been in the position, he’s had to face making a decision on one of the biggest storms recorded in history to hit South Florida. Even months after Hurricane Irma hit South Florida and closed UM’s Coral Gables campus for weeks, Duerk still said it was one of the toughest parts of the job.

“Understanding the size of a hurricane, coming from the Midwest, where we see things like blizzards that happen over the winter time and having seen hurricanes on the news, it doesn’t give you any type of perspective on what a real one was like,” he said.

However, Duerk said from the experience he learned both lessons and areas of improvement. He said the UM leadership team, which he is a part of, made the right decision to close down campus when assessing the magnitude and impact of the storm. He said making decisions early, such as canceling classes, evacuating campus and getting students home safely in a timely manner, was among the biggest things he learned.

If there was anything to improve upon throughout the whole experience, Duerk said it was to be clearer with the UM community on when the university plans to reopen and return to campus and on the “different modes” in which the university will operate when a storm comes. He said he’d like to see different phases, such as “preparing, enduring and recovering,” activated in the future.

Duerk said he doesn’t think provosts, in their first year, can really accomplish a lot because they’re still learning about the university. However, he said one of his proudest moments was facilitating in recruiting top talent to the university. During the 2017-2018 academic year, Cindy Munro was appointed as UM’s new dean of School of Nursing and Health Studies and Henri Ford as the dean of the Miller School of Medicine. Recruitment for the new dean of the School of Education and Human Development will wrap up in the next couple of weeks, too, he said.

“Those are big things because that is essentially the leadership team of the university,” Duerk said.

In the future, Duerk said he hopes to help the university become “AAU competitive.” The Association of American Universities, comprised of “62 distinguished institutions,” earns the majority of competitively awarded federal funding for academic research and helps shape policy for higher education. Duerk’s former university, Case Western Reserve University, is one of the 62.

The AAU selects universities to be members.

Duerk said he plans on becoming AAU competitive by “increasing research funding and being more sophisticated” in how research is approached as well as being more “interdisciplinary.”

Duerk said if there was one thing he could reiterate over and over it would be that the UM student body is so impressive.

“Probably 70 percent of the students would have been in engineering and science,” Duerk said. “Here, what’s really interesting is the mix of students. It’s a different kind of student, and they’re really good. The students are remarkable in so many ways. It’s really been an inspiring nine months.”

Featured photo is a file photo of The Miami Hurricane.