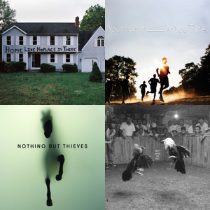 For my last hurrah as Edge Editor, I’m going to be a little selfish. Instead of giving you a genre-spanning list of this week’s releases, I want to share the songs that have defined my last four years in college.

The Hotelier – An Introduction to the Album

I’m giving you “An Introduction to the Album,” but I implore you to listen to the rest. “Home, Like Noplace is There,” is the perfect storm of catharsis, regret and uncertainty. I’ve been a longtime consumer of emotive hardcore, but The Hotelier’s second LP is a standout for me in its poeticism, dynamics and arrangement. It’s rough, it’s evocative and it’s one of the only albums that is capable of making me cry.

Sorority Noise – A Portrait Of

There’s something bittersweet in how triumphant “A Portrait Of” is – the lyrics about self doubt and suffering are ironically juxtaposed with group vocals and soaring guitar lines, cynical quips at God and the typical pop-punk chugging strum. These choices make a compelling statement about the universality of personal struggle, and, as the repeated line claims, “I’m not trying to say it’s easy, I’m trying to say that it’s fine.”

Nothing but Thieves – Drawing Pins

Whether or not you’ve fallen victim to unrequited love, “Drawing Pins” will make your skin crawl with its portrayal of desperation. Conor Mason’s vocal range matches the dynamics of the music, climbing from the low, whispering verse over a sparse bass line to the screamed chorus over a full rush of guitars.

Both times I’ve seen Black Pistol Fire live, Kevin McKeown smashed a guitar and dove into the crowd – once, I caught his left ankle. Kevin McKeown’s gruff vocals and dirty-South guitar lines and Eric Owen’s smashing guitar hits are all it takes for this two-piece to light a fire. BPF remains my favorite band to stream over an angry weightlifting session.

Royal Blood – I Only Lie When I Love You

Did I say angry? Royal Blood, another bluesy two-piece, might beat out Black Pistol Fire in that category. “How Did We Get So Dark?” is a seething reel of breakup songs that has fueled my deadlifts since April 2017. I think I hate Mike Kerr’s ex almost as much as he does.

PUP – If This Tour Doesn’t Kill You, I Will

Clearly, the members of PUP harbored a lot of animosity toward each other back in 2014 when they performed more than 250 consecutive gigs. With the caffeinated energy of a modern pop-punk song, “If This Tour Doesn’t Kill You, I Will” calls back to the genre’s roots, when songs were lighthearted, comedic and a little offensive.

I’ve coined a term for bands like Broadside, State Champs, Issues and Neck Deep: Pop-Pop-Punk. Unlike gruffer PUP and its lovably sloppy predecessors, bands like Broadside boast squeaky-clean production, refined vocals and traditional pop song structures. Call it inauthentic, but I think the precision of its sound makes Pop-Pop-Punk particularly evocative. There’s a knot in my chest every time I hear the chorus of “Storyteller” – “I’m not a li-ar, may-be a sto-ry-tel-ler!”

Before you listen to “Whimper,” listen to all of Microwave’s “Much Love.” Actually, listen to the full album for each of these tracks – I firmly believe that is the best way to consume music. Like so many of the picks on the list, “Whimper” is a vignette of a much longer and more complex narrative played out over the 10 tracks on “Much Love.” I am endlessly impressed by Microwave’s wit, literary lyrics and ability to cohesively blend hardcore and softer emo styles.

That’s not a man singing – that’s Leah Wellbaum. One of the most sultry, seething lyricists and ripping guitarists in the contemporary rock scene, Leah fronts Slothrust like she doesn’t need the band. As a poet, I laud Leah for her imagery and ability to inject poeticism into her songs without it feeling forced.

For me and many other musicians, writers and music consumers, 2017 was the year of Phoebe. In her debut album, “Stranger in the Alps,” the Los Angeles-based singer-songwriter carries you through a narrative of her personal life, recounting twisted relationships, depression and thoughts of suicide, over a background of subtle strings and electric guitar. She’s contemplative, she’s witty, she’s grateful – everything one would hope to be at 23 – but she’s also struggling and doesn’t romanticize a thing about it. The lyrical content of “Stranger in the Alps” is as sickening as it is comforting and, coupled with its sparse arrangement, has earned its place among the most powerful works I’ve encountered in college.