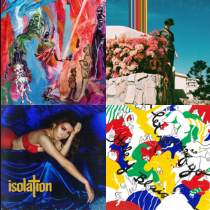 On the same day this UK four-piece signed a deal with Rough Trade, Britain infamously left the EU. In its debut LP, these Gen Z women play with a mixture of malaise and anger, fitting for a post-Brexit era that threatens to diminish DIY culture.

Ritt Momney – Something, in General

Hopping on the bandwagon of ironic monikers, Salt Lake City project Ritt Momney released this dreamy, synth-laden single last week. With fewer than 1,000 listens on Spotify, it’s certainly a lesser-known find. The band’s name might be excessive, but the sound is undeniably smooth.

Kali Uchis – Your Teeth In My Neck

London singer-songwriter, producer and DJ Tom Misch’s first LP, “Geography,” combines sounds from jazz, disco, hip-hop and funk. The 21-year-old began as a SoundCloud beat maker at the age of 16, when he was uploading roughly three tracks a week. Five years later, Misch has released a thoughtful 13-track record that boasts influence from both his beat-making past and degree in jazz guitar.

Bristol’s Fenne Lily began touring at the age of 17, when she left her home in Dorset to support acts including Marika Hackman, KT Tunstall, C Duncan, Palace and Marlon Williams. A song she wrote at 15, “Top To Toe,” skyrocketed her to streaming-service fame with its heartbreaking lyrics and stripped-down instrumentation.

Unknown Mortal Orchestra – How Many Zeros

Chicago’s Tahj Malik Chandler, known as Saba, is a bit of a genius – after skipping a few grades, he excelled in high school from the ages of 12 to 16, all the while passing out mixtapes to his peers. Saba cites his father, Chicago R&B and jazz artist Chandlar, for his exposure to music. His tracks, featuring witty lyricism and complex jazz instrumentation, pay homage to his background.

South LA’s teenage heartthrob Omar Banos got his start writing SoundCloud ballads under the pseudonym Cuco. The 18-year-old doesn’t take himself too seriously – from his satirical rap about his Honda CR-V, which claims, “I look like a mom / in my CR-V,” to his twitter handle, @Icryduringsex, Cuco’s image is quirky and fun. Still, as his sold-out shows suggest, it doesn’t distract from his talent.

Chromeo, an Electro-funk duo from Montreal formed in 2002, teamed up with American rapper DRAM for this caffeinated R&B single. With a syncopated guitar line, driving slap bass and swirling synths, “Must’ve Been” shows promise of becoming a dance-floor anthem.