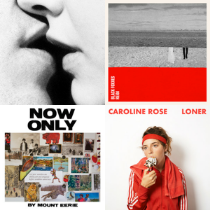 To hear this week’s round of tracks, check out the Spotify playlist.

United Kingdom trio Black Foxxes has returned with a thoughtful sophomore album after the success of “I’m Not Well” in 2016. This time, the band sloughed off its American-Southern edge in favor of the contemplative, tortured rock at its core – the album’s name, “Reiði,” is taken from the Norse word for rage. With haunting images of the Icelandic wild, everything about this album from cover to lyrical content is bone-chillingly cold.

Songwriter and producer Phil Elverum is the man behind Mount Eerie. Though the project has been around since the early aughts, Mount Eerie caught critical attention with its 2017 album, “A Crow Looked at Me.” In a series of mournful, poetic songs, Elverum tells the story of losing his wife to cancer and being left to care for their newborn daughter. “Now Only,” his 2018 release, approaches the loss from a new light and experiments with different song forms while maintaining his broken tone.

NYC-based bad bitch Caroline Rose just released her first LP, “LONER.” Her pop-rock sound incorporates punk elements, witty lyrics and infectious synth riffs. “Soul No. 5” is a catchy commentary on catcalling with everything from shouted choruses and screaming guitars to an organ.

Years & Years, an electro-pop group from the United Kingdom, released its internationally chart-topping single, “King,” in 2015. Now, the group is back with “Sanctify,” a triumphant track that blends house beats and harmonies inspired by boybands of the ’90s.

Chicago-based DJ Ethan Snoreck is only 18 years old, but he’s already worked with pop phenoms Charli XCX, Elohim and Dua Lipa. “Be Like You,” his latest collaboration with dance-pop duo Broods, is yet another example of the teen’s electro-pop breaking production genius.

The Norwegian duo Smerz is composed of 25-year-olds Catharina Stoltenberg and Henriette Motzfeldt – beat makers, vocalists and multi-instrumentalists. The sound is a mix of dark, distorted R&B electronica and soft and sensual singing. As much as the duo’s songs make you want to dance, they are strangely unsettling.

This indie-pop band from Brooklyn has a smooth sound that echoes both HAIM and early 2000s R&B. Its newest single, “There’s a Reason,” is a declaration of love for the one who can’t seem to get away.

George Lewis Jr., the Dominican American singer, songwriter, producer and actor best known as Twin Shadow, has mastered an ’80s sound that pulls at your heartstrings – and when it comes to fashion, he gives Kanye a run for his money. On his new summer-beckoning single, “Saturdays,” he teams with three-sister indie band HAIM and creates a track brimming with nostalgia.