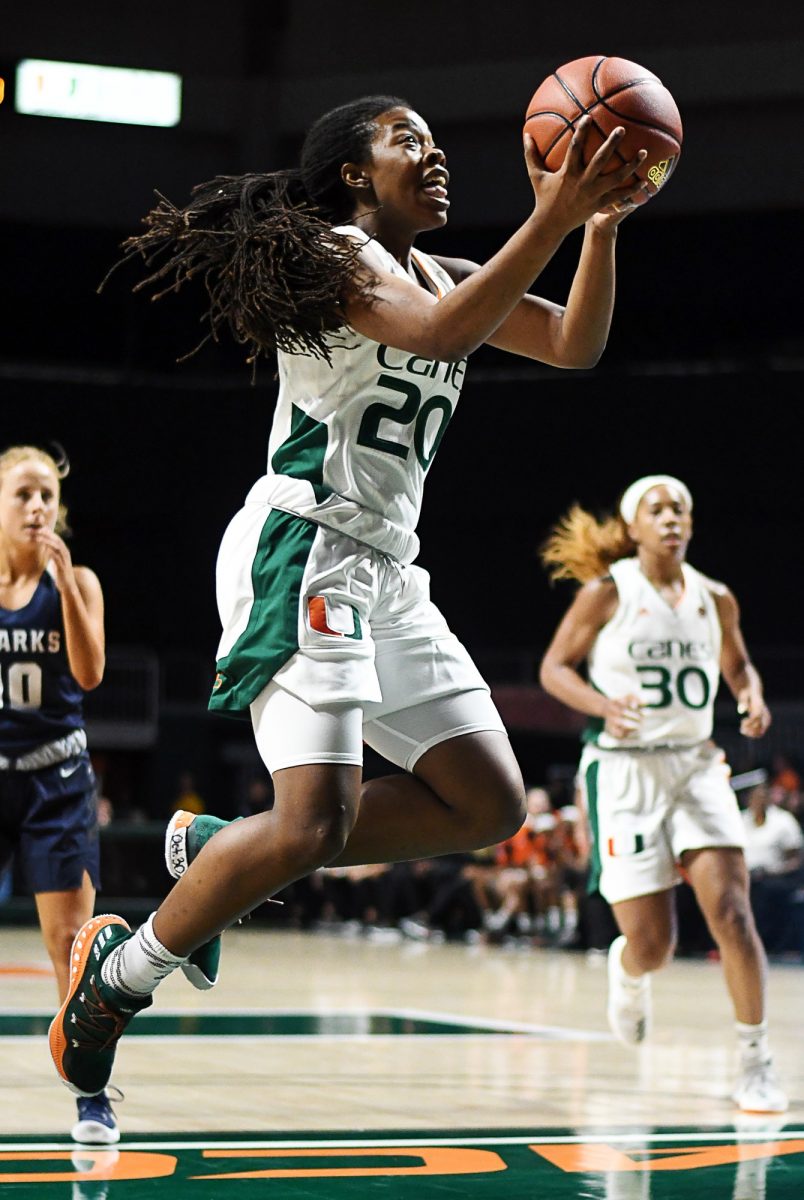 As a standout high school basketball player, she helped lead Miami Country Day School to two national championships, four state titles and a No. 1 national ranking during the 2016-2017 season.

But on Nov. 10, when it was time for her first official game at the University of Miami, the freshman guard was absent, and it wasn’t because she was nervous.

Her grandmother’s funeral was that day.

For the Davie, Florida, native, family has always been the top priority. Her parents and two brothers attend nearly every home game to cheer for her.

“I love it because I may not know the other people in the stands, but I know that I have four people who will always be there for me whenever I need them,” Marshall said. “And it’s really nice to have them sitting outside waiting for me and, after every game, going out to eat as a family.”

UM’s location played a crucial part in Marshall’s decision to become a Hurricane.

“When you graduate high school, you are kind of on your own, but her parents still had that motherly and fatherly influence like, ‘This is still our baby,’” UM senior captain Erykah Davenport said. “She’s still really attached to her mom and dad. And since they’re so close, she’s available to go home often.”

But the family got some devastating news on Oct. 30, just a day before Miami’s first exhibition game.

Marshall was looking through Snapchat when she saw that her cousin had posted the news of her grandmother’s death. She then called her mom, who was crying on the phone. At that moment, she knew.

“A lot of things went through my head at that time,” Marshall said. “I was thinking back to all the little things I could have done for her and a lot more love I could have showed that I had for her. I had a lot of memories of when she was happy and smiling and laughing.”

Her grandmother, Lunie Joseph, had been suffering from Alzheimer’s disease since before Marshall was born. But she also suffered from an undetected kidney failure, from which she died.

Just a few days prior to her death, Joseph was at home doing “perfectly fine,” being herself and speaking in her native Creole. But a few days later, when Marshall’s mother, Myrline, tried to feed her, she began to vomit, and blood gushed from her nose.

After the incident, Marshall spent the last four days Joseph was alive with her in the hospital. She missed basketball practice to be there with her grandma until the day she died.

“The days leading up to the passing of her grandma were just as hard as the actual day,” Miami head coach Katie Meier said. “Kelsey would see people that she really cared about and someone she really loved just hurting.”

But Marshall played in the Hurricanes’ exhibition game the very next day. She went through her typical routine and she was the first one on the court to warm up – an hour and 45 minutes before tip-off.

“She came and she gave to Miami when she didn’t have to,” Davenport said. “She could have really used that as a crutch by saying, ‘I’m not feeling my best so I don’t have to give Miami my best.’ She still wanted to give to Miami regardless of how she was feeling in her personal life, so I really respect that.”

Carlyle “Slim” Lewis, one of Marshall’s high school coaches, was right by her side during the difficult process. Unlike many coach-player relationships that fade after high school, Lewis is still one of Marshall’s basketball trainers. He pushes her to be better, and he regularly offers her advice.

“I told her, ‘Use that time on the court to dedicate your games to her,’” Lewis said. “’That’s the most you can do. Don’t sit there and find yourself stressing about something you can’t control.’”

Marshall, who is averaging 7.5 points and two rebounds per game in her first year at Miami, has done just that.

“I always try to be the best person I can be because there is always someone close to me who is doing their best, so I try not to limit myself,” she said.

And for Marshall, the memory that will always stick out in her mind will be Joseph’s moments of pure joy.

“She didn’t really speak English, so the one thing I can always remember is when somebody else was laughing, even though she didn’t understand what you just said, she was going to laugh with you, just to laugh,” Marshall said. “That’s what I remember the most about her.”