In his first career start as a Miami Hurricane Nov. 10, sharpshooter DJ Vasiljevic struggled mightily, shooting just 2-12 from the field while only registering seven points.

Less than 30 minutes after the game, Vasiljevic was putting up shots in front of empty seats at the Watsco Center.

That extra work paid dividends for Vasiljevic just two days later, when he responded with a team-high 16 points to help No. 13 Miami sink Navy 89-55 on Sunday, Nov. 12.

“I didn’t do it many times last year, but I feel like the shots I should have made I stayed back on to work on them – the catch-and-shoot type shots,” Vasiljevic said. “I didn’t feel right after the game.”

The sophomore guard knocked down five of his 10 shots from the floor, including four of his eight from three-point range.

Sophomore forward Dewan Huell had a breakout game, notching his first career double-double. He finished with 14 points and matched a career-high 10 rebounds.

“For us to have five guys in double figures and Bruce [Brown] not be one of them, it says we’ve got good balance,” coach Jim Larrañaga said.

“He missed some shots, but he’s such a good player,” Larrañaga said. “For him to go 1-10, 0-3 on three-pointers is so uncharacteristic. We posted him up, and he missed it right at the rim. Some nights you miss.”

Despite the lackluster performance from Brown, the Hurricanes (2-0) never trailed and opened the contest with a 9-0 run in the first four-plus minutes.

Miami (2-0) shot 55 percent from the floor and led by as many as 35 points in the closing minutes.

“I was proud of how hard we played all 40 minutes,” Larrañaga said. “Our defense was very good, but our effort was outstanding.”

“They have really good speed,” Navy coach Ed DeChellis said. “They really get down the floor. It takes them three steps. It takes us five or six steps to get to the same spot.”

Miami suffered a scare late in the second half when Brown went down with a left ankle injury. He gingerly walked off under his own power and went into the locker room. The injury did not appear to be serious.

Miami will conclude its season opening three-game homestand when it plays Florida A&M at 7 p.m. Thursday, Nov. 16, at the Watsco Center. 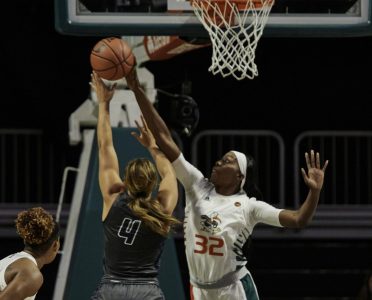