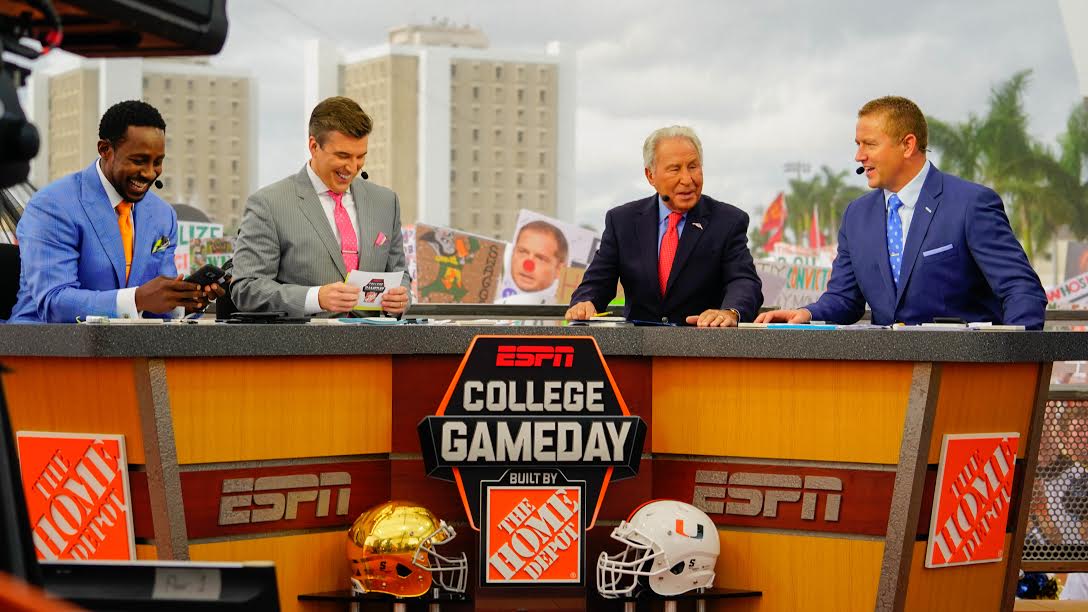 This is a live blog covering the broadcast of ESPN’s College GameDay from the Coral Gables campus of University of Miami. The Miami Hurricane will be adding information as College GameDay continues and updates become available.

2 out of 3 @CollegeGameDay analysts picked @CanesFootball to win tonight against Notre Dame. Was Lee Corso one of them? FIND OUT here on our live blog: https://t.co/rX50H7Cu5z pic.twitter.com/w03ogWYhwa

Desmond Howard and guest celebrity picker Alex Rodriguez both picked the Hurricanes, and Lee Corso – after talking for nearly a minute about how much he loves Miami – went with the Fighting Irish.

The @CollegeGameDay analysts made their predictions. Did they pick @CanesFootball or Notre Dame? FIND OUT https://t.co/vBNWoF5mqu pic.twitter.com/3htMVHaEwg

And it all came down to this … The College GameDay analysts made their predictions for Saturday’s games, including Miami-Notre Dame.

After an hour into the broadcast, campus is only getting more packed and lively for College GameDay.

"This is my way, basically, of honoring him," Hurricanes fan Shelton Douthett (@Da12thMan) talks to @isaiah_km about how he celebrates his brother by dressing up in gear at games, see more on our Live Blog, https://t.co/iu3l3adcHu: pic.twitter.com/oJCUzelaDK

While many people on campus are just here to support their alma mater, the Canes hold special significance as more than just a football team for some in attendance. Shelton Douthett puts a lot of effort into showing up for the Canes in order to honor his brother who was a season ticket holder and passed away years ago.

One of the most used themes for GameDay signs is the beloved turnover chain, introduced this season. The phenomenon has inspired clothing, homemade replica chains and lots of word-play for the signs. One read “You can’t spell national CHAmpIoNs without the CHAIN,” another “The turnover chain was made of leprechaun gold.” Fans in the film above are performing a song they made in honor of this new Hurricanes icon.

Among the crowd at GameDay are some of the most recognizable fans that frequently appear on the screens of Hardrock Stadium. The super fan in the film above has traveled to all but two of the Hurricanes football away games for the past three years.

Other viewers who didn’t fit into the pit or came later found places to watch, on the steps along the lake or on the Fate Bridge to still be a part of the action. Admittance to the pit came with the stipulation that no food or drink was allowed, a difficult proposition for some who had been waiting in line since 3 or 4 a.m.

Not all students had to crowd into lines early in the morning to get a close view of the GameDay action. Select students were invited to a “Student Leader Lounge” on the UC Pool Deck. No signs were allowed, but these students were featured in several shots, and a free breakfast reception was provided.

The crowd got a little hostile with yells of “boo” heard around campus when host Kirk Herbstreit predicted that Notre Dame would win the game tonight, but rebounded with even louder cheers when Desmond Howard countered that prediction, asserting that the U is back and ready to win this game.

The broadcast kicked off at 9:00 a.m. with shots of the campus putting its most beautiful scenery forward – divers jumped in sink into the UC Pool, sailboats cruised around Lake Osceola and mobs of fans threw up the U.

Ryan Moon, a junior majoring in microbiology, lined up on campus at 4:30 a.m. but had had enough and decided to go home just after 7:00 a.m. “I’m really sick,” Moon said, through sniffles. “I was going to suck it up, but I can’t suck it up anymore.”

College GameDay is known for the outrageous signs that fans bring along to support their team and to get on-camera attention. There’s a bit of one-upmanship for who can make the funniest, most shocking or smartest signs and some students have been discussing their sign plans all week. It led to entertainment value in the long line.

Student and fans @univmiami finally starting to make their way through the gate for @CollegeGameDay. Still a huge line though. @CanesFootball pic.twitter.com/HOMBLCUhim

Fans started to be able to enter the pit at 6:40 a.m. The line began to move as people filled into the patio, but it still wraps all the way around the SSC.

@univmiami students and fans are starting to be let in to @CollegeGameDay after hours of waiting in line. @CanesFootball pic.twitter.com/lZgDIfpgd5

The line began at the Lakeside Patio, stretched back to the Rathskeller, wrapped around the back of the Donna E. Shalala Student Center and extended all the way back to the Foote Green.

ESPN’s College GameDay has been taking over campus the Lakeside Patio since they began setting up on Nov. 8. Today, when the nationally broadcast pre-game show films live, it has taken over the entire campus. Fans started lining up as early as 3 a.m. to ensure entrance to “the pit,” the area that will be broadcast as the backdrop behind the hosts of the show.