On Nov. 4, it was announced that ESPN’s College GameDay would be making its way to Miami Nov. 11 to preview the primetime matchup between No. 3 Notre Dame and No. 7 Miami, among other games.

Now, the location is set.

The school announced Nov. 8 that the show will broadcast from 9 a.m. to noon that Saturday on the campus’ Lakeside Patio.

The main stage will be set up on the north end of the patio, between the Donna E. Shalala Student Center and the Norman A. Whitten University Center Pool.

More of the same pic.twitter.com/4IP7zpkB46

The event is free and open to the public. Fans may begin arriving to the “Pit” area in front of the stage on a first come, first serve basis at 5 a.m. The Pit opens at 6:30 a.m.

ESPN’s College GameDay, a pre-game show broadcast to preview the day’s upcoming games, will broadcast from Coral Gables for the first time since 2001. The program airs from the location of one of the weekend’s featured games between two highly ranked teams.

“When GameDay comes, that means something good is happening at your school,” UM head coach Mark Richt said. “I hope they enjoy it. I hope we live up to the expectation of that type of a game. We need a packed house. I believe we’ll get it.”

A year later, what students on both sides of the aisle think of a Trump presidency
Disability studies minor would bring UM closer to its goal of inclusivity 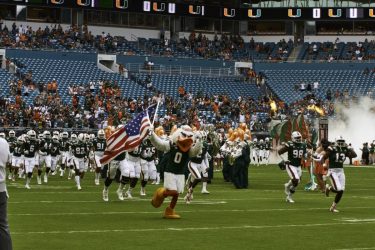