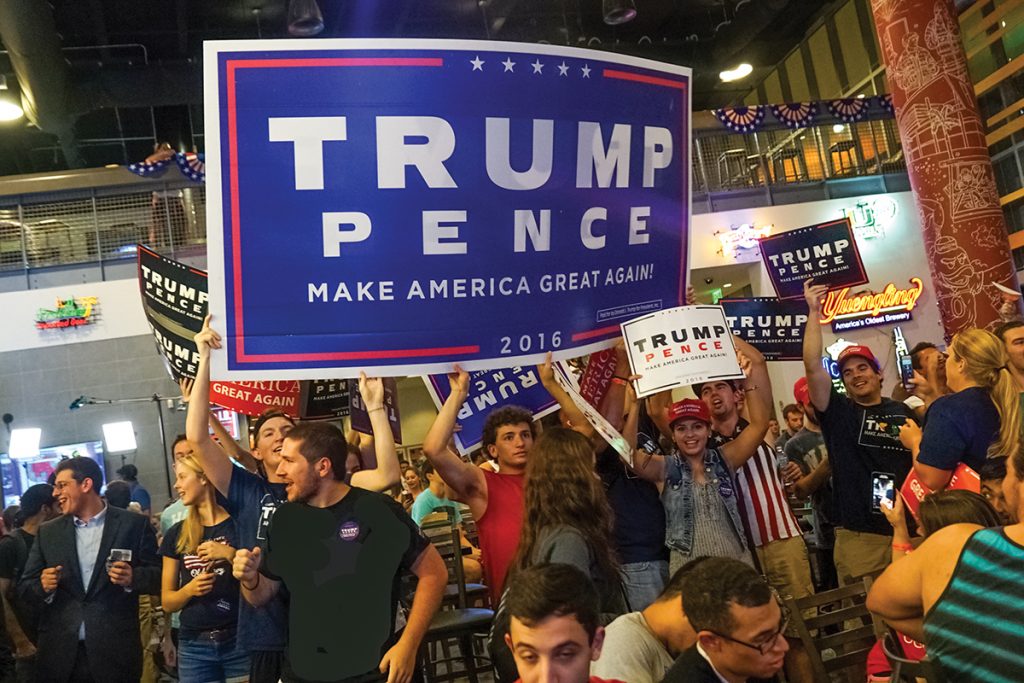 Angelica Duque remembers Nov. 8, 2016 as a night full of tears, while David Mejia and Danny LaRose both remember it as the night they were on the winning side of history. Nearly 365 days to the day after Donald Trump was elected, the three UM students reflect on this past year as one full of successes and disappointments.

Mejia, a senior born to Cuban and Dominican immigrants, has supported Trump since he became the Republican Party’s presidential nominee in January 2016. Throughout his campaign, Mejia was supportive of Trump’s policies and initiatives.

Being a Trump supporter throughout his presidential campaign was not easy, Mejia said, but now that Trump is president, the negativity in reaction to supporting the president has subdued.

“Now people aren’t speaking about it as much,” said Mejia, a senior majoring in economics. “During the election cycle everyone was so focused on what was going on, and now that he’s president I feel like the stigma, it might still be there, but I don’t feel it as much.”

However, Mejia doesn’t back Trump on all his policies. He said that his support for some of Trump’s actions has “been up and down.”

In a 2016 interview with The Miami Hurricane, Mejia said Latino voters like him must understand Trump’s intentions behind his sometimes unsavory words and policies.

While Mejia is still an avid supporter of most of Trump’s policies, he said he has found major issues with his approach to immigration and extreme vetting.

In January, just days after he was inaugurated into office, Trump signed an executive order banning the entry of citizens from seven Muslim-majority countries, including Iraq and Syria.

“I think there would be better ways to handle and approach things,” he said, “To me, it’s a little unnecessary.”

Despite his disagreement with some of the Trump administration’s decisions, he said he still thinks Trump was the best choice for president. He said one of the best results to come out of Trump’s presidency is the appointment of Neil Gorsuch to the U.S. Supreme Court.

For Angelica Duque, a junior and president of UM College Democrats, Trump’s election was a hard pill to swallow.

Hillary Clinton won the nation’s popular vote by almost 2.9 million votes, according to statistics from the U.S. Elections Atlas. But Clinton still lost the election.

“I just remember crying, crying so much,” said Duque, a political science major.

Duque had spent the majority of her fall 2016 semester working for Clinton’s campaign, phone banking and going door to door for the candidate she thought was the best for the nation’s future.

When Clinton lost the election, she said it took her some time to process. She said as soon as she heard the election results, she began to consider the repercussions a Trump administration would have on her friends and family who are minorities.

She said the past year was “on par” with her expectations for the administration. Some of the worst parts of Trump’s first year came days and months after his inauguration in January, including the implementation of the travel ban and termination of the Deferred Action for Childhood Arrivals program, she said.

“You’re discriminating against someone’s ethnicity or religion,” she said. “And it’s just the start.”

However, Duque said she believes this past year could have been worse if the United States did not have an effective legislative system.

“Thankfully, we have horizontal accountability,” Duque said. “We have checks and balances, so a lot of executive actions have been stopped.”

Libertarian Gary Johnson received more than four million votes running as a third-party candidate in the 2016 election. Sophomore Daniel LaRose, public relations chair for UM Republicans, was going to be one of Johnson’s voters – up until election night. LaRose, who said he was strongly anti-Clinton, decided to vote for Trump at the last minute.

LaRose said Trump’s presidency has been better than he ever expected. As a lifelong libertarian, said he didn’t expect the best from Trump as president. However, as more time has passed, he’s “much happier” with his decision than when he first voted.

“When I made it, I thought it was going to be a bad presidency, but thought, ‘I have to do what I have to do,'” said LaRose, an electronic media major. “But actually each day I’m happier about it.”

He said among the policies he supports most are Trump’s stances on reversing the Affordable Care Act and supporting the second amendment and religious liberties.

“Donald Trump has been the one to take steps toward that and actually get things done,” he said.