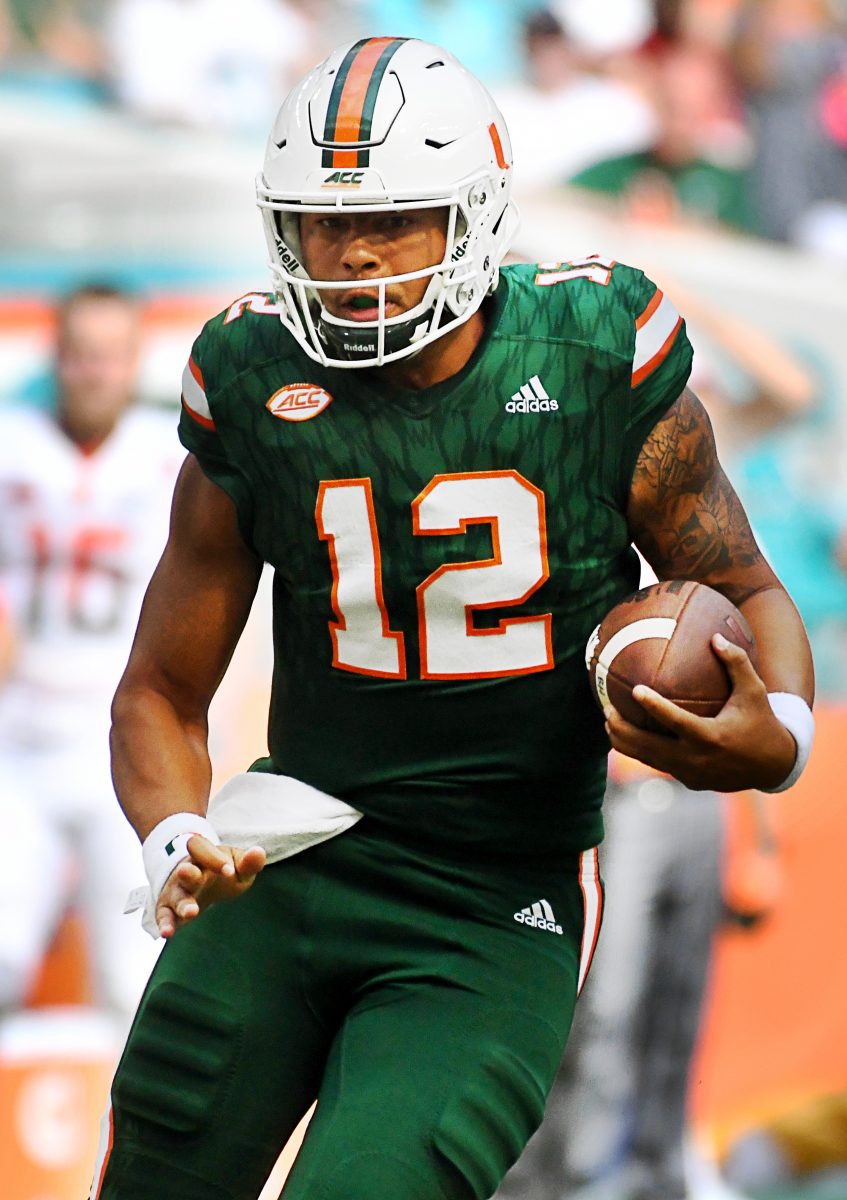 No. 13 Virginia Tech Hokies vs. No. 10 Miami Hurricanes

It’s judgement day for Miami. If the team wants to finally prove to the country that it is a legitimate contender, now is the time to do it.

Six different one-loss teams placed above the Hurricanes in the first College Football Playoff rankings. Miami is undefeated, but many argue the Canes have yet to pull off a signature victory against a top-tier team.

In a primetime matchup against a strong, well-rounded Virginia Tech team Saturday night, UM has a chance to show what it is made of.

The Hurricanes control their own destiny to win the Coastal Division – keep winning and the crown is theirs. But if they lose to the Hokies, it opens the door for V-Tech to win its seventh division title in 12 years.

Miami has been hot and cold all season, especially on offense. Often times, quarterback Malik Rosier and his team have put together consecutive poor possessions but then have come out with a few big plays to put just enough points on the board to win.

Meanwhile, Virginia Tech has been a model of consistency on both sides of the ball, ranking in the FBS top 20 in both points per game and yards per game, and in the top 10 in opponent yards per game allowed.

Here is what you need to know…

Rosier starts 4th quarter with 42-yard pass down the middle to Richards. Miami in striking distance at the 13-yard line.

End of 3rd Q: Miami 21 – Virginia Tech 10. Hurricanes huddling together on field and pumping up crowd as they get ready for final quarter.

Hokies go for it on 4th-and-3, Josh Jackson intercepted off a tip ball by Jaquan Johnson. Ball on Miami 44-yard line.

Miami gets another stop on 3rd down – Virginia Tech is just 3-11 on 3rd downs this game.

Rosier finds tight end Christopher Herndon near the left sideline, and he does the rest. Herndon runs for 43 yards and the touchdown. Miami 21 – Virginia Tech 10. 7:00 left in 3rd quarter.

It’s almost like the Canes refuse to win a game without drama.

Another one. Lackadaisical pass from Rosier leads to another pick. Virginia Tech ball on its own 45-yard line.

Miami opens up half with Rosier pass complete to Braxton Berrios for 18 yards.

Rosier gets sacked. That’s the half.

Josh Jackson finds Cam Phillips for 27-yard completion. Some may say Miami should have had the interception on the play.

Running back Travis Homer with the Waltonesque run – cuts back for 64 yards and the touchdown. Miami 14 – Virginia Tech 0. 7:09 left in 2nd Q.

Rosier using his legs again, this time for a 10-yard rush down the middle.

More pressure in the face of Jackson. Sophomore defensive end Joe Jackson with the quarterback-hurry, forces Jackson to miss his target. 4th down. Virginia Tech punts again. Miami fully in control as of right now.

Rosier to … Guess who? Braxton Berrios for 8-yard touchdown. Miami gets first blood and leads 7-0 early in the 2nd quarter.

After a Rosier run and slide, 3rd-and-3.

Another PI, this time in the end zone involving freshman receiver Jeff Thomas. Another 15-yard gain. 1st down on the VT 15.

Rosier to one of his safety-blanket targets – reliable tight end Christopher Herndon. 18 yards.

Both defenses playing up to their standards – Shaq Quarterman with the stop on Jackson’s run. 4th down. Hokies punt.

Outside of the drive with Rosier’s big run, neither offense has been able to drive down the field. 1st quarter almost done – 2 minutes left.

Miami with a rush on 3rd down … DJ Dallas can’t convert. Canes punt.

On 3rd-and-7, Rosier throws a strike to All-ACC receiver Ahmmon Richards, who makes a nice move to reach for the 1st down. But, he gets up limping like he has in so many games this season. Just unfortunate for Miami.

No way. Defensive back Amari Carter rushes through for the sack on quarterback Jackson. Loss of 10, 4th down. Hokies punt.

Miami defense showing some grit against the run game early – three-yard loss there on the carry.

Another red-zone attempt failed. Hurricanes go for it on 4th down and get nothing on the rush. 0-0 score.

Big, big play from Rosier. Fakes out entire defense with read option, rushes to the left for 36 yards. 1st-and-goal at the 2-yard line.

UM receiver Braxton Berrios once again putting finger prints on game early – catches a pass from Rosier down the middle for 24 yards while getting hit in the air. He has now thrown, rushed and caught for positive yardage. Playmaker.

Miami with a little primetime trickery early – after an option fake, receiver Braxton Berrios throws to his wide-open quarterback Malik Rosier for 17 yards and the 1st down.

Running back Travon McMillian starts the game like many backs have against Miami – with a 1st-down run for double-digit yards.