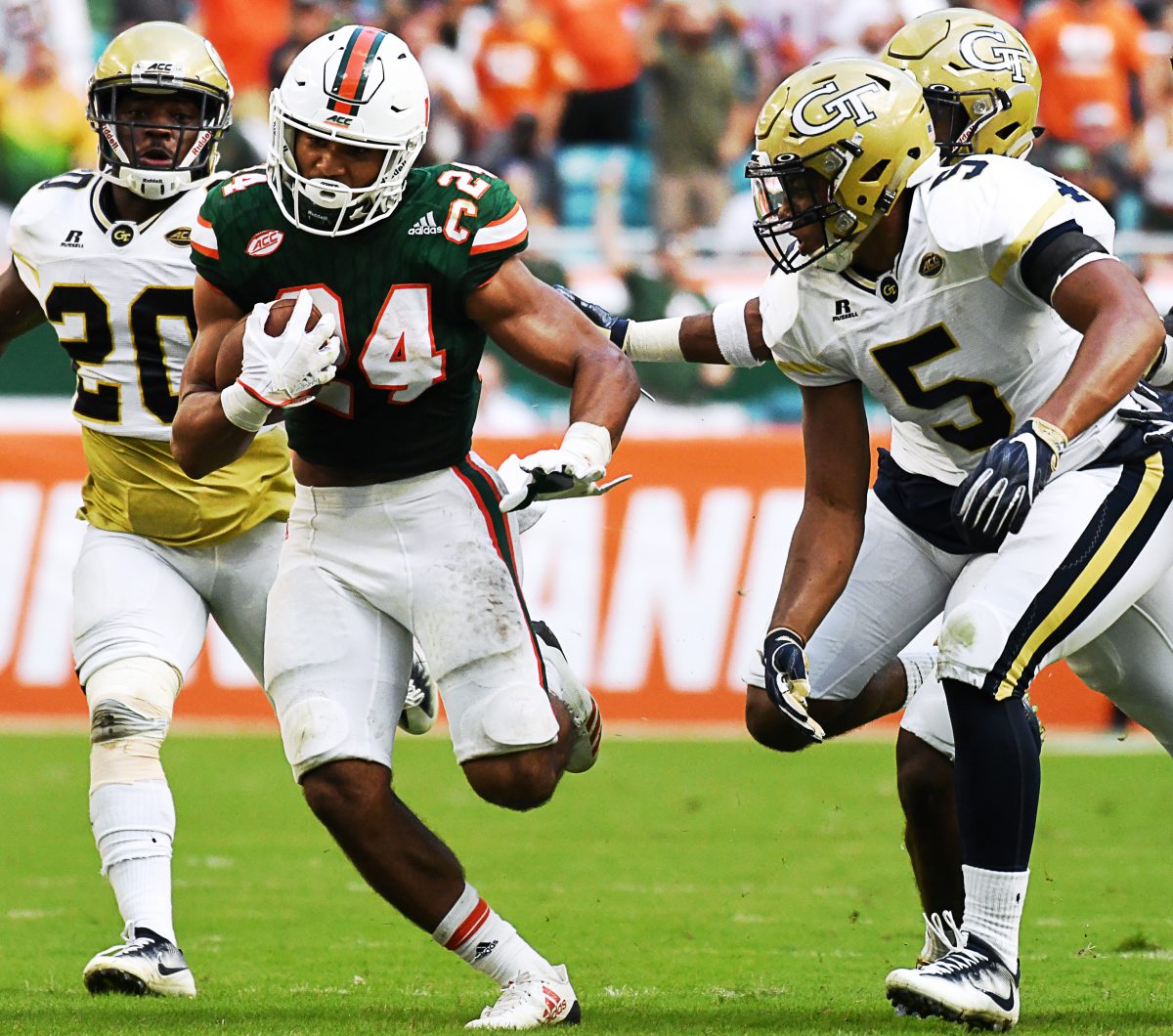 After breaking a seven-game losing streak to the Florida State Seminoles, the Hurricanes have kicked off against their next opponent on Saturday afternoon – the Yellow Jackets. Miami is coming off a week of injuries with four starters marked inactive, while Georgia Tech is coming off a restful bye week.

The Canes must be conditioned physically for the methodical run game of the Yellow Jackets.

Here is what you need to know:

Back-to-back pass completions to Berrios for 14 and nine yards. Who else would you expect to show up during crunch time? Canes at own 31-yard line with under two minutes left to play.

On 3rd and 4, defensive back Michael Jackson breaks up a pass to force 4th down. Yellow Jackets punt.

Hurricanes put pressure on Marshall to force a three-and-out.

On 3rd and 8, Rosier can’t complete pass down the sideline to receiver Berrios. Miami punts.

On 3rd and 4, Harris pulls down Marshall short of the 1st down. GT punts.

Homer rushes for 27 yards and the touchdown. Miami goes for the two-point conversion but does not convert. UM now down 22-24 to GT with 13:36 left in the 4th quarter.

Canes can’t convert after three tries to score from the 3-yard line – settle for field goal. Score 24-16 Yellow Jackets up.

Welcome to Miami, Jeff Thomas. The freshman receiver picks up 70 yards on a pass from Rosier. 1st and goal for the Canes on the 3-yard line.

Big sack for linebacker Zach McCloud – pushes the ball back to the UM 14-yard line. 3rd and 14 coming.

Even long passes are working for the Yellow Jackets – Marshall finds receiver Ricky Jeune for 48 yards to the Miami 17-yard line.

Canes move the ball well down the field, only to get sacked on 3rd and 7. UM punts.

Well that was definitely not the way Miami wanted to start the second half…gives up a 42-yard touchdown return to Georgia Tech off a failed onside kick attempt. Yellow Jackets now lead 21-13.

On 2nd and 8, Rosier throws a dart to Homer for 17 yards and the touchdown. Miami still down 14-13 to Georgia Tech with just 12 seconds left in the second quarter.

Darrell Langham still got some magic left after his game-winning catch? Picks up 32 yards and the first down off a Rosier pass down the middle – Miami’s longest pass play so far. Canes on the GT 22-yard line.

Rosier finds receiver Dionte Mullins for 10 yards and the 1st down. Just 36 seconds left in the half with the ball right around midfield.

Canes got 1:59 to get another score on the board.

Yellow Jackets go for it on 4th down but do not get it, stopped by defensive end Joe Jackson. Miami gets possession.

UM starting linebacker Michael Pinckney looks to have gotten roughed up on the play – he heads to the sideline.

A pass interference call against Miami allows a gain of 15 yards for Georgia Tech. 1st and 10 on UM 44-yard line.

On 3rd and 7, the Hurricanes’ defense get the stop – forces 4th and 4. Yellow Jackets punt.

Marshall easily gets the first down on a QB sneak. Georgia Tech moves the chains, stays rolling.

The Yellow Jackets are going for it.

Badgley hits a 32-yard field goal to bring the score to 14-6 Georgia Tech. 10:11 remaining in the second quarter.

On 3rd and 5, freshman receiver Harley is unable to handle Rosier’s pass. 4th down.

Homer explodes through the gap for 32 yards, bringing his team into the red zone.

Rosier just missed a wide open Mike Harley, but made up for it with what he does best – run the ball as a dual-threat quarterback. He rushes for 13 yards and the 1st down at the UM 48-yard line.

Rosier is throwing just 1-5 for 11 yards thus far. Not good.

Quarterback TaQuon Marshall almost gets sacked on the play, but just gets his first pass off in time – finds wide open Green for the touchdown. That is Green’s second score of the game. Yellow Jackets now up 14-3 at the 14:28 mark of the second quarter.

UM only allows a gain of one on next rush – 3rd and 3 coming.

At the end of the first quarter, Yellow Jackets up 7-3 with ball on the Miami four-yard line. 2nd and 4 coming.

Running back Nathan Cottrell rushes for 24 yards – G-Tech giving Miami all kinds off issues with the triple option.

Zach Feagles punts 50 yards – Yellow Jackets will start on their own 30-yard line with 3:09 left in the first quarter.

Rosier overthrows receiver Lawrence Cager on the route, 4th and 6 for the Canes.

First rush of the game for second-string running back Trayone Gray, who missed all of 2016 with an ACL tear. He gained one yard.

Running back J.J. Green rushes to the right for five yards and the touchdown. Yellow Jackets quickly take the lead back 7-3 at 4:27 mark of first quarter.

The Yellow Jackets are running the ball down the Canes’ throats – running back Clinton Lynch rushes to the right for 48 yards. Georgia Tech in the red zone. 1st down.

Rosier can’t find the target for the touchdown – 4th and 6. Michael Badgley hits a 33-yard field goal to give the Canes early 3-0 lead with 8:10 left in the first quarter.

Homer looking good as the Mark Walton replacement so far, with 34 yards rushing on three carries.

Miami defensive lineman Chad Thomas gets the stop – 4th down for the Yellow Jackets. Punt coming.

UM with a three-and-out on its first possession – punts to Georgia Tech.

Miami running back Travis Homer with the first rush of his career as a UM starter – gains 11 yards on the ground.

Canes quarterback Malik Rosier dodges a sack, but then loses 12 yards on a rush on the first play of the game.

The Hurricanes get the ball first.