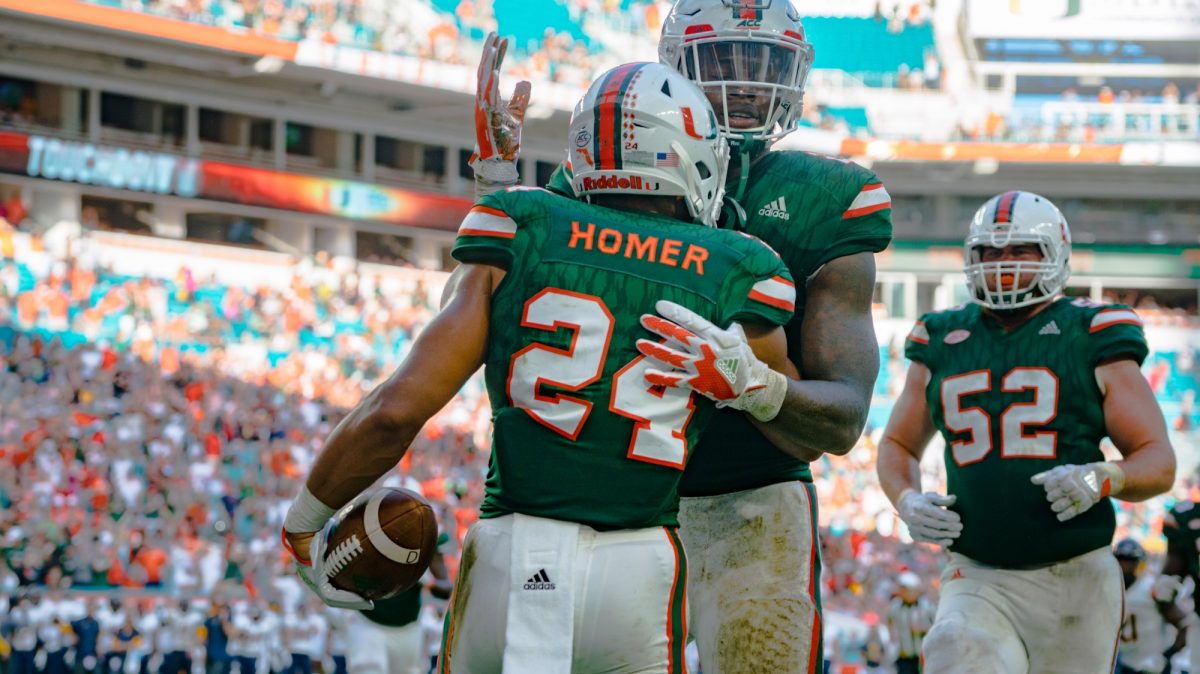 Coming off 1100 rushing yards and 14 touchdown in his sophomore campaign, All-ACC running back Mark Walton was expected to be the focal point of the Miami Hurricanes’ offense this year.

For the first few games of the season, he was. However, Walton suffered a season-ending right ankle injury against Florida State, and the ground game has now fallen onto the shoulders of sophomore Travis Homer.

Homer, who has backed up Walton to this point in the season, has rushed for 207 yards and is averaging a team-high 8.3 yards per carry through the first four games of the season. He’s also hauled in five catches for 71 yards.

“I just know I need to step up…nothing really changes for me,” Homer said after his first full practice as the lead back. “I just have to come out here and work as hard as I can.”

Next man up for Miami. Travis Homer is now the lead back for the Hurricanes after Walton's season ending injury, here's what he had to say: pic.twitter.com/BwBxp58p2Y

Homer’s strong play has gone under the radar – he came in for an injured Walton in games against Toledo, Duke and Florida State. He scored against the Rockets and Blue Devils, and had two pivotal runs for first downs against the Seminoles.

Canes coaches and teammates are confident in Homer’s abilities to increase his role as a playmaker.

“One thing I love about Travis is, from day one, he doesn’t get nervous,” running backs coach and offensive coordinator Thomas Brown said. “I think he’s become more vocal over the last few weeks, even before this last injury with Mark, and I have full faith and confidence in him and everything we do offensively.”

Offensive Coordinator and Running Backs Coach Thomas Brown talks about the RB depth, how Homer and Dallas have progressed and more. pic.twitter.com/UP3PJG0PtH

Homer, a native of West Palm Beach, will now get the majority of the carries on offense. Miami will likely cut back on his snaps with the special teams unit, where he’s been a standout since his freshman season.

When asked if Homer can handle a full 20-carry workload, Brown said “no doubt – he’s as tough as they come.”

His skills have impressed the defensive unit as well.

“He runs downhill very well,” sophomore linebacker Shaquille Quarterman said. “When you look at him, he doesn’t look that tall, but he has the speed to break away from you, and he is physical. He will lower his shoulder on you and we love that about him.”

"We can't be satisfied with a win over Florida State. We have more wins coming." – Shaq Quarterman pic.twitter.com/TuyeW4iHBw

Even with Walton out, offensive lineman Kc McDermott believes the Hurricanes have the depth to continue their success in the rushing game.

“It doesn’t change at all,” McDermott said of the Canes’ game plan. “Travis is a very good backup. We have guys that can fill the spot.”

Behind Homer in the depth chart are redshirt junior Trayone Gray, redshirt sophomore Crispian Atkins and freshman DeeJay Dallas, who has shifted from the wide receiver position to running back. All three are expected to get carries in the backfield.

Gray returned to the field after missing all of 2016 with a torn ACL and has recently gotten his knee brace removed. Coaches say he can both move and bend his knee much better now.

“I think he has earned the opportunity,” Brown said about Gray. “Now he has to take advantage of it. I’m going to give him every opportunity to come into the game. He’s a 235-pound man that can really be fast when he wants to, so he’s in a perfect spot to help this team.”

Atkins, who has played sparingly this season, was awarded a scholarship Oct. 11 and will likely see action in the coming weeks.

Dallas, who came to UM without a specified position, will also see an increased load after shifting to the backfield.

“DeeJay is very talented and very athletic, and we knew that coming in,” Brown said. “I think he’s done a really good job of trying to grasp the system. Obviously, you can’t simulate the contact that you’re going to take until you get into a football game, and we have to get ready for that. We’re planning on all four of those guys to play.”

After beating the Seminoles, the Hurricanes have their sights on a bigger goal, no matter who is in the backfield.

“We can’t be satisfied with a win over Florida State – it was a great win, but that’s not the only win we seek to accomplish this season,” Quarterman said.