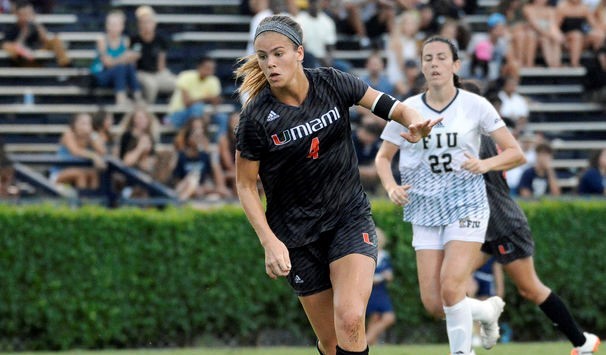 The University of Miami holds student-athletes and coaches to an extremely high standard in the world of college athletics.

The presence of Hurricane Irma only increased the difficulties faced by players and staff. From evacuating campus to readjusting to daily life in the classroom, UM athletes must be even more determined to succeed and represent the communities affected by the storm throughout Florida.

As a safety precaution, the entire team evacuated campus for eight days. During that time, the most important task for the players was to continue training regardless of location.

“Most players had the ability to still train, which was great,” Coach Mary-Frances Monroe said. “There were some players who were affected that did stay in Miami. We just had two.”

When the rest of the players finally got back to Miami, they trained at a high school because campus was closed. Moving practice equipment from the UM campus presented an issue.

“Campus was closed, so all our soccer balls, all our equipment, all the player’s gear was in the locker room,” Monroe said. “In order to help with that, we had the ‘okay’ from administration to get into the building, but only the coaching staff. You can imagine the coaching staff going into a locker room that’s 100 degrees and smells and trying to get everyone’s lockers open to get their equipment out.”

Before Miami’s loss to Virginia Sept. 21, the team lacked access to its own practice facilities.

“We ended up leaving Miami and we traveled to Virginia because we still couldn’t utilize our field, and there was no power,” Monroe said.

“Most of the student-athletes had plans to go or made plans to go with their families or their teammates,” Head Swim Coach Andy Kershaw said.

However, the team did receive some good news about its facilities.

“The pool structurally seems to be in pretty good shape,” Kershaw said.

The swim team has not returned since the campus reopened because it is participating in a tournament in Gainesville, Fla.

Even though problems arose from Hurricane Irma, both coaches spread one message – both teams will use this experience as motivation for the rest of the season.

“We are going to be the best lemonade makers out there,” Kershaw said. “Being back together and not having the additional stresses of the players’ full schedules has been nice and will be a benefit from a team bonding standpoint, but I do know they are all very eager to get back to class and fulfill their roles as student-athletes.”

“You could either be a victim or you can take control of the situation,” Monroe said. “Let’s show who’s going to take control and be resilient.”

Although Canes soccer suffered its first loss since the break to the Virginia Cavaliers, Monroe was still positive about the situation.

“I think out of everything we went through, to lose 1-0 to Virginia on the road and not playing 18-plus days together, I’m really proud of the team,” Monroe said.

Monroe felt that the athletic directors played a key part of keeping the team on schedule during and after Irma.

“I’m very appreciative of our Head Athletic Director Blake James and our Deputy Director Jennifer Strawley,” Monroe said. “Strawley and I are on the phone at least 100 times a day trying to make sure we have the best plans for the women’s soccer team to be successful, and Jenn was amazing. I wouldn’t want a different person helping me out, and she gets it. She made us feel important.”

Hurricanes soccer will return home to host the Clemson Tigers 7 p.m. Sept. 29, and Hurricanes swimming will make the short trip to compete at noon Sept. 30 at Florida International University.