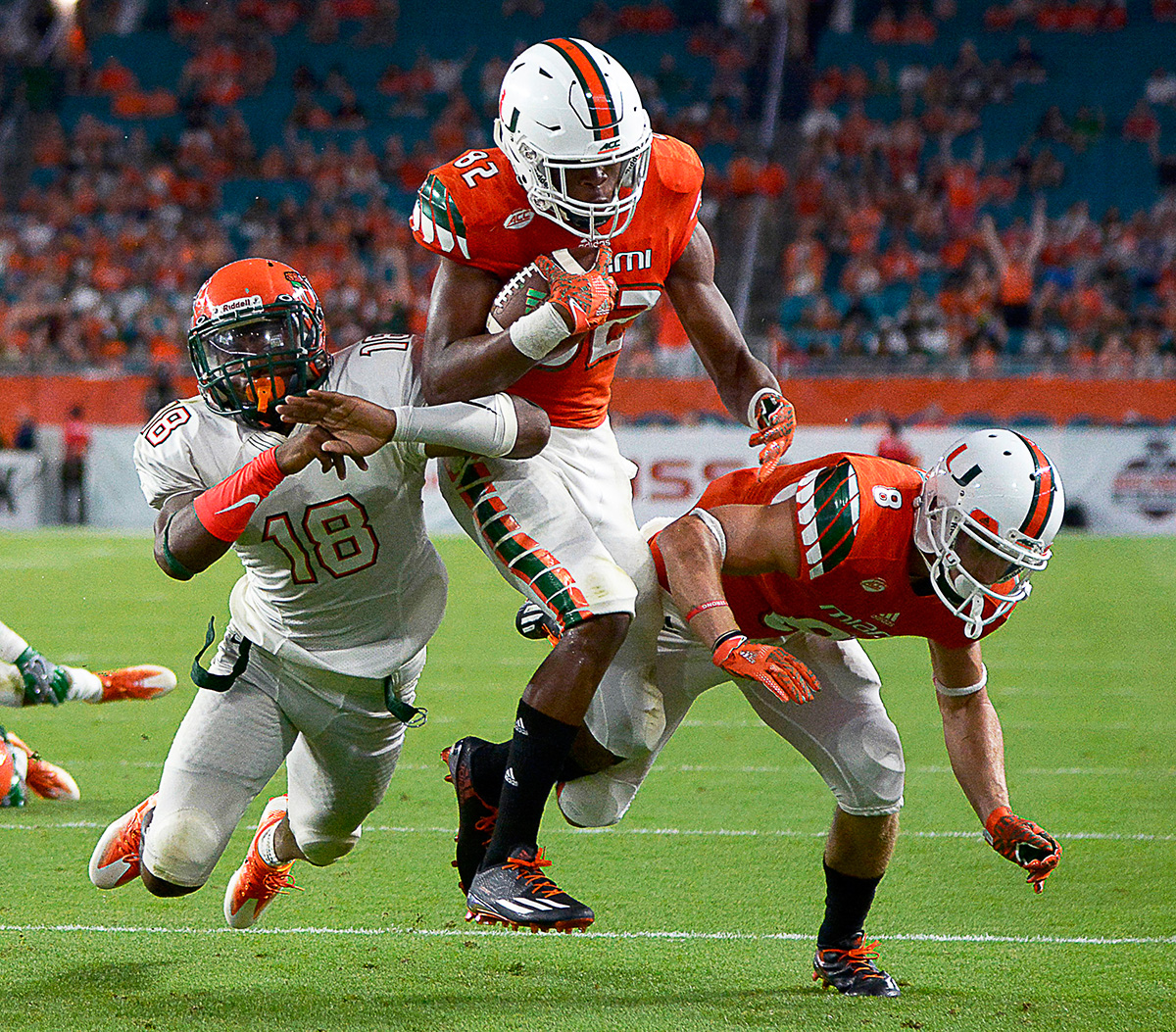 It’s that time of year again.

The Miami Hurricanes will run through the smoke at Hard Rock Stadium Sept. 2 with a new quarterback and one of the top defenses in the nation.

However, the ‘Canes will also excel in dexterity, quickness and depth at the wide receiver position this season.

After his first season as head coach at UM, Mark Richt emphasized the importance of adding more speed at the outside receiver positions during the recruiting process. Richt delivered, with the commitments of wideouts Deejay Dallas, Mike Harley and Jeff Thomas last February.

“The young guys – like you see Jeff [Thomas] run and you see Mike [Harley] run, and it’s like, ‘Wow,’” Wide Receivers Coach Ron Dugans said. “And then you see some of the older guys, you look and see how fast those guys are going … Different guys have shown flashes of how fast they can run, and I think we’ve got the [speed] in that group.”

Dallas, whom coaches have described as a “versatile” athlete, did not have a set position when he first enrolled in the spring. During fall camp, he made an impact as a slot receiver and could also see action as a kick returner and a running back.

“Ahmmon, he’s learning how to be a pro, and that’s the thing that I see in him,” Dugans said. “I told him all offseason, ‘Hey, the honeymoon is over.’ He’s not the unknown guy anymore. Now you’ve got a target on your back.”

Richards, who is questionable for week one against Bethune-Cookman because of a hamstring injury, led all freshmen in the FBS with 934 receiving yards and broke UM’s freshman receiving record previously set by Hall of Famer Michael Irvin.

“When I think of our offense, I think of speed at the receivers’ position,” Richards said. “I feel like we are faster than last year, like we have a lot more depth, guys who can play … I feel like we will scare a lot of people.”

Part of the Hurricanes’ depth at wide receiver comes with the return of redshirt sophomore Lawrence Cager, who missed the 2016 season after tearing his ACL.

“The knee feels great,” Cager said. “I feel like I can go back to dancing. I am making the same cuts like I used to and feel a little faster, so I am not worried about the knee at all.”

With a new starting quarterback in redshirt junior Malik Rosier, the wide receivers have taken it upon themselves to elevate their games in order to smooth the transition past the Brad Kaaya era.

“It’s our job to make them as confident as they can be,” Berrios said. “If they throw a good ball, they have to know that we are going to catch it. That is our main job, and we have to give them that confidence.”

“The ceiling can be really high,” Richards said. “We, the older guys and the guys who played last year, have had a year with the system, and I feel like the young guys are catching up pretty quickly – more quickly than we did last year. Sky is the limit, but it is up to us how far we can go.”