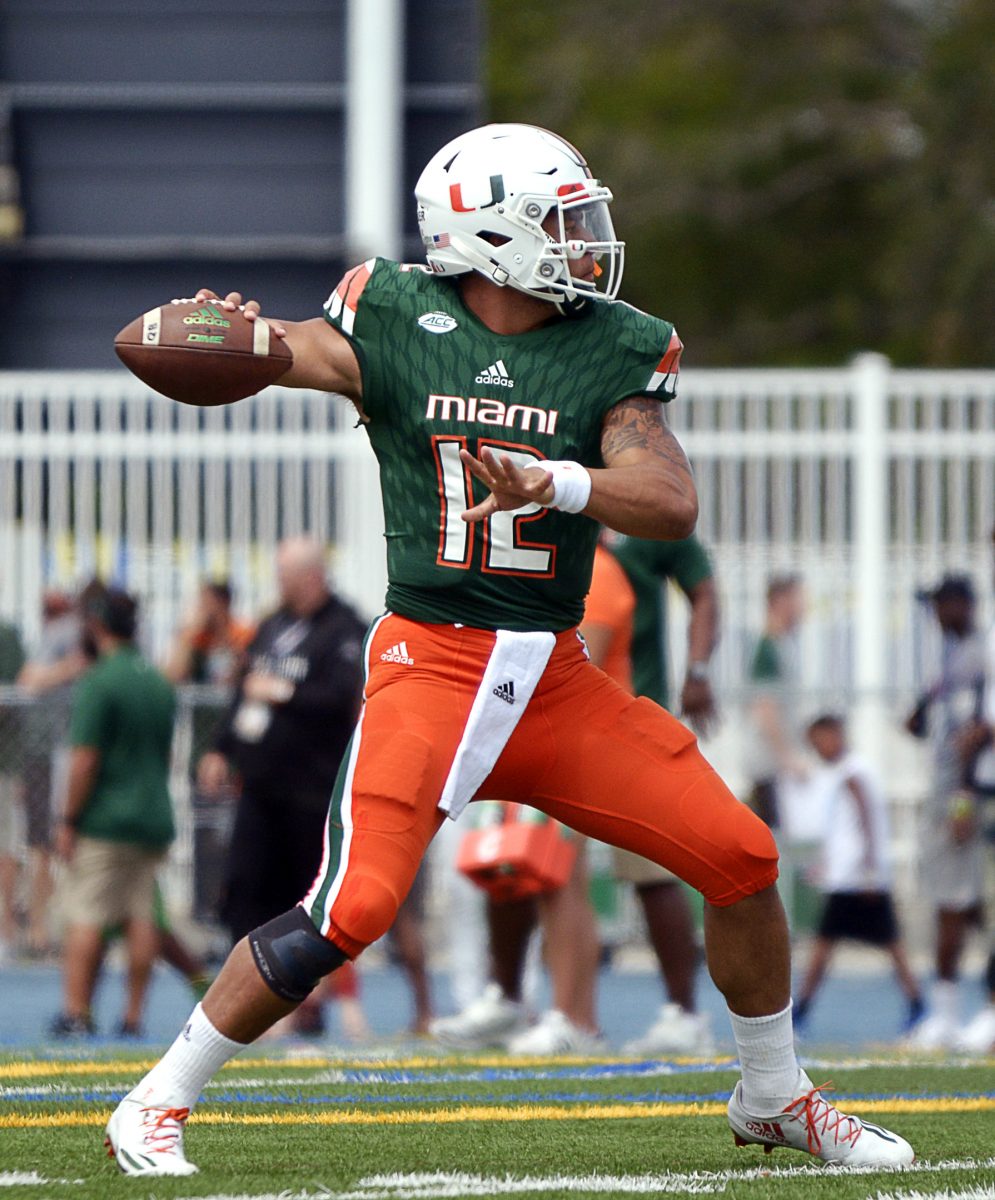 In 2015, Malik Rosier played two Division-I sports at the University of Miami – baseball as a walk-on player and football as a scholarship athlete.

Active in both sports that year, Rosier gained recognition as a quarterback in an impressive 272-yard, two-touchdown passing performance against Duke while then-starter Brad Kaaya was recovering from a concussion. He displayed talent on the baseball diamond as well, batting .294 and knocking out a home run against Rutgers on Feb. 15.

But in December 2015, during bowl game season, Rosier announced that he would no longer play baseball to focus his time on football, particularly improving as quarterback.

Fast forward a couple years, and it looks like Rosier made the correct decision.

After months of competition in spring and fall training camps and questions about who would replace Kaaya, Rosier was officially named the Hurricanes’ starting quarterback by Head Coach Mark Richt Aug. 22.

“He was just like, ‘Malik, I’m naming you my starter,’” Rosier said. “For me, it was a very energizing feeling to know that Coach Richt has enough trust in me to name me the starter for week one.”

Rosier competed against redshirt sophomore Evan Shirreffs and freshmen N’Kosi Perry and Cade Weldon for the starting spot. The coaching staff said experience and consistency separated Rosier from the rest of the pack.

“Focus, discipline and accuracy,” Richt said. “He showed up focused every day on his job. He was disciplined in his fundamentals, his footwork, his reads, his passing fundamentals. And he was hitting his target. He did a very good job.”

In Miami’s three scrimmages during fall training camp, Rosier threw seven touchdowns to just one interception, completing 61 percent of his passes. His numbers were clearly the best of the bunch.

Going into this season, Rosier was the only quarterback in the running with collegiate game experience. Shirreffs, who played on the practice squad in 2016, showed he grasped the system but didn’t display the level of performance that Rosier did. As of right now, he is No. 2 on the depth chart as the official backup quarterback, with Perry at No. 3 and Weldon at No. 4.

“I felt like there was enough of a difference to feel comfortable that Malik was the guy,” Richt said. “The young guys … they got to know what to do and own it for a while before they can really compete at a high level at that position.”

Rosier has received immense support from his teammates since the announcement, chanting his name when Richt first shared the decision.

“He really pushed himself throughout the spring and the fall,” redshirt junior wide receiver Darrell Langham said. “I was happy when he won it. In the huddle, he is telling us what to do, telling us that ‘we got this,’ to push. Even when things are going bad, he’s the one leading us through the whole thing.”

For Rosier, the encouragement he has consistently felt from his teammates before and after the decision is what has helped him settle into the starting spot.

“I just felt camaraderie,” Rosier said. “The guys, they just stayed with me, stayed around me, and they helped me out through the whole way. That’s just love – the quarterbacks are happy for me, the receivers [are as well]. It’s just one big family.”

In his UM career so far, Rosier has completed 31 of his 61 passes for 370 total yards with two touchdowns and three interceptions. He rushed for 63 yards and a touchdown on 16 carries.

Known for being a dual-threat quarterback, Rosier demonstrated the ability to throw and run the football. However, despite having a strong arm, he has not been the most consistently accurate passer, especially on short throws. He has recently improved immensely in this area.

“His maturity, his decision making,” senior receiver Braxton Berrios said. “He’s always had great athleticism, but in his younger years, when he got flustered or got rushed, he would make bad decisions. In that aspect, he has grown tremendously.”

As the official starting quarterback, Rosier will direct his focus toward the season opener and what he can do to lead the ‘Canes to victory.

“Being consistent, continuing to develop – I think he has a long way to go, along with the rest of our offense,” Offensive Coordinator Thomas Brown said. “But I think he’s obviously taken the lead and it’s his job to lose.”

Miami is set to kickoff at 12:30 p.m. Sept. 2 at Hard Rock Stadium against Bethune-Cookman.