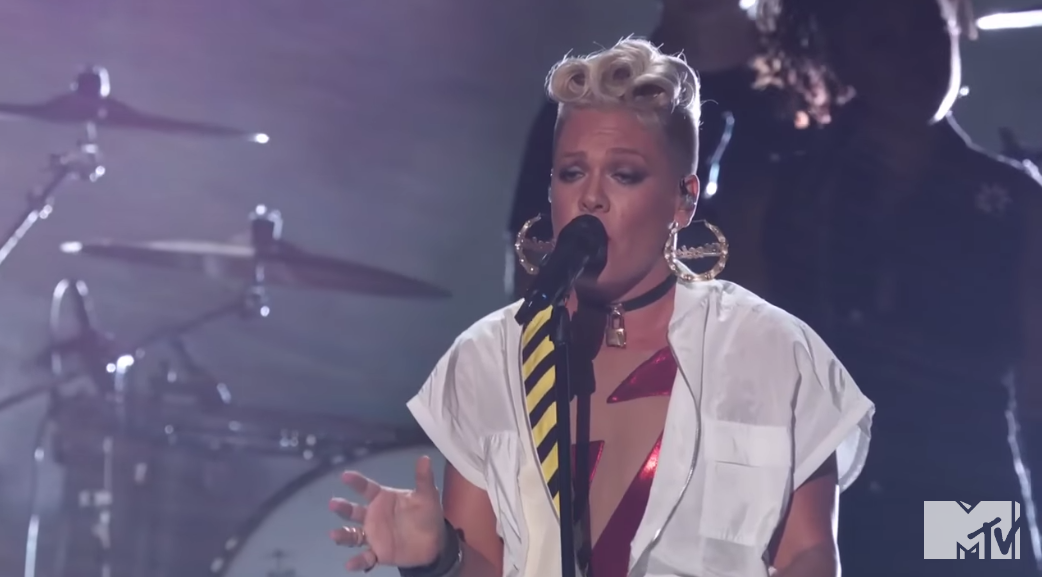 Departing from its traditional flashiness, the 2017 MTV Video Music Awards (VMAs) was marked by a somber mood, with calls for unity and inclusivity paired with performances ranging from heartrending to comedic and bizarre.

The event, hosted by Katy Perry, took place at The Forum in Inglewood, California. Khalid, Cardi B and Bleachers put on pre-show performances.

Kendrick Lamar, Lorde and P!nk gave noteworthy performances. P!nk, the recipient of the Michael Jackson Video Vanguard Award, performed songs from her entire musical career, including “Raise Your Glass” and “Get The Party Started,” while riding a floating Cadillac and a lawnmower.

After her performance, P!nk gave an emotional speech about body image. She cited a recent conversation with her daughter and used that as inspiration for the speech.

“I went home and made a Powerpoint presentation for her,” P!nk said. “And in that presentation were androgynous rock stars and artists that live their truth and are probably made fun of every day of their life.”

After receiving many award nominations, Kendrick Lamar took home six of the evening’s Moon Men, including Best Video, Video of the Year and Best Hip-Hop Video.

Lamar also performed an electrifying medley of “DNA” and “HUMBLE,” complete with commentary from Fox News, videos of police brutality and stuntmen climbing up a wall of fire.

“You are not alone,” Leto said. “There is always a way forward. Reach out, share your thoughts, do not give up.”

Susan Bro, mother of Heather Heyer — who was killed in Charlottesville, Virginia — also made an appearance. In an emotional speech, Bro announced the creation of the Heather Heyer Foundation.

“I want people to know that Heather never marched alone,” Bro said. “She was always joined by people from every race and every background in this country.”

The night was filled with emotional moments as well as surprising collaborative performances.

DNCE and Rod Stewart took to the stage for a special edition of Stewart’s 1978 hit “Da Ya Think I’m Sexy.” The performance was a true flashback to the ’70s, with Stewart and DNCE frontman Joe Jonas decked out in sparkling suits.

The most unexpected duet came from Artist of the Year winner Ed Sheeran and Lil Uzi Vert, who took home the Song of the Summer award for XO TOUR Llif3.