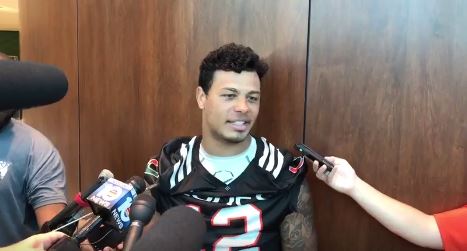 Since officially being named the Hurricanes starting quarterback on Tuesday morning, redshirt junior Malik Rosier has received nothing but support from his coaches, teammates and even some former UM greats.

Rosier received messages from former Miami quarterbacks Brad Kaaya – whom Rosier backed up for two years in 2015 and 2016 – Gino Torretta and former Miami running back Edgerrin James, who ranks third in all-time rushing for UM.

Head coach Mark Richt and his staff say it was Rosier’s consistency that ultimately won him the job as the No. 1 man under center. When Rosier’s teammates heard the news, they immediately chanted his name.

“He really pushed himself throughout the spring and the fall,” Redshirt junior receiver Darrell Langham said. “I was happy when he won it. Even when things are going bad, he’s the one leading us through the whole thing.”

Despite all the excitement surrounding the news, when Rosier spoke to the media for the first time since the announcement on Wednesday, he admitted that it has yet to really sink in.

“As soon as I got home, I ate and crashed,” Rosier said. “I was so exhausted from practice. I haven’t really got the chance to sit down and say, ‘Wow, I’m the starting quarterback for the University of Miami.’ It will probably come sometime today. I got a little freer today. I’ll probably relax and talk to my mom about it.”

It was not the prettiest practice for Miami on Wednesday morning – there was a weather delay midway through for the first time in fall camp – but that didn’t stop reporters from gathering on Greentree Practice Fields, with all eyes on Rosier.

“I think he’s a really good leader,” offensive coordinator Thomas Brown said. “I think the guys respond to him well. He has a great personality. He speaks up and is vocal in the huddle.”

The Canes participated in a shortened practice without pads in preparation for the team’s third scrimmage on Thursday.

– Left tackle Kc McDermott, who has been bothered by a foot injury this past week, took part in practice.

– Wide receiver Ahmmon Richards was out with a pulled hamstring, and he was seen riding the stationary bike.

– Linebacker Mike Smith played with the first-team defense, ahead of Michael Pinckney.