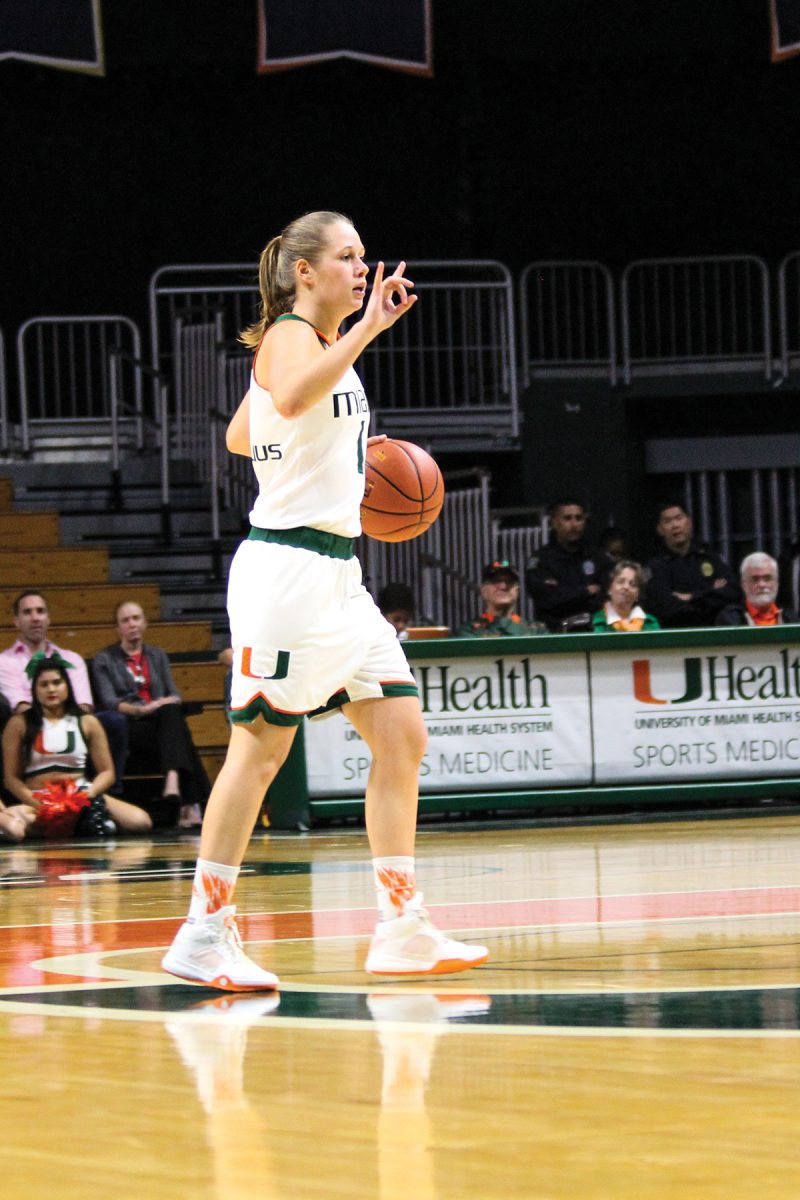 The 2016-2017 season was one of the best in the history of University of Miami women’s basketball.

The Hurricanes finished with a 24-9 record and advanced to the semifinals of the ACC Tournament, where they lost a close match against the Duke Blue Devils. As the fourth-seeded team, Miami was able to host the first two rounds of the NCAA Tournament at the Watsco Center.

The season ended abruptly when the Canes were knocked out in the second round of the tournament by the Quinnipiac Bobcats. However, now that more than a month has passed since the defeat and spring practices have started, the focus is on the future.

With four graduating seniors, three of whom are headed to the WNBA, UM will turn to a younger group to lead next season.

One of those players is rising junior Laura Cornelius, who will have a lot more on her shoulders. She is expected to be the starting point guard and said she feels that she is prepared for the all the challenges that the position brings.

“There are expectations, but I don’t really feel pressure at all,” Cornelius said. “Obviously, I have to step up my game. I have to become more of a leader and I understand that I need to take more shots and score more.”

Cornelius isn’t the only one who will have more responsibility next season. The Canes will rely on forwards Emese Hof and Erykah Davenport to produce in the paint. The three represent Miami’s best returning scorers but only accounted for 30 percent of the team’s points last season.

Cornelius said she recognizes the Hurricanes will need to focus more on defense and intangibles in order to win games next season.

“Defense wins games, and we’ve been working on the details of defense throughout spring workouts,” Cornelius said. “If we can’t score 70, we have to play defense and keep them to 50 and we score 60.”

Even though Miami will lose one of its most talented senior classes to date, it will also bring in one of the best recruiting classes in school history. The Hurricanes have five incoming freshman, three of whom are ESPN Top-100 recruits, who are expected to produce.

Rising senior Davenport said she knows that she and the other returning players will have to lead the freshmen in the right direction.

“I have to lead and be the player that everybody wants to play with,” Davenport said. “I have to make them feel like I’m someone to be considered as a leader, someone they respect. I have to own the role of being a leader.”

UM has an uphill battle ahead.

The Canes play in the ACC, a conference in which seven teams advanced to the NCAA tournament and five teams hosted in the first two rounds. Cornelius said she recognizes that people expect Miami to have an off year but believes that it can continue to have the success it’s had in the past.

“The world expects us to be kind of bad, but we have a group of girls right now that are so excited to step up and try to raise this program to another level,” Cornelius said. “We’re really excited to go out there and take on any challenge and be a great team.”