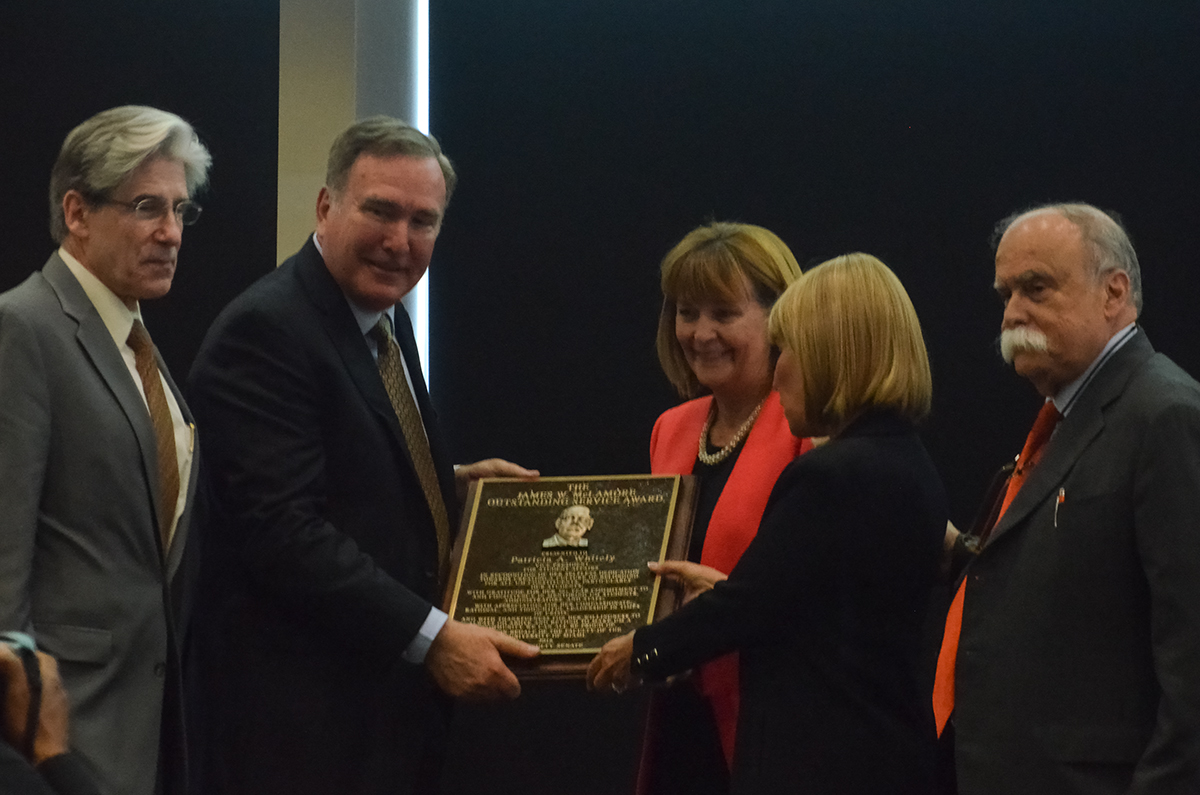 Vice President for Student Affairs Patricia Whitely was recognized with the James W. McLamore Outstanding Service Award by the Faculty Senate Monday during its annual ceremony at the Newman Alumni Center.

The McLamore Award, named after former chair of the University of Miami Board of Trustees and co-founder of Burger King, recognizes service “above and beyond the call of duty.” Whitely has been at the university for more than 30 years, overseeing student affairs for two decades. She expressed her thanks at the ceremony for the university administrators who “took a chance” on a 20-something-year-old Whitely.

In his opening remarks, UM President Julio Frenk called Whitely a person who had a “deep wealth of compassion” and acted as a “strong and caring shoulder” for UM families to lean on through difficult times.

For Student Center Complex Associate Director Brandon Gross, Whitely is an example of an administrator with commitment to the needs of students and staff.

“She truly goes above and beyond on behalf of the student body,” Gross said. “Dr. Whitely makes sure that students are involved in the decision-making process on campus and that their thoughts and feelings are known by her colleagues … She is there to support her team while challenging them to be better at what they do for the overall positive impact it will have for our university community.”

Whitely is the 24/7 monitor on university happenings, leading the Division of Student Affairs in addressing crises and other important matters. When thanking her husband, George, she called him “the wind beneath my wings” and said he was the person who answered her phone when she received middle-of-the-night calls.

She also thanked her friends and mentors for believing in her and said that her goal on campus was to help students achieve as much as possible.

In 2016, the annual Women’s Leadership Symposium for undergraduates was endowed and named after Whitely by the family of a past UM student who was impacted by the vice president. The Emergency Assistance Fund was also named after Whitely in 2011. She also received the Spectrum Award in education from the Miami chapter of the American Red Cross.