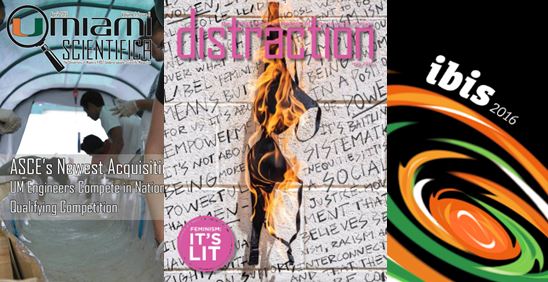 Distraction Magazine, UMiami Scientifica and Ibis Yearbook were awarded Crowns for their work in 2016. Crown Awards are the highest recognition from the CSPA given to student publications around the nation that exhibit excellence in content, design, photography, writing and editing.

Distraction Magazine, which is releasing its arts issue in April, received two Gold Crowns for its 2016 print magazine and its hybrid publication, which includes its website. The winning issues were edited by former Editor-in-Chief Rori Kotch, now a graduate student in the School of Communication, and the winning website by former Online Editorial Coordinator Renee Perez and former Online Managing Editor Veronica Lopez. Distraction has received multiple national awards since its creation in 2010.

Current Editor-in-Chief Asmae Fahmy, a senior double-majoring in psychology and journalism, called the win “an honor.”

“The photo editor at the time, Valentina Escotet, took awesome photos of a girl in a bathtub and a burning bra,” Fahmy said. “It’s a very creative and edgy spread.”

Distraction Magazine publishes in print twice a semester; its print copies are available on the green magazine stands around campus.

UMiami Scientifica magazine, founded just two and a half years ago, received a Gold Crown for its hybrid publication edited by Victoria Pinilla, the former editor-in-chief. This was one of five hybrid Crowns awarded by CSPA. The young science publication, advised by microbiology professor Roger Williams, was cited by CSPA Director Edmund Sullivan as the most unique publication entered in the competition.

“I think Scientifica stood out because we represented the inquisitive spirit within us as scientists,” said Mancao, who will graduate this spring with a triple-major in microbiology and immunology, neuroscience and economics.

Scientifica also publishes twice a semester and can be found on the black magazine stands around campus.

“While students may not realize it now, five, 10, 15 years from now they will be glad they have a yearbook to look back on,” said Castillo, a sophomore marketing major. Castillo is one of the youngest students to hold the editorship.

In individual competition, the Ibis Yearbook picked up 52 awards, dominating the design-related categories and receiving recognition for sports features and alternative story form. Copies of the Ibis Yearbook are available around campus and are included in the student activities fee. Graduating seniors will receive copies of the 2017 Ibis over the summer. Students still have an opportunity to take their yearbook pictures until April 5 on the second floor of the Shalala Student Center.

The full list of CSPA honorees is available here.

Read other award-winning pieces from The Hurricane: