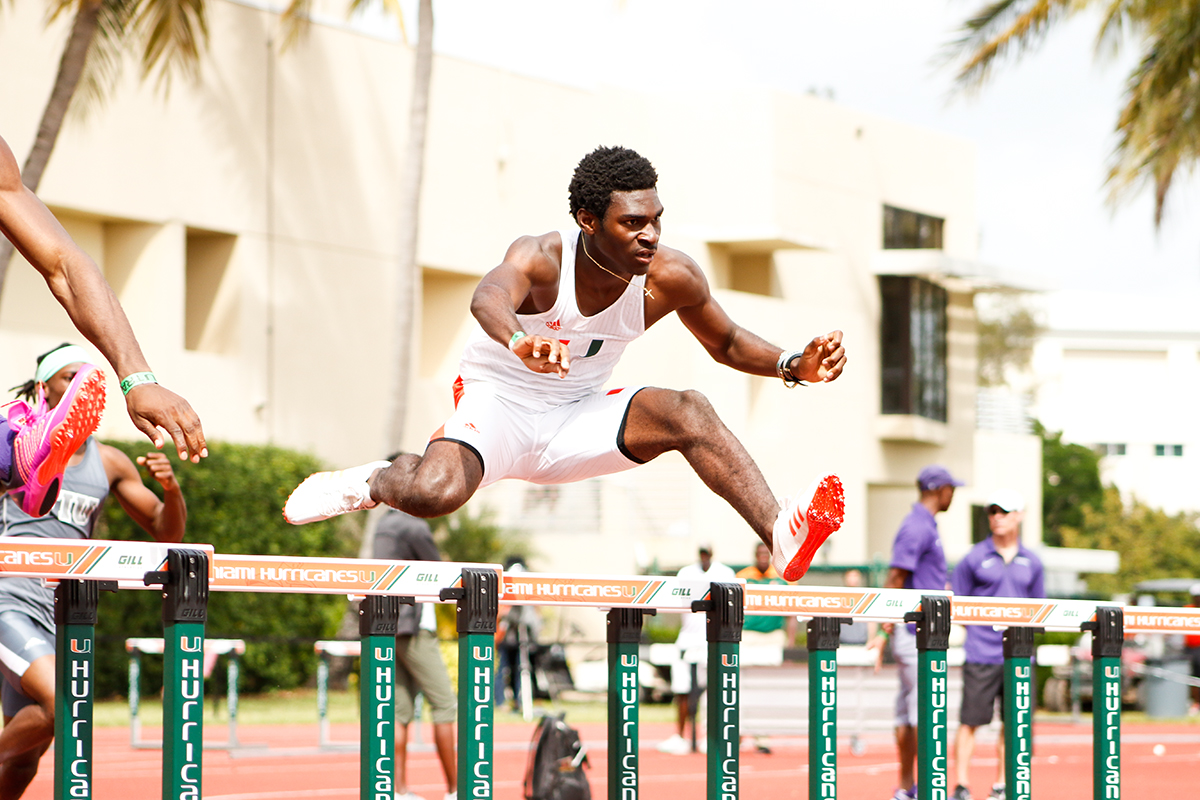 Miami Hurricanes track and field hosted the Hurricane Collegiate Invitational on Saturday. The competition was the second of three meets hosted at Cobb Stadium this season.

The No. 16 women’s team competed against nationally ranked opponents, including No. 6 Florida and No. 14 Harvard. Men’s competition featured top-ranked and indoor national champion runner-up Florida, and No. 6 Virginia. A host of All-Americans, two Olympic trials participants and Olympic champion Kerron Clement competed at the meet.

“I try to get shorter and quicker too soon in the curve instead of coming off the curve and then shortening my steps to progressively get faster,” she said.

Brittny Ellis finished in second place in the women’s 200m dash with a time of 23.36 seconds.

Morrison ran a time of 13.21 seconds to win the women’s 100m hurdles, while Michelle Atherley finished third at 13.66 seconds. Morrison, a Second-Team All-American in the 60m hurdles, believes there is room for improvement in the event heading into the Florida Relays next week.

In addition to snapping down her lead leg, her keys to next week are “pushing out the blocks and being more aggressive in the race.”

Gabrielle Hesslau ran the second-fastest women’s 3000m time in school history. She finished second with a time of 9:41.40.

In field, Emily Gale is still undefeated in women’s pole vault. Her mark of 3.90m is a season best. Stefani Kerrison’s mark of 6.01m was third best in the women’s long jump.

For the men, the 4x100m relay team ran among the fastest squads in the country. Isaiah Taylor, Myles Valentine, Brandon Taylor and Breon Mullings made their outdoor debuts in the event, finishing third as a group with a time of 40.20.

Valentine was happy with the time but believes consistency will be key heading into next week.

Mullings joined Henri Delauze, McKinly Brown and Ibrahim Dodo in the men’s 4x400m relay. The quartet fought closely against the University of South Florida but fell to second place on the home stretch. The time of 3:10.49 is a season best.

Carlos Mangum and Andreas Christodoulou led the way in men’s field events. Mangum had the third-best hammer throw – the mark of 64.59m is a season best. Christodoulou also had a third-place finish; he had a long-jump mark of 6.95m.

Aiyanna Stiverne, Atherley, Ellis and Morrison made their outdoor season debuts at the meet. Atherley’s pentathlon performances during the indoor season earned her First-Team All-America and ACC Indoor Field Performer of the Year honors. Atherley, Stiverne and Ellis also made First-Team All-America in the women’s 4x400m relay with Shakima Wimbley.

Wimbley has yet to debut this outdoor season. Recently named ACC Indoor Track Performer of the Year, the senior’s national championship win in the women’s 400m dash earned her First-Team All-America honors in the event.

The Canes will travel to Gainesville for the Pepsi Florida Relays on Friday and Saturday. SEC Network Plus and Watch ESPN will broadcast the meet. For more information, click here.