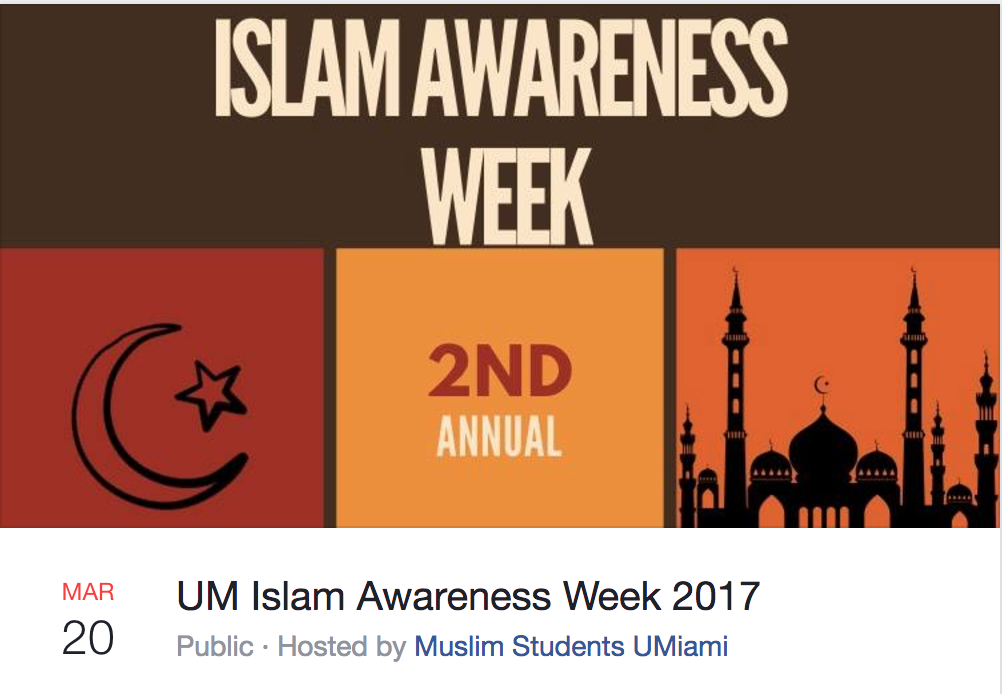 Update, 9:37 a.m., March 19: Samuels said she was was given administrative approval on Friday afternoon to host The Truth of Being a Woman of Islam: Counter Info Session. The event will take place on Tuesday from 2 to 4 p.m.

University of Miami student Sarah Samuels was concerned when she saw the list of events for Islam Awareness Week, which starts Monday and is hosted by Muslim Students of the University of Miami (MSUM). The goal of the week, MSUM Outreach Coordinator Aisha Khan said, is to create an open dialogue about Islam and dispel myths about the religion’s teachings and practices. One of the events, Hijab-a-thon, will allow UM students to “learn what it means to wear the hijab as a Muslim woman,” according to the event Facebook page.

But this seemed like “rose-colored representation” of the struggles Muslim women face, Samuels said, so she took to Facebook to say she was organizing her own event on the same day — called The Truth of Being a Woman of Islam: Counter Info Session — in partnership with Turning Point USA, a conservative nonprofit that has a chapter at Florida International University.

“This is in contrast and protest of the misinformation to be disseminated by the Islamic Student groups hosting the Hijab-a-thon,” Samuels wrote in a Facebook post. “Stop by and show support, or come speak with us to learn the real truth about women and Islam!”

Her plan is to hand out pamphlets and information from non-political non-profit organizations, such as UNICEF, and interview students to gauge their knowledge about Islam. Mostly, though, she said she doesn’t want students to get “very heavily biased” information on what it’s like being a Muslim.

“It’s more than just putting on a hijab on a college campus in the United States of America,” Samuels said in a phone interview. “Being a woman of Islam often comes with many dangers.”

Samuels said she was emailed by Dean of Students Ricardo Hall on Thursday afternoon and informed of the proper procedures for organizing an event, which she said she wasn’t aware of before, so she is awaiting administrative approval in order to host the information session.

“Initially, we got a pretty positive response,” she said.

The request requires several signatures and must be approved at least two business days before the proposed event date. Hosting an event without permission could result in disciplinary action, according to the student handbook.

The university sent a statement to The Miami Hurricane affirming the rights of all students to organize events, so long as they abide by the handbook and make the proper requests and reservations ahead of time.

“As outlined in the University of Miami 2016-2017 Student Rights and Responsibilities Handbook: ‘The University of Miami supports the rights of individual students and student organizations to demonstrate, provide such activities do not disrupt normal activities or infringe upon the rights of others.’  When or if a demonstration request is received, it will be considered under this basic premise and taking into account available space during the requested timeframe.”

“We are not protesting Islam Awareness Week. We are just trying to ensure that there’s a balanced promotion,” she said. “So students aren’t misled.”

Samuels, a junior majoring in biochemistry and minoring in Judaic studies, transferred to UM from Nova Southeastern University. She founded the South Florida chapter of Pink Pistols, a national non-partisan organization formed to educate the LGBT community on gun safety.

She said she plans to start a Turning Point USA chapter at UM in the Fall.

Khan said she found out about the counter-event when another MSUM member sent her a screenshot of Samuels’ post.

“At first I thought, ‘She has every right to do that, it’s free speech. She’s just as qualified as we are to be there,'” Khan said. But then she saw another post in which Samuels called Islam “evil” and a “disease” that should be banned from the United States.

Concerned members of MSUM reached out to Hall, University of Miami Police Department (UMPD), Vice President for Student Affairs Patricia Whitely, and Khan said all were “so supportive.”

There will be UMPD officers at the events throughout the week to ensure things don’t get out of hand should there be confrontation, Khan said. She said she would like to have a conversation with Samuels about Islam because she understands why Samuels and like-minded people believe certain things about the religious practices such as wearing a hijab.

“I want to be able to talk to her. This is the whole reason we’re doing this. If everyone thought Muslims were amazing, there would be no reason to have Islam Awareness Week,” Khan said.

The Standing Committee on Diversity, Equity and Inclusion (SCDEI), formed in December 2015 under UM President Julio Frenk’s Culture of Belonging initiative, took a stance on the matter, saying members of MSUM “should be able to engage in approved activities and discussions without hate speech directed toward their group or members.” SCDEI released the following statement on Friday:

“Standing Committee for Diversity, Equity, and Inclusion supports the upcoming Islam Awareness Week as an effort to engage in dialogue and programming helps to educate, raise awareness, combat stereotypes and promote inclusion … As an institution of higher education that holds diversity as our first value, respectful and open dialogue about our differences is critical. The SCDEI appreciates any effort to do so and it is unfortunate that Islamic Awareness Week has been characterized with discriminatory comments on social media. These kinds of hateful reactions to the authentic efforts of students to engage in peaceful, respectful dialogue and exchange, reduce our collective efforts to create and maintain an inclusive and equitable climate. The SCDEI denounces disrespect and hate wherever it appears in our campus community. We affirm our commitment to diversity, equity, and inclusion of all members of UM. We all belong here.”