These are just a few of the phrases that might describe UM’s undergraduate production of “Spring Awakening,” the Tony-Award-winning musical playing at the Jerry Herman Ring Theatre until Saturday. “Spring Awakening,” now playing at the Jerry Herman Ring Theatre on Miller Drive, tells a story of sexual discovery and tragedy in a community of German teenagers. Students get in free with a Cane Card at the Totally Tuesday 8 p.m. show. Photo courtesy Lisa Dozier King.

The gutsy, young rock musical may not be for everybody. Even though this adaptation has already been toned down from the original production, several scenes will leave you shifting in your seat. On opening night, an entire group of audience members sitting in one of the front rows left after intermission.

But if you are brave enough to venture to see the show, you will find yourself entirely captivated.

The provocative musical, with book and lyrics by Steven Sater and music by Duncan Sheik, was adapted from an 1891 play about young people discovering their sexuality in a conservative, religious German town. Under the direction of theatre arts professor Laura Rikard, the show is bursting with talent from all the (figurative) corners of the stage, and  the challenging roles spotlight the male talent in the theatre department in ways we have never seen before.

Junior Andrew Gryniewicz (“Children of Eden”) convincingly captured the intelligence and frustration of protagonist Melchior Gabor.  Melchior’s deal is that everyone in his town seems to have no curiosity about anything beyond what they already know (“All That’s Known”). Also, like all the other characters, he’s itching to get some action (“Touch Me”) and finds himself drawn to Wendla Bergmann, the female lead played by junior Emma Harper. The parents of all of the characters try their best to keep their children in the dark about sex (“Mama Who Bore Me”), but well-read Melchior decides to enlighten his male peers about female anatomy. This includes his friend Moritz Stiefel (junior Branden Holzer), a nice, timid guy who always seems to be down on his luck. Between his wet dreams (“The B—- of Living”) and his grades, Moritz seems to struggle with everything, and Holzer (“Children of Eden,” “As You Like It”) once again pulled off one of the strongest performances in the show. While Gryniewicz’s Melchior glowed with conviction, Holzer’s Moritz rocked the stage with unbridled nervous energy (“And Then There Were None,” “Don’t Do Sadness”). One bone to pick is that the roles of Wendla and Ilse Neumann (senior Ellie Goldenberg) were played safely. It would be nice to see the female leads inhabit these characters more comfortably during their solo moments. As the week goes on, they may have a chance to further settle into these complex characters.

Nonetheless, the best thing about “Spring Awakening” is its ability to showcase the talent of its entire cast through high-energy ensemble numbers. The show made great use of lighting and its simple set. The Frost musicians did the instrumentals justice. Vocal solos from both the leads and the supporting cast were incredible, the harmonies raised goosebumps, and the cast brought its all while raucously dancing and jumping over the set during numbers like “Totally F—ed.”

Junior Matt Paris and senior Madelyn Paquette rotated through their many different roles with relish, playing everything from draconian school administrators to sexy piano teachers. Junior Emma Freeman also surprised audiences in her riveting portrayal of Martha, a schoolgirl with a haunting secret (“The Dark I Know Well”).

Without revealing too much, “Spring Awakening” manages to be funny, tender, exhilarating and bittersweet in the course of a couple of hours. Those who are not easily squeamish will find themselves wanting to see the show again and again, possibly playing the Spotify cast album on repeat for the weeks afterward.

Student tickets are $10 with a Cane Card. During the Ring Theatre’s Totally Tuesday events, tickets are free for students on a first-come, first-serve basis. The Tuesday performance will also be followed by a discussion in conjunction with the UM LGBTQ Student Center.

Rating: Recommended for those 15+ years in age. 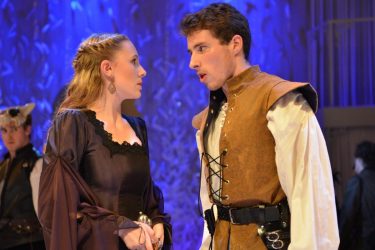 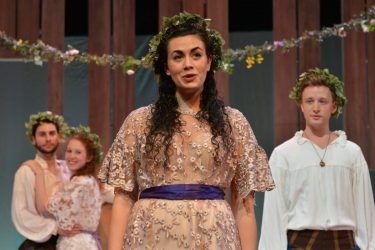