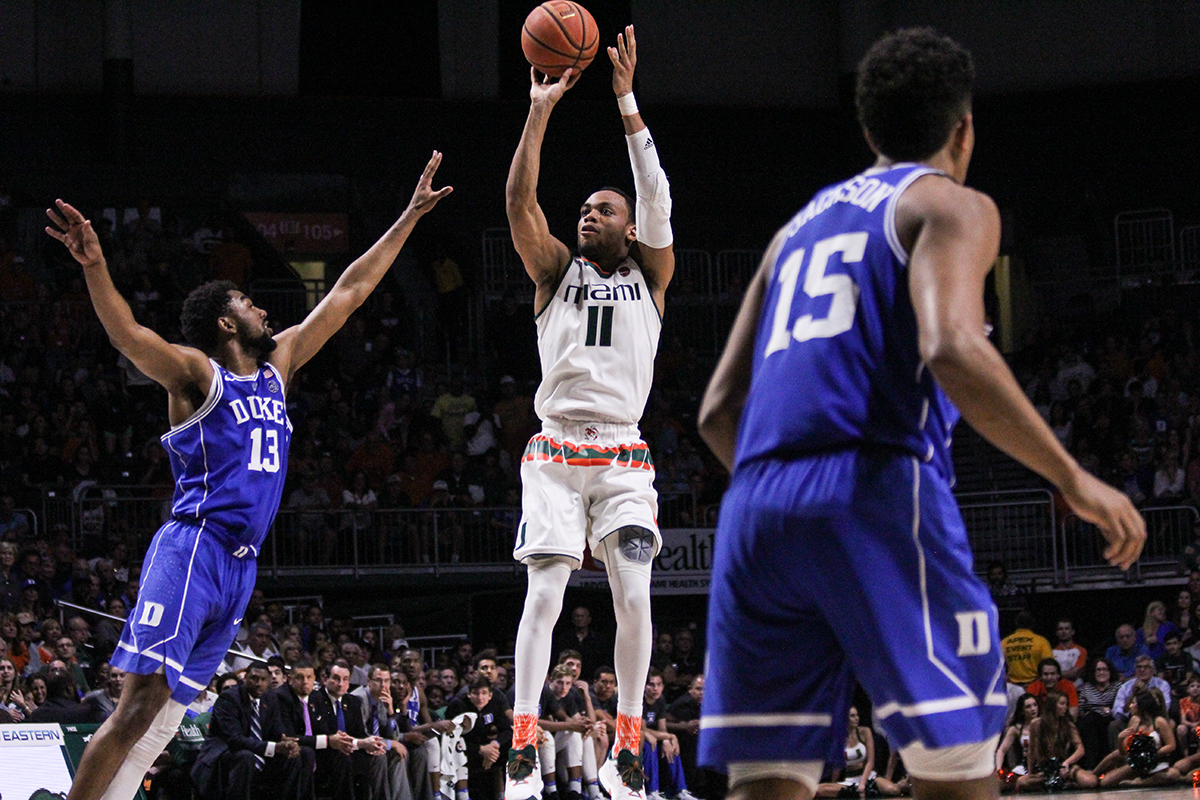 A sea of University of Miami students wearing orange and green rushed down the steps of the Watsco Center, cheering their way towards the “U” in the center of the hardwood court. The fans jumped and pumped their fists in exhilaration as they surrounded the Hurricane athletes that had just pulled off an upset against one of their biggest rivals.

The Canes had just defeated the No. 10 Duke Blue Devils in the only way that seemed appropriate in UM’s home finale – dramatic fashion.

Miami found themselves in a tie game with just under five minutes left to play after leading by as many as 10. Then, appropriately on Senior Day, senior captain Davon Reed caught a pass on his way to the basket to finish an and-one layup to reignite the team.

From that point, the Hurricanes would force the Blue Devils to miss nine of their final 11 shots and made key free-throws down the stretch to pull out the 55-50 win on Saturday afternoon.

“I’m at a loss for words – whatever it took [to win], everyone did their part,” Reed said. “A chance to climb in the ACC poll and a chance to build our confidence is always great. For me personally, to go out on senior day and win was special.”

Although all eyes were on the seniors prior to the game, it was freshman Bruce Brown who drew all the attention and fueled his team from the opening tip off. Brown scored UM’s first seven points on his way to a team-high 25 and the slam dunk that sealed the victory for Miami with five seconds left.

“I’ve been playing in big time games my whole life,” Brown said. “I don’t think it affects my play because I approach the game the same way every time. Growing up, my dad and I used to watch Duke all the time. I just wanted to play well and help my team win.”

He did just that and continued his excellent play against some of the nation’s best competition. Arguably Brown’s most notable moment of the season prior to this matchup was his 30-point performance in a win against North Carolina in January.

“He doesn’t get caught up in the hype – that’s why he plays so well in these games,” Miami Coach Jim Larrañaga said. “What he is all about is doing the best he can do on and off the court. He smiles, and he is happy – that is what his team loves about him.”

“The way the game evolved, it lent itself to physicality, and we didn’t get the shots we normally get,” Duke Coach Mike Krzyzewski said.

Reed, a normally efficient scorer, struggled from the field shooting just 3–11 for nine points, but was effective in another area by pulling down a game-high 10 rebounds. Fellow senior captain Kamari Murphy added seven points and six boards.

Duke guard Luke Kennard, who leads the Blue Devils in scoring and is ranked second in the ACC in points-per-game, tied a team-high with 16 points in the losing effort. Freshman Frank Jackson came off the bench to also score 16. Duke played without starting shooting-guard Grayson Allen due to an ankle injury.

Larrañaga leads the Canes to their fifth 20-win season in his six years coaching at Miami.

“We have had growing pains and adversity, but we have found a way to play at a high level,” Larrañaga said.

Reed and Murphy were both honored for their contributions to the university prior to the start of the contest. They were accompanied by their parents as they were awarded with commemoratory plaques.

“There is a great appreciation for the opportunity they have had here,” Larrañaga said. “I would say the players here at Miami are very grateful, and I think Davon and Kamari are shining examples of that.”

Both Reed and Murphy fittingly went to the free-throw line in the final, pivotal moments, and the crowd reacted with applause.

Junior guard Ja’Quan Newton came off the bench after serving a three-game suspension.

Miami has now won six of its last seven matchups and two consecutive games against ranked opponents. With this signature victory, UM has all but secured its chances to claim a seed in the NCAA Tournament.

Up next for the Hurricanes, the offensively-efficient Virginia Tech Hokies. Tip off is set for 9 p.m. on Monday in Blacksburg, Virginia.

“If you remember earlier, we had games on the other side of the stick,” Reed said when asked about Miami winning back-to-back close games. “We knew the talent that we had [from the beginning of the season]. We just had to find a rhythm. We were just a young team trying to find ourselves. To be able to pull out some close victories just builds our confidence.”