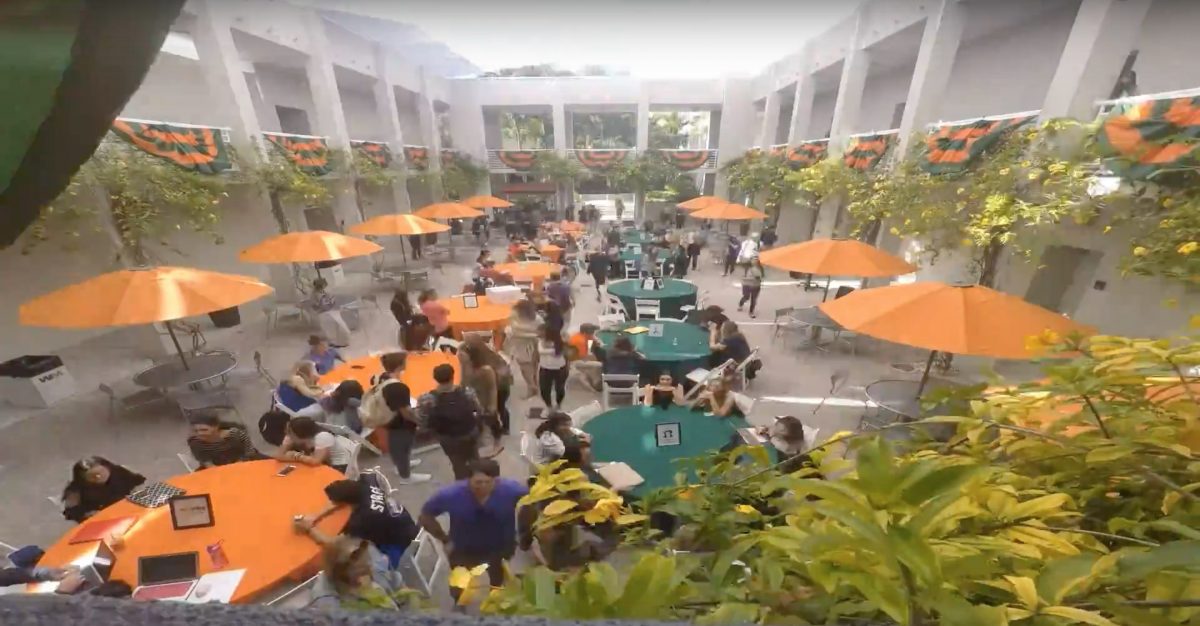 It was 9 a.m., the group handling non-profit organization Big Blue & You were two hours away from presenting 25 hours worth of work for the eighth annual PhilADthropy over the weekend. As the other 11 groups were wrapping up their projects, those handling Big Blue & You’s campaign started having, what they called, “a mental breakdown.”

120 students took part in one of the largest events at the School of Communication (SoC) that replicates the environment of a high pressure advertising industry. A field that could force employees to pull all-nighters to complete work. Students spend their time bringing the advertising and marketing ideas of non-profit organizations throughout the South Florida region. The event aimed to help non-profits that would otherwise be unable to hire an ad agency because of financial restrictions.

There was a power outage in the entire Communication International Building located inside SoC, which shut down all the computers and caused many participants to potentially lose hours of creative designs, posters, brochures and an entire media kit.

“It was crunch time when we were trying to get all our work done, then the power goes out,” Todd Heino, one of the group members of Big Blue & You, said. “It was 15 minutes of terror. It was a stressful time.”

There were only four groups affected by the outage, with the other eight working in classrooms of the Wolfson Building located in SoC.

Other members of Big Blue & You said that they started praying to gods they didn’t believe in and everyone was “collectively losing it,” but they breathed a sigh of relief when the power came back on shortly after. They found that some of the files were saved on Google Docs. The only thing the group lost was time.

Alexandrea Van Deusen, the team leader of the group, said there was a moment of panic, yet they finished everything before the 11 a.m. deadline on Saturday where all the groups had to reconvene at Shoma Hall.

“We didn’t move, we just stayed silent and stared in disbelief. It was 9 a.m. and I just cannot believe it. I had to leave the room,” Van Deusen said. “It came down to the wire but we made it.”

All the groups had to be ready to present to their clients to show the advertising materials and media kits they came up with in during the 25-hour marathon.

Though the event was geared toward students in the SoC, there were students from other schools participating, too.

Jessica Gales, an economics major who was helping the non-profit organization SSJ Heath Foundation, assisted with design and data checking. She said she wanted to see what the ad industry was like. Though the SoC provided a little cheat: free and unlimited amounts of caffeine and Red Bull.

“I definitely think it was a great experience. Came into it not knowing anything,” Gales said. “It was so fun, so rewarding at the end. Staying up was hard but I really enjoyed it.”

Van Deusen was used to the fast-pace long hours; she has participated in PhilADthropy five times, three times as a student and twice as a team leader post-graduation. She said the event was a valuable learning experience for students.

“It simulates the real world, the fast-pressure and real world experience. And then showing our campaign to a client,” Van Deusen said. “PhilADthropy is a really rewarding 25 hours.”

Van Deusen now works for SoBe Promos, a promotional product company, as a graphic designer and said her experiences in PhilADthropy as a student helped her get her job.

“I used posters and brochures that we made for job applications. The fact we can do a whole campaign in 25 hours is always great material,” she said.

Laura Johnson, the youth programs manager for Big Blue & You, said the group’s presentation of all the designs they created for the her organization were great. She said her organization would use a lot of the student-produced materials — such as video, design, social media planner and revised handbook — for future events.

“It felt like a big weight has been lifted from my shoulders,” Johnson said. “We know the potential that our organization had but felt we were missing something that could take us further, and this was all great stuff.”

The student’s 25-hour marathon ended with dark eye bags, smelling of stale coffee and cold sweat but with a smile of satisfaction.

“We helped these foundations and it feels good,” Gales said. “But, right now, I think I need a shower.”

The Toby Center for Family Transition

Voices for Children of Broward County

Women’s Cancer Association of the University of Miami, and Women of Tomorrow