Jeremy Penn remembers spending his freshman year High Holy Days, a three-day celebration for the Jewish community, in the still unrenovated Hillel building. He remembers being skeptical about joining the organization as he traversed the old-fashioned, checkered floorboards and awkward layout.

Four years later, dressed up for his senior photos, Penn can recount all the ways Hillel, an international foundation for Jewish campus life, has impacted his time at UM.

“I was born and raised Jewish. It’s a part of my identity. The same way someone has a gender or a race, I am Jewish,” Penn said.

Penn will be graduating this spring, on the eve of UM Hillel’s own milestone — its 75th year on campus. Over the last four years, the center has undergone some of its biggest changes.

The Braman and Miller families, prominent donors and board members of the university, donated $5.5 million to the renovate the old Hillel building in 2014. Anticipation for the new building grew, but until its reopening in December 2015, the students were left without a place to meet.

“We were the ‘wandering jews’ for a year and a half,” Penn said. “At first, I was really worried. I just didn’t know how it was going to work without a building.”

Students banded together in response, creating a student chapter of Hillel in order to access the I-Lounge in the University Center.

“It didn’t matter what we were doing throughout the week, we knew we would see each other Friday night, be there for each other, kiss each other on the cheek, and sit down and do our prayer service together, and then have dinner as a family,” said Penn.

“We have been providing a opportunity for Jewish students to be given a home,” said Igor Khokhlov, executive director of UM Hillel. Khokhlov has worked for the foundation since 2002 and recently became executive director of UM’s branch in 2015. “Countless numbers of students and their families chose the University of Miami in part because they knew there was a very strong Jewish community here.”

According to the UM Factbook 2016-2017, an estimated 15 percent of the university’s population is Jewish.

The High Holy Days, which includes Rosh Hashanah and Yom Kippur, were held for the first time in the new center starting October 2016. Celebration of the High Holy Days include long and formal prayer services and for Rosh Hashanah, a nighttime dinner to celebrate the Jewish New Year.

“I probably spent more time in the Hillel building that week than I did in my own room,” Penn said. “I told myself I was making these three days about me and my religion. So they were a really powerful experience this year.”

Penn is already anticipating his final Passover in April. As for his hopes for Hillel’s future once he graduates, he has yet to say.

“I’ve been able to hang out with all the friends I’ve made in Hillel the past three years in a way that is not different than before but in a more ‘oh this is my last’ first shabbat of the year, this is my last Rosh Hashanah, this is my last this,” Penn said. “It has sort of come full circle. We’re in a new building but it’s the same building, we’re all new people but we’re still the same person.”

Correction, Jan. 30, 2017: This story previously stated the Braman and Miller families donated $6.2 million in 2014 for the renovation of the Hillel building. This number is incorrect. The families donated $5.5 million.

“According to the UM Factbook 2016-2017, an estimated 15 percent of the university’s population is Jewish.” This statement was updated to better reflect the estimated number of Jewish students on campus. 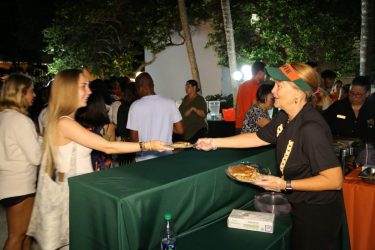