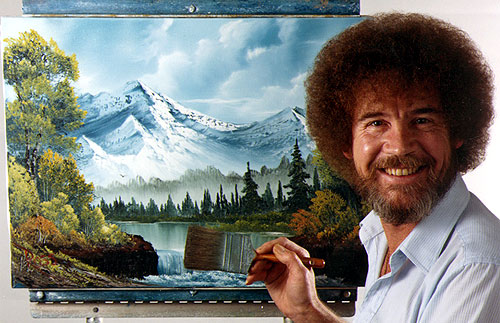 Baby boomers love nothing more than to try to understand our generation, consistently degrading our affiliation with “the Facebook” and “the Twitter.” Which I love because, when you mention that their generation smoked cigarettes and legally drank at age 18, somehow it was okay because “it was a different time back then.” I don’t know about you, but I’ll take a newsfeed of puppy videos over a lung that looks like the black aliens in “Suicide Squad.”

But if there’s one millennial code our predecessors can’t seem to crack, it’s the sudden resurgence of the Picasso of Public Television, Bob Ross. This may be an enigma to the older folk, but his rise to Internet stardom makes total sense to me.

In case you haven’t had a chance to peruse his late-1980s catalogue from “The Joy of Painting,” on Netflix, this former Air Force Sergeant clearly gathered a lot of “nice, winter scenes” (as he often whispered into the camera) from the sky that he perfectly illustrated in each half hour episode. In other words, Mr. Rogers and Mrs. Doubtfire had a son, and he was raised by small, woodland creatures who taught him how to both paint any sunset and come up with weirdly soothing personifications of nature – such as “happy little trees” and “lazy” water.

Now, for some reason, the generation that is pegged for needing constant action in superhero films has no problem just plopping down after a long day and letting Bob Ross lull them to sleep with a two-inch paintbrush. So, how is this possible?

Well, it’s because everyone who tries to label millennials hasn’t realized that this age group has not changed at all. At the end of the day, it will always – always – come down to authenticity.

Every decade, our demographic is sick and tired of older politicians lying to us and telling us what we need, and we just want someone to keep it real – but without saying that phrase in air-quotes. There’s a reason Senator Bernie Sanders, who has been preaching the same environmental changes for over 40 years, performed so well with college students.

And, fortunately for us, Bob Ross was exactly that. He was just a dude with a huge afro who loved to paint. That’s all he did. And the show may just be him standing at an easel clutching a palette full of “Titanium Wa-hite,” but he enjoyed every second of it – which is contagious for the viewer. It is pure happiness, like a puppy on your newsfeed. Clearly, much more believable than Donald Trump saying, “I love Hispanics!” on Cinco de Mayo, or Hillary Clinton doing the “Macarena” at the 1996 Democratic Convention.

So, if you’re trying to connect with young people, just remember to be yourself. It makes you appear much more confident and likable, and it’s kind of what you have the most experience doing anyway.

And, soon enough, you’ll be a “happy little tree.” Ugh, it sounds so creepy unless he says it.