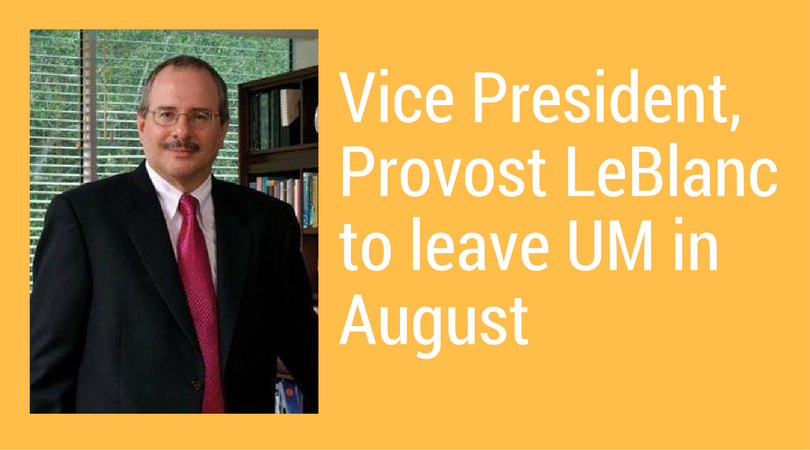 Executive Vice President and Provost Thomas J. LeBlanc will leave the University of Miami to become president of George Washington University, starting Aug. 1. The announcement was made in a message from UM President Julio Frenk.

“Tom has been a great partner and friend throughout my presidency, starting from his service as interim president prior to my arrival. Although we will miss him, we are very proud of this new recognition of his accomplished career,” said Frenk in an e-Veritas newsletter.

President Frenk will work with the Faculty Senate and the Board of Trustees to form a search committee to find LeBlanc’s successor.

Since his appointment in 2005, LeBlanc served as the chief academic officer and chief budget officer for UM. He oversaw and coordinated academic programs, research administration and funding, student affairs, admissions, and expenditures throughout UM’s 11 schools and colleges. LeBlanc also played a role in mapping out President Frenk’s “Roadmap to Our New Century” initiative.

During his tenure, UM witnessed new building projects at the Coral Gables campus, the Miller School of Medicine and the Rosenstiel School of Marine and Atmospheric Science. LeBlanc was fundamental in the founding of new institutes and centers at UM, such as the Center for Computational Science and the Office of Civic and Community Engagement.

At the same time, LeBlanc, who holds a Ph.D in computer science from from the University of Wisconsin–Madison, was a professor in the departments of computer science, electrical and computer engineering.

“The University of Miami has given me so much more than I could ever hope to repay, through the professional opportunities and close friendships developed over the past 12 years. My wife and I have grown to love the university, the city of Miami, and the wonderful people of South Florida,” said LeBlanc in the e-Veritas newsletter. “As we look forward with excitement to the tremendous opportunity at George Washington University, we will leave with many fond memories, warm friendships, and pride in the progress that we have all forged together. Go ‘Canes!”