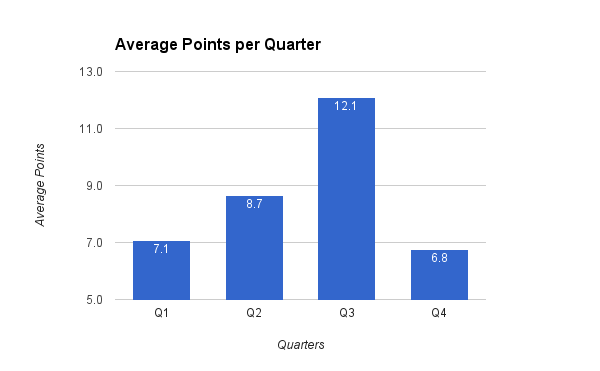 As the Miami Hurricanes prepare to battle No. 16 West Virginia in the Russell Athletic Bowl in Orlando, let’s crunch some numbers to see how the Canes performed throughout the season.

Miami (8-4, 5-3) had a sandwich season with four losses stuffed between a set of four wins. Looking at the scores throughout each game, there is one pattern that stands out the most: if the team was losing going into the fourth quarter, it just could never crawl back. That fourth quarter tradition, where the Canes roar to life to seal a game or make a dramatic comeback, just didn’t happen this season. Even when Miami did score, the fourth quarter proved to be the team’s lowest scoring quarter on average. It would reach a crescendo by the third, but then fall off, scoring-wise. The Hurricanes’ scoring potential also fell during the four-game losing streak. Throughout the season, junior quarterback Brad Kaaya took 24 sacks. However, 75 percent of those sacks occurred during the losing streak, with Virginia Tech handing Miami a hefty eight on its own (the most in one game this season). With 16 wins, Miami leads its 19-game history with West Virginia. The last time the Mountaineers beat the Hurricanes was in 1997, and the Canes have held a six-game win streak ever since. However, the Mountaineers (10-2, 6-2) are coming off a hot season and may give the Hurricanes a run for their money at 5:30 p.m. on Wednesday in Camping World Stadium.