Nancy Clasby, a leading professor at the University of Miami who developed the university’s first black studies course, died in her sleep on Nov. 4 at the age of 78. Since her death, her husband, English professor Eugene Clasby, was approached by those who remembered Nancy Clasby as the first person they met in Miami. Those and many others she impacted throughout her life could sum up their encounter with her in one word: engaging.

In an interview with The Miami Hurricane, Eugene Clasby shared stories of former students’ time with her, recounting that when she spoke to them, they knew she gave them her undivided attention.

“That’s what she specialized in: making people happy,” he said.

Her career as a professor, spanning 54 years, left behind a legacy that has forever changed the nature of UM’s curriculum.

She worked to create the first black studies program and taught the first black literature courses. From then on, the school would begin to offer other black studies courses. As one of the few female professors on campus in the 1960s, Nancy Clasby also worked to help unionize the faculty. Though her efforts to do so failed, according to her husband, it helped open the faculty to improve disability plans.

“She was strong and kind and good,” her husband said. “And that’s one hell of a combination.”

At the time, UM had only recently started racially integrating the school. The United Black Students organization had just formed in 1967, and there was a growing demand from these students to open courses that focused on African-American studies.

A scholar by heart,  Nancy Clasby knew there was a trove of black literature that was being neglected by the university curriculum.

In his wife’s Christian beliefs, Eugene Clasby said it was important to stand for those who could not stand on their own and to help them find their voice. He described her as having a “passion for justice.”

“Nancy said, ‘Wait a minute, why aren’t we teaching this stuff?’” he said. “One thing she was really good at was organizing people. She was the organizer of this whole thing, the spirit of making the minor of black literature.”

Her strength was one of the first things Eugene Clasby said he noticed about her when they met through mutual friends.

Nancy Clasby worked to make the world a better place on a large scale and on a personal level. She participated in protests, volunteered and fought for racial equality throughout her life.

“Always seek what is true, what is just,” said Eugene Clasby of his wife’s standing legacy. “Don’t be satisfied with what is hatred and anger and all those things that distract us as human beings.”

Correction, Nov. 28, 2016: An earlier version of this story referred to Nancy Clasby and her husband, Eugene Clasby, by their first names. The story has been corrected with their full names to reflect style guidelines. 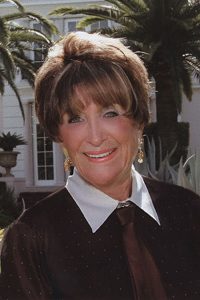