In the study room of Hecht McDonald Tower 6, residents on the floor and from MT 7 gather to watch the CNN live broadcast of the results. Freshman Calvin Chappell (left, white shirt with red cuffs) decided to invite friends and floormates for dinner and an election watch party. Students from Florida, New York, New Jersey, Maryland, Pennsylvania, Wisconsin, and Brazil ordered Chipotle and discussed the odds as results continued to roll out during the evening. Jackie Yang // Managing Editor.

The atmosphere in the study room on the sixth floor of Hecht McDonald Tower was initially relaxed and somewhat festive, resembling a group of friends gathered around for a sporting event or holiday. Around 15 students sat around a television in the corner that was broadcasting the CNN live coverage of election poll results.

Students were in a positive mood about the passing of Amendment 2 and the failure of Amendment 1. The group, which was mostly composed of students from the East Coast with liberal views, was still entertaining ideas about the possibility of a Trump presidency at around 9 p.m.

“I feel nervous,” said freshman political science major Calvin Chappell, who threw together the event when he realized many people on his floor were interested in watching election results. “Nervous but confident. I’m a little bit surprised about Florida, but besides that I’m not surprised.”

Others were frustrated by how close the race was becoming. “It’s really bad,” said Julia Lynch, a student from Pennsylvania but re-registered to vote for the first time in Miami-Dade county. “Just the fact that this is what it comes down to. A lot of my friends at home definitely voted for Hillary Clinton. I know the suburbs are for Clinton, but I can’t speak about the rural areas. We have this group chat with my friends from back home, and they are flipping out.”

At this time, Pennsylvania had not yet been called. As of the time of publication, Pennsylvania was won by Republican nominee Donald Trump at 48.7 percent, with 98 percent of precincts reporting.

However, even though students could see that the number of reporting precincts was slowly rising and that Trump was gaining more key states, there was still a sense of impossibility surrounding a Trump presidency.

When asked how they felt about the idea of waking up the next morning to Trump being announced as the next president, “sick,” “scared,” and “stressed” were just a few of the responses from the viewers.

“I feel like this is whoever we hate less,” freshman Rachel McMullen said about her first election. “It’s like a joke.” “It’s closer than it should be,” admitted Chappell as more key states like Florida seemed to lock in their results.

Florida, which at times during the evening was predicted to go to Democratic nominee Hillary Clinton, had turned red as more precincts reported results.

Student Bobby Geroulanos was frustrated by the wait on the remaining Florida precincts.

“It still hasn’t moved from 91 percent,” he groaned. “It’s literally that last 9 percent that could determine Florida.”

As states like North Carolina, Wisconsin, Pennsylvania, Ohio and Michigan reported more votes for Trump, the students expressed a growing sense of disbelief as they watched the updates. Within a half hour, the electoral vote advantage had flipped to Trump’s favor according to CNN’s broadcast.

Brazilian student Gabriel Soligo, observing his peers, said that their interest in politics was different than what he was used to in his home country.

“I think that it’s something that people are really into,” Soligo said. “I think it’s funny how it’s like specifically Hillary and Trump instead of how to improve the country. I don’t know if it’s always like this; I like watching the environment, it’s cool. I don’t know how it would change anything for me, since I don’t have any family roots in American politics.”

Meanwhile, his peers were growing more anxious. Similar to many liberal Floridian voters, Chappell was also exasperated with his home state.

“Shoutout to Wisconsin,”  he remarked sarcastically as more results rolled in from the state that has not been won by a Republican presidential candidate since 1984.

As the night progressed, Trump solidified his lead ahead of Clinton, pulling ahead in both Pennsylvania and Michigan. Only one call needed to be made to formally secure the 270 votes Trump needed to formally be declared as president-elect. When The Miami Hurricane checked back in with those students in McDonald tower early Wednesday morning, reactions included those of shock, disappointment, disgust, fear and isolation.

“I feel afraid for my rights,” was Chappell’s last comment of the night.

At 2:40 a.m., CNN reported that Clinton had called Trump to concede the race. 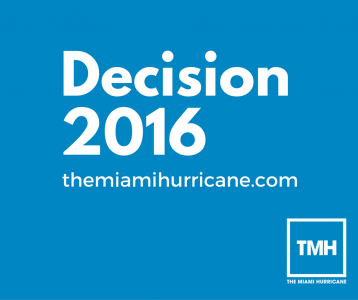 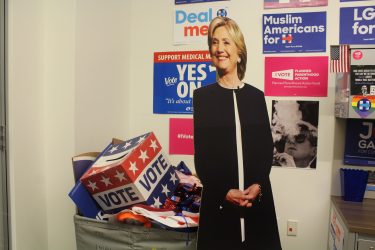 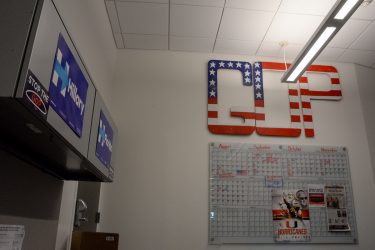