There is so much riding on this year’s election – a point that has been heavily emphasized by the candidates and news media. Considering the narrowing gap between the candidates, especially in Florida, it can be frustrating to see some students who are eligible to vote refuse to exercise their right.

When it’s time to head to the polls, those who are passionate about voting may feel compelled to encourage others to do the same – but just as Americans have the right to vote, they also have the freedom to decide not to. So how do we emphasize the importance of participating in the cornerstone of democracy without imposing on the individual freedoms this country was founded on? The key is to remain informative and understanding rather than condescending and pushy. Simply asking why an individual isn’t voting without judgment can lead to a productive discussion.

Often, individuals choose not to vote due to disinterest. However, for some Americans, not voting is a thoughtful decision resulting from deeply-rooted personal values ranging from wanting to avoid being part of the partisan biases that divide friends, families and communities to believing that each major candidate will take the country in a negative direction.

Many cite a lack of support for either of the candidates, feeling that this election is very much about choosing a “lesser of two evils.” Democratic nominee Hillary Clinton currently has a 55.3 percent unfavorable rate, while Republican nominee Donald Trump falls at around 57.8 percent, according to polling site RealClearPolitics. Clinton is viewed as a corrupt politician, and Trump is viewed as an inexperienced bully.

However, regardless of how much students dislike both candidates, there are real, tangible differences in the policies they and their parties will enact. Neither of the candidates have a pristine character, but Americans should vote for the one they believe will create more effective, positive change – or at least create less negative impact on the lives of Americans.

Others may not feel like their votes count. America is not a direct democracy, and instead of casting votes for the presidency, we are actually casting votes for 538 members of the Electoral College who each pledge to vote for a certain party. Nearly all states and Washington D.C., excluding Maine and Nebraska, have an “all-or-nothing” policy when it comes to winning electoral votes. As a result, votes in swing states count more than votes in safely red or blue states, like Texas or California.

Those who are registered in swing states such as Florida should be aware of the additional power that they have as voters – their vote really does count. However, even those registered in “safe” states do have power. They have votes that will count toward local governments, school boards and state legislatures. Their votes will decide on important policies regarding infrastructure, education, healthcare, job growth, civil rights and other policies in their home state. Local elections impact people’s lives just as much as, if not more, than presidential elections.

Others may not vote because of inconvenience, as well as lack of information about the issues. Of course, the United States could still make voting an easier process; Election Day is not a federal holiday, and eligible voters are not automatically registered on their 18th birthday

Even with the obstacles involved in voting, there are so many resources and initiatives that can help get out the vote.

Students may feel they have no time between classes, commitments and schoolwork. However, early voting has been available for two weeks, and polling places on election day are located conveniently on or near campus at the Wastco Center and St. Augustine’s Catholic Church across San Amaro.

Voting can appear to be a more complicated process than it needs to be, and students will need to take at least some initiative to empower and educate themselves. Luckily, we live in the Information Age, and the internet is saturated with resources about the voting process and the issues themselves. Simply reading news media is already a way of doing that.

The bottom line is that having the right to vote is powerful, and choosing to not go to the polls out of apathy, idealism or personal inconvenience is a privilege. It is a privilege for some to know that no matter the outcome of Tuesday’s election, life will remain relatively undisturbed. However, others are not as lucky. These votes will deeply affect the lives of millions of workers, patients, beneficiaries of Medicare and Medicaid, and soldiers, as well as small businesses, undocumented “dreamers,” classrooms, ecosystems and much more. Those who do sit out on this election must remember that. 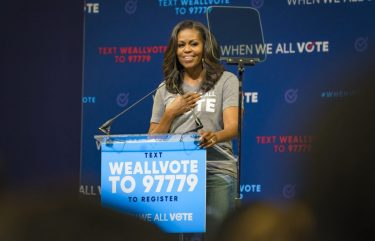