DJ Marshmello dances during his set at the Homecoming Concert Thursday night in the Watsco Center. Victoria McKaba // Photo Editor

Psychedelic graphics lit up the screen at the Wastco Center as thousands of students raved to Marshmello, who headlined this year’s Homecoming Concert. The masked dance music D. J. played his remixes of top hits like Fetty Wap’s “Trap Queen,” Justin Bieber’s “Where Are Ü Now,” The Chainsmokers’ “Don’t Let Me Down” and The White Stripes’ “Seven Nation Army,” a football-season anthem.

Despite a low-energy opening by hip-hop artist D. R. A. M., the crowd would soon be back on its feet when the D. J. took the turntable in his trademark white getup and light-up marshmallow helmet.

“It was lit,” said senior Shivani Hanchate after the concert. “But not D.R.A.M.”

Students admitted that they had higher expectations for D.R.A.M., who opened for Marshmello after student D.J. group Yardhaus with several slower hip-hop numbers, including a sensual love song called “Outta Sight” from his new album “Big Baby D.R.A.M.”

“He could’ve been better,” freshman Tyran Triplett said. “He could’ve actually rapped instead of just singing.”

D.R.A.M. also made several sexual comments to the crowd, commenting that “I’m going to be sad letting you guys go home knowing half of you won’t be getting any p*ssy.”

His biggest hit with the crowd was “Broccoli,” which peaked at No. 5 on the Billboard Hot 100, where it has been charted for the past 19 weeks.

Marshmello also played a remix of the single later on in the evening.

Many students were excited to see the headlining D. J., who has performed at big-name festivals like Electric Daisy Carnival, Ultra and Lollapalooza. Marshmello’s identity under the mask is believed to be American D.J. Chris Comstock, also known as Dotcom.

“I heard he was really good at Ultra, and I’m really excited to see him live,” junior Shadi Gowhari said. “He’s really … mellow, that’s his vibe. I’m usually more into the upbeat stuff but we got really lucky. He’s sold out for four nights in my hometown in LA.”

Even those who were just discovering Marshmello expected a great experience.

“I had honestly never heard of him before,” freshman Grant Fee said. “I checked out some concert footage online and it looks like it’ll be fun.”

Between the mosh pits, the giant inflatables and glowsticks, the Wastco Center turned into a mini-EDM festival. Students on the floor vaped and snuck alcohol in hydration backpacks. On the digital screen flashed bright images of everything from s’mores (with the phrase “Just Say No” emblazoned over the screen) and Marshmello riding a unicorn. It was trippy, quirky and went along perfectly with Marshmello’s fun synths and heart-thudding bass drops. With some creative mixing, Marshmello got the packed crowd to rage to even the likes of Adele’s “Hello.”

At the end of the concert, Marshmello also played his own song, “Alone,” and gave a nod to “Ritual,” his new single that dropped on Oct. 27.

Students walked out of the Wastco Center in a different state of mind.

“Marshmello – insane,” was sophomore Megan Berger’s reaction.  “I really liked ‘Hello’ at the end. It was really fun.”

Some were almost left speechless by the performance.

Marshmello returns to Miami on Dec. 31 to perform at Story Nightclub. The student D.J. group Yardhaus can be found on Facebook for future events. 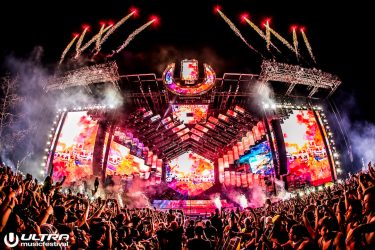 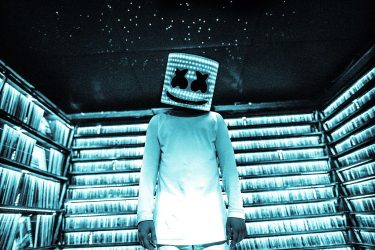