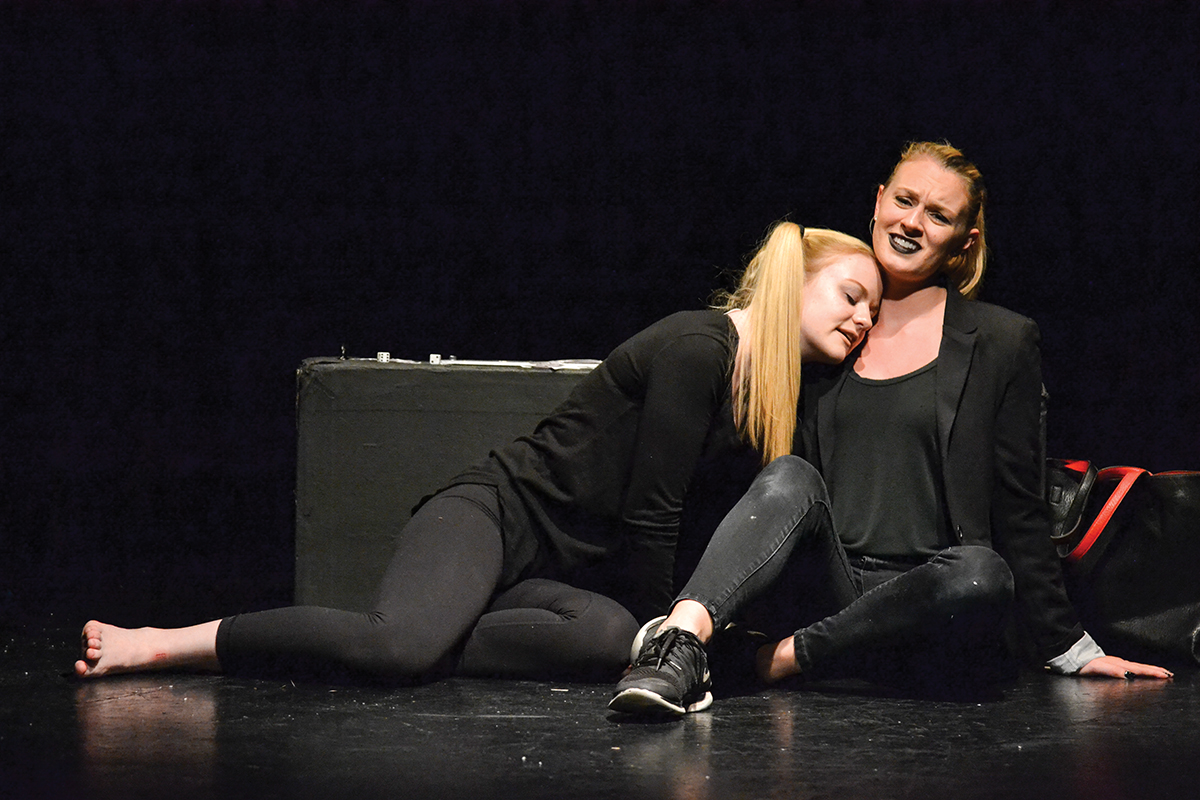 Thirteen is tough age, even for a normal kid. Your hormones are raging, your family is constantly annoying you and your growing body is hungry all the time. But when you’re a pubescent vampire confined to an attic, being 13 absolutely bites (literally). In “Cuddles,” which ran last weekend in the Hecht Studio Theatre, young Eve and her human older sister Tabby navigate the perils of growing up and growing apart, until a dark secret changes their relationship forever.

“Cuddles” is a 2011 horror play from up-and-coming British writer Joseph Wilde. The play toured the U.K. before transferring to New York in 2015, to great critical acclaim. This year, the film rights to the script were optioned by Nicole Kidman’s Blossom Films for an on-screen adaptation. The compact Hecht Studio Theatre allowed UM’s stage production to feel almost as intimate as a film, with the two characters frequently lit in such small pools of light as to appear like a close-up.

Director Bruce Miller brought a pair of powerhouse performances out of senior BFA Musical Theatre majors Annabelle Shea and Hollis Williams. The tense atmosphere necessary for “Cuddles” to function as a thriller demanded a lot from its cast. With only two actors and multiple sequences of long, interwoven monologues, there was no room for Shea or Williams to lose focus for even a moment, and they both flourished under the pressure. Both women built complex and compelling arcs for their characters. Shea’s Eve seemed to grow up before the audience’s eyes: sometimes the innocent, frightened child; at others, a fierce, manipulative monster. As Tabby, Williams was a commanding presence, yet she didn’t lose the inherent neuroses of this troubled young woman. Despite the bleak themes of the play, both characters were immensely likable in their struggles.

Near the end of the play, a huge twist is revealed that transforms everything for Eve and Tabby. No spoilers here, but suffice it to say that “Cuddles” takes an even darker turn that raises far more questions than it answers. This revelation, while certainly unexpected, feels more like a cheap grab for shock value by the playwright than a genuinely well-crafted reversal. This is no fault of the production; the twist is skillfully handled and completely believable on-stage. The writing simply robs “Cuddles” of a more sophisticated message than mere horror; a missed opportunity for an otherwise creative, boundary-pushing script.

While the close quarters of a black-box theatre certainly increased the creepiness of the show, the production occasionally suffered a bit from this minimalism. Some transitions between scenes could have been crisper, and the lights, while effective at setting the mood, sometimes left the actors in too much shadow to clearly see their facial expressions. On the whole, however, “Cuddles” benefited from the small space more than it suffered.

If the mark of a worthwhile play is the amount of conversation and debate it generates among its audience, then this show hit the ball out of the park. “Cuddles” is a haunting play you won’t soon forget.