The Hurricanes volleyball team fell to the Pittsburgh Panthers 3-1 on Friday night despite a career performance from sophomore outside hitter Kolby Bird. Bird finished with career highs in kills (11) and hit percentage (.450).

Despite the lopsided score, the game was heavily competitive throughout. Miami (7-12, 1-6 ACC) jumped out to an early lead in the first set, anchored by three quick kills from Bird.

“The past two weeks I’ve been working on hitting shots down the line, and this was really the first game I put it into play, and it paid off,” Bird said after the game.

As the first set drew to a close, the Canes had a costly passing error that allowed the Panthers (14-5, 5-2 ACC) to take the lead and quickly nab the set 26-24.

The second set was another close one for the two teams. While the Hurricanes endured five service errors in the set, the team made up for it with an impressive six blocks as well as five kills from junior captain outside hitter Olga Strantzali. Miami took the set 25-22.

“In the last two or three games we’ve been constantly getting better, and it showed here today even with the loss,” Strantzali said.

Pittsburgh was able to pull away in both the third and fourth sets to win 25-22 and 25-18, respectively, which clinched the match. Panthers middle blocker Jenna Potts, who is currently ranked No. 31 in the nation in blocks, provided stout defense that the Canes were unable to defeat. Potts finished with eight blocks and seven kills, the majority of which came in the last two sets.

The silver lining of the day for the team may have come from seeing All-ACC setter Haley Templeton on the sideline without a walking boot, likely meaning a return to action sooner rather than later.

“She’s doing a good job on the recovery trail and she’s been a great teammate throughout this process,” Gándara said. “We’ll have to see when exactly [Templeton] gets back, but the most important thing is that she gets healthy.”

The Hurricanes are in action again against Virginia Tech at 1 p.m. on Sunday in the Knight Sports Complex. 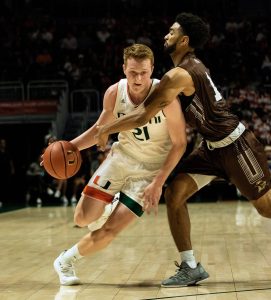