Throughout this election we have heard that we are faced with two imperfect choices, that we are seeking the “lesser of two evils.” For the first time since 1996, a third party candidate has been expected to garner a significant portion of the popular vote.

That candidate was supposed to be Libertarian candidate Governor Gary Johnson.

I once considered voting for Governor Johnson for president because he represented a “third way” of fiscal conservatism and social inclusivity. As the Republican governor over a Democratic-majority legislature in New Mexico, he demonstrated a strong record of fiscal responsibility, vetoing nearly 750 bills. He also innovatively supported a “live-and-let-live” attitude to toxic debates on social issues.

In this demoralizing election, it seemed that he would offer the moderation between the protectionism of Trump and the über-liberalism of Hillary Clinton. However, some gaping holes have been revealed that should disqualify him from being commander-in-chief.

Recently, he was unable to name a single foreign leader. In the interview, Chris Matthews even named all of the inhabited continents and major countries throughout the world to help him out.

Even if Governor Johnson could not name a foreign leader because he doesn’t respect or admire any of those he knows, is there any comfort in that? Ronald Reagan admired Margaret Thatcher, a contemporary, foreign head of state. Bill Clinton respected and collaborated with Prime Minister Tony Blair of the United Kingdom, Prime Minister Yitzhak Rabin of Israel and Prime Minister Jean Chrétien of Canada. Every successful leader – in any field for that matter – has emulated a past or contemporary leader, whether they are from his or her own country or from another, especially in the realm of geopolitics.

This was not just an “Aleppo moment” as Johnson said it was, an allusion to when he could not name the city at the epicenter of the Syrian refugee crisis. This moment either reveals Governor Johnson’s ignorance and incompetence, or his inner penchant for isolationism.

A candidate who cannot name a single foreign head of state is not qualified to conduct the diplomatic and military activities required of the presidency. And while Johnson’s running mate, former Governor William Weld of Massachusetts, is an intelligent and distinguished public servant, the person at the top of the ticket matters most.

I may look suspiciously upon “big government,” but there is one thing that I fear even more: incompetent government. In this decisive election, a vote for Gary Johnson is not just a wasted protest vote, it is irresponsible.

Aditya Shah is a junior majoring in microbiology, immunology and economics. 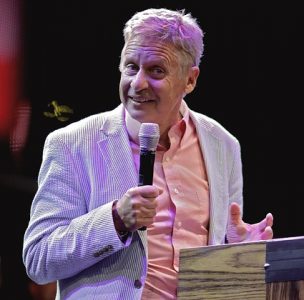