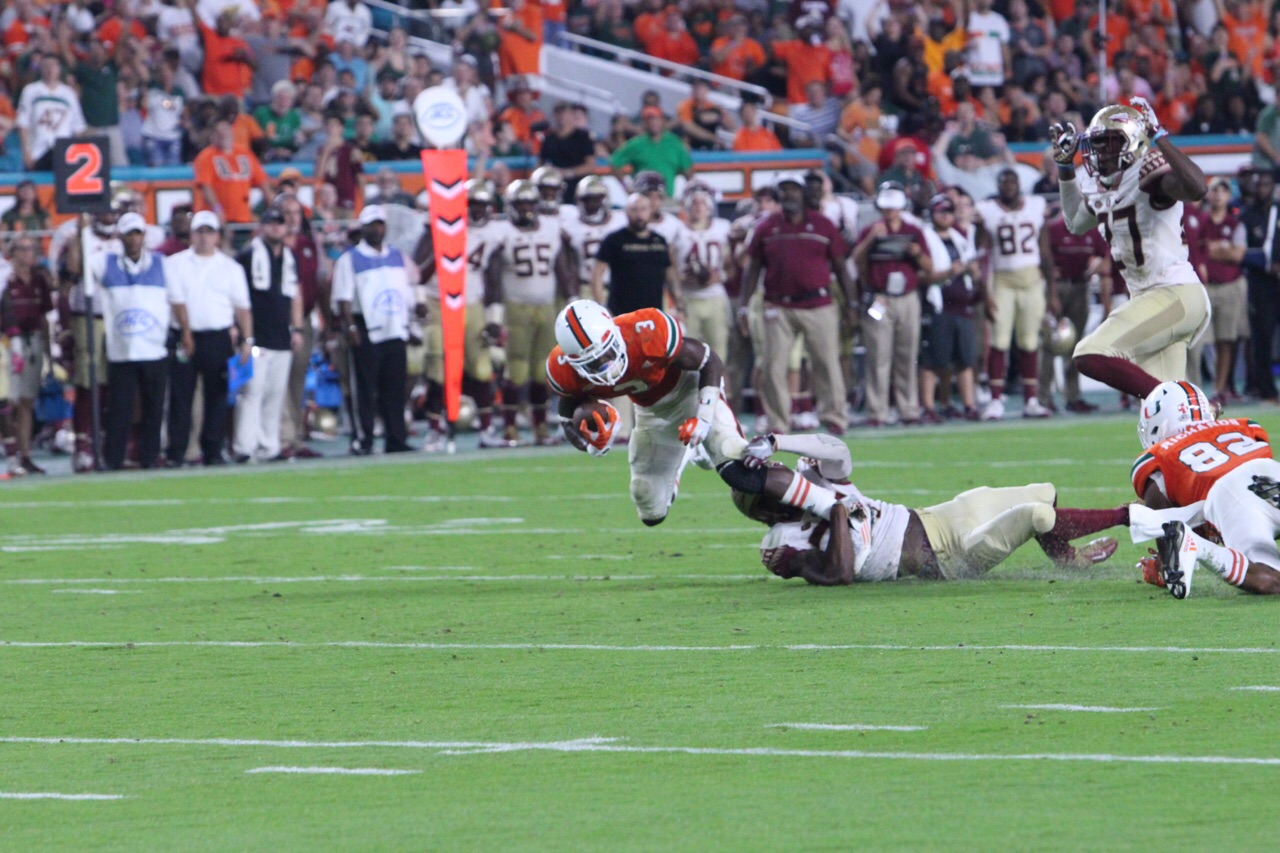 Saturday night was a tough one for Hurricanes players, coaches and fans alike. Senior wide receiver Stacy Coley, who caught what most assumed would be the game-tying touchdown, put it best.

“We lost,” Coley said. “It hurt. We lost by a point. I feel like we could have executed more and gave more effort, but it got blocked.”

This was more than just any other college football game for Miami last night. The team had something to prove, and it came very close to pulling it off, or to at least put itself in position to. There is no guarantee that even if the kick went in that the Canes’ defense would have been able to stop the Seminoles from scoring again in the time remaining, and it is not 100 percent certain that the Canes would have even won in overtime. Still there was a chance, and now fans are left thinking “what if?”

Almost all the players and coaches who got on the podium attested to the same fact. There was an opportunity, but the team did not capitalize. Another common theme that was echoed in the press conferences: the need to move on and focus on getting better for the next matchup.

“When you take an L, you’re going to hurt and you’re going to feel some type of way,” junior defensive lineman Chad Thomas said. “But we have to get on to the next game tomorrow.”

The players are right. They can’t let this one loss derail everything they have worked so hard to achieve this season just because it came to Florida State. They must regroup and move forward. Unfortunately, sometimes in order to move forward, a team has to take a few steps backward and watch film to see what exactly went right and what went wrong.

UM had this game under control going into halftime. The team had a 13-3 lead, all the momentum was on its side and it was playing good, smart football on both ends of the field.

The Canes’ defense, although much more consistent in the first half than the second, did what it needed to do for the most part. There were a few broken coverages that led to big gains, most notably the 59-yard touchdown pass from Seminoles’ quarterback Deondre Francois to star running back Dalvin Cook, but the fact is that UM only allowed FSU to score 20 total points. Florida State is a team that came into the game averaging more than 41 points a game.

“Offensively, just very inconsistent,” Richt said. “We had a couple of bright moments, but just not good enough tonight to win, offensively.”

There were a lot of problems on offense in Saturday night’s game, specifically in that second half. The Seminoles racked up more passing yards and rushing yards than the Hurricanes, while also winning the time of possession battle handily 36:57 to 23:03. FSU was 9-17 on third downs, UM was 4-13. The hurry-up offense that Coach Richt likes to run from time to time has been effective so far this season, but might have hurt Miami in this game.

“If you go with tempo, you’re not going to have as much time of possession,” Richt said. “We’ll always look at that and try to make a determination if we’re putting our guys in a bad way. But right now, that’s how we feel is our best shot of moving the ball well.”

One of the biggest notable issues in the offense was the inconsistency of junior quarterback Brad Kaaya. Kaaya came into the game averaging 360.5 yards versus the Seminoles in his career. He had 214 passing yards in this game, a staggering decline. To make things even weirder, 154 of those yards came in the first half.

His struggles could be attested to his lack of protection. Kaaya is a pocket passer, not the type of player that is at his best throwing on the run. He did not get a lot of time to throw for a large portion of the second half, feeling pressure from the Florida State defense and getting hit a multitude times. Kaaya even got a tooth knocked out on one of the hits.

Kaaya’s biggest mistake, and what some would say changed the momentum of the game, came on an intercepted pass at the 11:18 mark of the third quarter in which he hesitated before throwing a ball to a receiver in the end zone that just wasn’t open.

“I thought Ahmmon [Richards] was going to undercut him on the corner route but he kept it up top,” Kaaya said of the play. “Just a miscommunication. I kind of threw it underneath and the corner turned around and made a play.”

The other problem was Miami’s run game, which had been one of the best in the nation to this point. It was just not there. Running backs Walton and junior Joseph Yearby only combined for 78 yards on 24 carries and no touchdowns. That amounts to 3.25 yards per carry, which just won’t get it done against a team like Florida State. The only game-changing run came on a potential 45-yard touchdown rush by Walton towards the end of the third quarter, but it got called back due to a holding penalty.

If there was any positive on offense for the Canes, it was the play of Coley in his final game against FSU. The senior didn’t just rack up 80 yards on seven catches along with the team’s only two touchdowns, but he played with the kind of heart that one would expect from a top-notch program’s number one wideout in a rivalry game. He fought hard up until the very end, and almost saved the team off of sheer will.

Coley is now ranked No. 7 on the all-time Miami list for receptions with 125, and is tied for No. 7 on the list for career touchdown catches with 17.

The Hurricanes must now take the good with the bad from the difficult loss, and continue to hone in on what’s working and find the solutions to what isn’t as the season continues. Easier said than done, but this team is clearly determined with ACC goals in mind.

“It’s only one loss in the ACC,” Kaaya said. “It’s more fuel to the fire. The Coastal is wide open right now. We just have to keep going, keep fighting and plan on winning it. That’s what I plan on doing. I know that’s what the rest of the team plans on doing. We can’t let this loss define us.”

Isaiah Kim-Martinez can be reached on Twitter at @isaiah5740.