With the threat of Hurricane Matthew long gone from South Florida, Miami-Dade County is setting its sights on helping thousands in Haiti who felt and continue to feel the severe impacts of the hurricane.

According to Haitian officials, more than 800 have died and the nation’s government estimates that hundreds of thousands are in need of assistance. The hurricane was the second major natural disaster to hit the island in less than 10 years. In 2010, the country was struck by a 7.0 magnitude earthquake that left thousands dead.

Hurricane Matthew ripped through the island nation as a Category 4 cyclone on Tuesday with winds exceeding 120 miles per hour. Due to weak infrastructure, many buildings throughout Haiti have been destroyed — leaving thousands without homes.

With South Florida having one of the largest Haitian populations in the nation, many community organizations have started drives to help with relief efforts.

The ManDodo Humanitarian Foundation, a faith-based, nonprofit organization, will be holding a We Stand With Haiti event in Miami Gardens, where people can sign up to volunteer and make donations at 333 N.W. 168 Street. According to the organization’s event page, the organization has been preparing and collecting donations for Haiti the past few days. Monetary donations can be made online at mandodo.org.

The Archdiocese of Miami will be accepting donations in Miami for Haiti at Norte Dame d’Haiti Church at 110 N.E. 62 St. The donations will also go toward helping those affected in Cuba.

The City of Miami Fire Department will start collecting non-perishable food items, diapers, baby food and first-aid supplies at all of their fire stations throughout the county at 8 a.m. on Saturday.

For students looking to work with on-campus organizations, Planet Kreyol, the University of Miami’s Haitian-American student organization, has formed a group to collect donations to send to Haiti. Students interested in donating supplies or volunteering can email Planet Kreyol president at acadet@miami.edu.

Saturday’s football game against FSU will recognize those impacted by Hurricane Matthew, and both schools will present a check for $50,000 for hurricane relief efforts, according to HurricaneSports.com.

Although Hurricane Matthew has weakened down to a Category 2 cyclone, it has hit Northern Florida counties and cities including Jacksonville and St. Augustine. According to St. Lucie County officials, two people died overnight. Another died in Volusia County, according to Volusia County Emergency Management. For those interested in volunteering to help in Florida after Hurricane Matthew, go to volunteerflorida.com.

For those looking to donate money to relief efforts online, visit WhiteHouse.gov for a complete list of agencies to donate to. 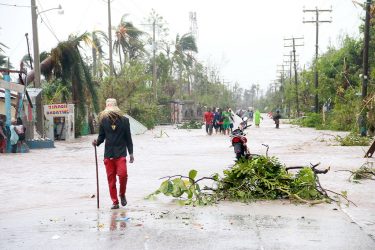