Freshman setter Hannah Sorensen (3) sets the ball for the Hurricanes during their 3-1 loss to Syracuse Sunday afternoon in the Knights Sports Complex. Josh White // Contributing Photographer

The Hurricanes lost to the Syracuse Orange 3-1 on Sunday afternoon despite a career-high 25 kills from junior outside hitter Olga Strantzali. This loss brings Miami’s record to 7-9 on the year and 1-3 in ACC play, dropping the team to 11th in the conference.

Despite the outcome, the match itself was tightly contested all the way through. The first set saw Miami jump out to a 14-4 lead, and the team eventually closed out the set 25-19 behind six kills and two aces from Strantzali.

However, the Canes began to struggle in the second set. The team quickly found itself in a 7-15 hole and was unable to climb back from the deficit, ultimately losing the set 27-25.

“We’re falling behind in almost every single set and it’s hard for us to cut the lead,” Strantzali said. “We have to start playing better in the beginning, so the other team has to fight from behind.”

Miami fell behind early again in the third set 7-12, which eventually led to a 25-22 defeat despite six kills from sophomore outside hitter/middle blocker Lucia Pampana. This set also featured a lineup change for the Hurricanes, as true freshman middle blocker Madison Dill started over junior middle blocker Sakile Simmons.

“Madison is more comfortable with what we’re doing and she was playing better in practice,” Head Coach José Gándara said. “Nobody’s safe or secure in the lineup.”

The fourth and final set was in Syracuse’s (3-11, 2-2 ACC) control for almost the entire time, and it won 25-21 to close out the match. Despite losing, Miami’s offense had plenty of bright spots between Strantzali’s performance and Pampana finishing with 12 kills and a team-high .500 hit percentage.

The downfall for the Hurricanes ended up being the Orange’s physical defense, which finished the game with 14 total blocks.

“We knew that they were physical, but we have to be focused on our skill,” Pampana said after the game. “It’s not going to be volleyball if we’re constantly like ‘Oh my God they’re so tall.’ We just need to focus a little better on our game and the wins are going to come for sure.” 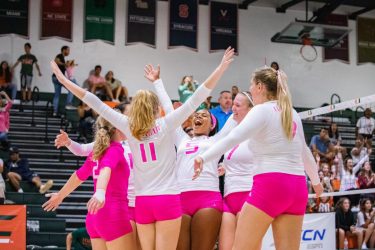