Miami must maintain discipline to beat Georgia Tech this weekend

The No. 14-ranked Miami Hurricanes will travel to Atlanta this weekend and attempt to notch their first conference win of the season against the Georgia Tech Yellow Jackets. Georgia Tech is a team that presents its opponents with many unique challenges, and the Canes will need to bring their A-game if they want to improve to 4-0 on the season. The last time Miami ventured into the unfriendly confines of Bobby Dodd Stadium, the team left with a disappointing 28-17 defeat. The Canes will need to do a few things in order to end up on the right side of the scoreboard Saturday afternoon.

Georgia Tech Head Coach Paul Johnson is one of the few coaches who still run this archaic style of offense, but it’s consistently helped the program succeed. The team has finished near the top of every rushing category for the past few years, and the Yellow Jackets have the perfect leader at the helm on offense in dual-threat quarterback Justin Thomas. UM senior defensive back Corn Elder praised Thomas on Tuesday.

“He’s a great player,” Elder said. “He’s very shifty and the whole team has to account for him and run to the ball on defense.”

The biggest adjustment for the Hurricanes will be dealing with the cut blocks that the Yellow Jackets will throw at them. UM redshirt sophomore defensive lineman Demetrius Jackson said that every defensive player will need to be locked in and focused on Georgia Tech’s blocking schemes.

“You have to use your eyes,” Jackson said. “You need to be fast with your eyes and use proper technique in order overcome the schemes they’ll throw at us.”

Miami has had tremendous success on the ground in its first three contests, but that will be even more crucial in this week’s game. Georgia Tech loves to hog the ball and tire out opposing defenses by keeping them on the field for long periods of time. UM running backs Mark Walton and Joseph Yearby will need to rush well not only for the offense to succeed, but also to give the defense some time to rest on the sidelines. Quarterback Brad Kaaya reiterated how important it is for the offense to stay in unison.

“We need all 11 guys doing their job,” Kaaya said. “When everyone is doing their job and working together, that opens up big holes for Mark and Joe and passing lanes for myself.”

Those big holes will be much needed by both the offense and defense this weekend.

It would be easy to overlook a game against Georgia Tech with archrival and top-15 opponent Florida State coming into town on Oct. 8. However, that’s exactly how upsets happen and the Canes do not want to give the Yellow Jackets any kind of hope in their home stadium on Saturday. Wide Receivers Coach Ron Dugans reassured the media that there would be no lapse in focus this week.

“We focus on the next opponent,” Dugans said of the Georgia Tech matchup. “This is a big game because it is our next opponent. We focus on who we have this week and we’ll go out and execute.”

If Miami can perform these three tasks on Saturday, the team will likely remain undefeated and in prime position to win the ACC Coastal Division. Kickoff in Atlanta is at noon EST on Saturday. 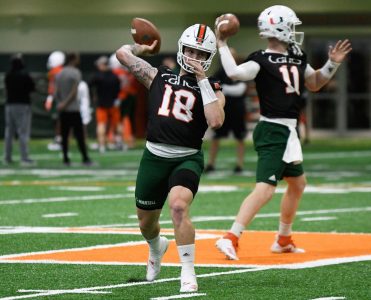