Home » Letters to the Editor: Responses to financial aid delays

Letters to the Editor: Responses to financial aid delays

Below is a selection of letters submitted to The Miami Hurricane regarding our story “Financial Aid Office gives students a run for their money.”

When a student is preparing for the new school year, they should be feeling enthusiastic, especially when the first day of classes is creeping up. The last feeling you want to have before school starts is frustration, and not about which clothes to bring, or whether or not they should loft their bed, but about how they will be able to attend class because their financial aid is non-existent or insufficient.

For the students in this article, I dealt with similar challenges of continuously calling OFAS about canceling my courses or not receiving documents I had already submitted multiple times. When your balance on CaneLink says zero, but your courses are on hold because OFAS is saying you have not paid tuition, definitely glues you to the phone to figure out, “Will I be able to attend school?” Sophomore Sarah Schoening’s words describing the phone system as giving you run around is very true, and it is an extensive process to reach someone. You are taken through series of automated voices with limited options, and once you do reach a human being, they end up redirecting you to someone else.

There has to be a better way to organize the system because based on a quote from John Haller, VP of Enrollment Management, it seems all the blame is being placed on Document Management. This cannot not be the only reason students are not receiving aid on time, or the proper amount of aid. Does this department need a re-evaluation or a revamp to ensure students’ documents are getting to their designated destination? What could be other factors that could affect students’ financial aid? How are thousands of dollars worth of “accidental aid” being given out? How can students and the university better work together to resolve these issues?

Nina Best is an undeclared sophomore.

After reading the story about financial aid, I believe that the root of many student issues was a lack of communication. The Office of Financial Assistance is responsible for notifying students about changes in financial awards in a timely manner. If students have been promised a specific amount of money, there needs to be a clear explanation as to why that amount would change.

In the case of Calero, he completed his forms correctly and there should not have been any issues with his scholarship. The financial aid department should have clearly explained the difference in scholarship for those who live on campus and those who are commuter students. Calero was granted excessive aid, but he was not aware that the aid was excessive until a representative informed him of this problem. It seems to me that the lack of communication is a one-sided issue, as students who are filling out their forms correctly are still receiving less money than they were promised.

I do think that after the adjustments were made, Calero was provided with the appropriate amount of aid. The issue remains in the inability of the office to notify him of the change. He is not responsible for the fact that the office overlooked his information. He was promised money and should have not been overpaid in the first place. If he had known initially when he began his time at the University of Miami that he would have received less money, he could have made adjustments.

Any student who fills out their information in a timely manner should receive the financial assistance that has been promised to them. If the Office of Financial Aid decides to grant students less money, this information should be relayed in a timely manner. Students should not have to scramble around a week before classes to figure out if they are going to return for the next school year.

Moving forward, students should be told when information is due and there should be deadlines for Office of Financial Aid to notify students of changes.

Julia Malave is a sophomore majoring in public relations.

As a freshman at the University of Miami, I try my best to keep up to date with campus news.  The Hurricane does a great job in giving me all the information I need to know, whether it is the outbreak of Zika, or the presidential election.  I enjoy reading the articles in the Hurricane because they are written by students and it gives me a sense of unity with everyone on campus. The financial aid article by Isabella Cueto, Julie Harans, Sherman Hewitt and Jackie Yang does a phenomenal job relating to students all over campus.  I have a good friend on my floor who needed financial aid and this article stands out because it reminds me of him and the struggles he had to go through just to be a student here. As a broadcast journalism major here at the University of Miami, I need to read and write many things in order to achieve my goal, and the Hurricane is a great starting point for someone like me.

Christian Liljenquist is a freshman majoring in broadcast journalism.

My biggest concern before coming to college was student loan debt. I had stated on multiple occasions that I would choose the school that awarded me the greatest amount in financial aid and scholarships. When it came down to it, I was between the University of Miami – which awarded me a combination of scholarships, grants, and loans – and Florida State University – for which I had the Florida Prepaid college tuition and would only have had to pay for residential expenses and other miscellaneous costs.

I chose the University of Miami because my heart has always been at this school. I felt the value of a University of Miami degree was great enough that it would absolutely be worth using loans to pay for part of my tuition. I am now in my junior year here, and though I look forward to beginning the academic year each fall, I dread the inevitable fights with the Office of Financial Assistance that have become tradition.

This year, dealing with financial aid was especially awful. My full aid package did not show up on Canelink until halfway through August, way after the deadline of Aug. 1. My aid package decreased as well. Not as significantly as other students who were profiled in the story, but enough that my parents had to apply for a Parent PLUS loan which is only covering the remainder of my tuition costs for this semester, not the entire academic year.

As I approach the end of my time at the University of Miami and am considering post-graduate options, my student loan debt from my time here is definitely going to impact my decision on whether or not I will attend graduate school. I can only hope that the financial aid situation at the University of Miami improves in the future, so students with similar situations will not have to suffer through the annual hell that is dealing with financial aid.

Dana McGeehan is a junior majoring in history and media management. She is a contributing columnist for The Miami Hurricane.

As unfortunate as Eric Calero’s situation was, it only made me more grateful for my own. Each of my three years at UM have been completely paid for by financial aid. Without it, I’d be going to a state school somewhere in Illinois. So, I’m ever-thankful for UM’s OFAS, but I also know how scary waiting for a financial aid package can be as well. I’m a communications student on the executive boards of multiple organizations, including my fraternity. One week before tuition was due for this fall semester, I almost had to notify them I might not be coming back.

Luckily, when I was finally connected to a desk assistant, the student was calm and patient with me and repeatedly thanked me for my understanding. After talking to one of his superiors within the office, he assured me that my package would be available by the weekend. I received my full aid, but had I not, I would have been in the same situation as Calero.
I appreciate all of the hard work that UM’s OFAS has done to accommodate me during my time here, but the office is in need of a change for the better. Moving up the deadlines for student documents is a good start, but I don’t think it’s the answer.
Gregory O’Bannon is a junior majoring in public relations.

I’m writing you today in response to the article, “Financial Aid Office gives students a run for their money.” I believe that more needs to be done for students.

After falling in love with the University of Miami, I made a very quick decision to apply early decision this past year. I essentially was putting all my eggs in one basket, I could easily receive no financial aid since there the school didn’t have to “tempt” me to attend. Luckily for me I was blessed with a grant from the University of Miami which covered 25 percent of tuition and housing. The sad but true problem is that it’s just simply not enough.

College in today’s world is a very costly investment in one’s education. In relation to the University of Miami, the projected cost of tuition is around $60,000. That plus the cost of living, books, and other general items can mean that a student from the U graduates with almost $250,000 worth of debt. This is simply just not fair for students. This country has a problem with it’s education. Too many graduates can’t get a job, and along with that, the debt keeps piling up. The Office of Financial Aid along with the government needs to change this, otherwise, the future isn’t looking so bright on the sunny shores of Miami.

Justin Stevens is a freshman majoring in broadcast journalism. 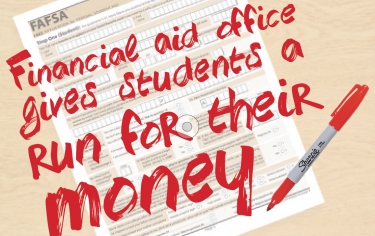