Featuring paintings, ceramics and mixed media prints, UM’s annual Incoming Graduate Student Exhibition in Wynwood will catch the eyes of visitors with its variety of artwork.

During a reception on Sept. 10, five artists discussed their process and showcased work from their portfolios when they applied for entrance into UM’s competitive three-year Master of Fine Arts program.

“I like to think of this exhibition as a group solo show,” said Milly Cardoso, UM’s gallery coordinator. “The works are very different, and we have a little bit of everything.”

Christine Di Staola showcased a series of paintings titled “Chair.” She used pastel oils on paper to create dreamlike stills of two chairs in front of an open window.

Di Staola said that her work is symbolic of her choice to enter the program.

“I think my work resembles me contemplating whether to leave Italy or to stay,” Di Staola said. “To someone, the empty chairs can mean somebody just left, but it can also mean that somebody is coming.”

Alex Hodge, a ceramics artist, showcased vases and hands made out of porcelain. The pieces conveyed powerful messages about the judgmental nature of society.

On her 23-inch vase titled “Tribute to Astarte and Her Spirit of Tenacity,” Hodge carved a message that read, “Because you don’t never know when somebody will literally try to kill you just for being who you want to be.”

Hodge wrote the names of women who were shamed by society for trying to be themselves, including LGBT advocates and transgender women Laverne Cox, CeCe McDonald and Gwen Araujo. Araujo was murdered in 2002.

Gabriel Madan, a printmaking student, displayed his colorful pieces, one of which was a piece printed directly onto a window blind, called “These Aren’t My Keys.”

Another piece he displayed, “Hothead Boxhead,” took him more than a year to plan. He eventually decided on a collage of images that included a still from a 1960s Argentinian film, a Snapchat screenshot and part of a clothing advertisement.

Other works featured in the exhibition included two 44-by-66-inch digital photographs by Juan Sebastian and colorful abstract paintings by João Campos, who used a variety of materials like oil, latex and acrylic.

“In three years, they will have to do their own solo exhibition to defend their thesis,” Cardoso said. “The work they display now [compared] to the work they will display at the end of the program is usually like night and day.”

Di Staola said that if she had one piece of advice to give to artists, it would be to never wait to do something you love. This sentiment echoes the essence of the show. The artists have taken chances by creating work that is true to themselves and what they believe.

The View: Musical throwbacks that will make your day
Poll: Which issues are most important to you in the 2016 presidential election? 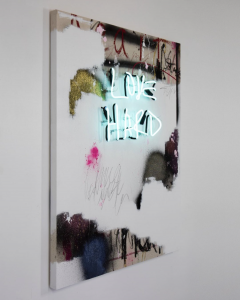