Home » Department of Athletics has new studio for shows

Department of Athletics has new studio for shows The University of Miami Department of Athletics added an in-house studio to their complex for The Mark Richt Show and Hurricane Hotline. Chloe Harrison // Contributing Photographer

“I like the new studio,” Richt said. “They did a beautiful job with making it pleasing to the eye and very functional. It’s obviously convenient to be right there in the building; that’s a big deal.”

“It was a great enhancement for us,” Jason Layton, senior associate athletic director for Communications and Sales, said. “In the past, when we did our video or any of our different things, we would have to set up different spots, whether it was in meeting rooms or auditoriums or things like that. Now, this allows us to do all of our video and radio and everything in one spot, making us more efficient and allowing us to do a lot more programming.”

The studio will also be home to interviews, features, human interest stories and other athletic department projects.

“It’s a one-stop shop for all our production now,” Layton said.

The studio ties into the control room, also in the Department of Athletics, which is connected to ESPN. The control room was built last year to accommodate 110 ESPN3 broadcasts for the university, launching Miami to the top of the ACC in broadcasting. This achievement, along with time and space constraints and the upcoming launch of the ACC Network, led to the creation of the studio.

“One of our biggest challenges was having a dedicated space that we could fix up and do interviews with good sound and that’s professionally lit,” Layton said. “We would have to set up meeting rooms and auditoriums, and we would have to spend a couple hours setting up and getting ready for a shoot and take it all down after a 15-minute shoot.”

The athletic department converted an office into the studio after the spring 2016 athletic season concluded. The studio includes a raised ceiling to accommodate lighting and a visual graphics board. Design and construction took merely a few months to complete.

“It was a challenge because it was a very small space, but from a TV standpoint, it has a lot of depth,” Layton said.

The biggest drawback for fans is that Hurricane Hotline is no longer open to the public. The weekly radio show, which features head coaches from the university, aired live from a variety of locations over the years, most recently at the Rathskeller last season.

“It was always great when we did open [Hurricane Hotline] to the public, but [the studio] allowed us to get more done in a smaller amount of time,” Layton said. However, community engagement is still an option, and Layton mentioned that the department is still looking to have interactions among the public, the student-athletes and the coaches.

Hurricane Hotline airs on Mondays at 6 p.m. on radio station 560 WQAM. The Mark Richt Show airs Wednesdays on television on Sun Sports at 4:30 p.m. and re-airs Saturdays on My TV33 at 11:30 a.m.

The athletic department is looking for students interested in camera operations and production. Students will work closely with ESPN3 and provide help in the control room, in the studio and at games on campus. The positions are paid. 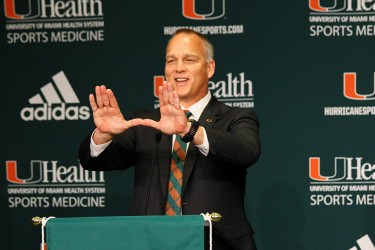 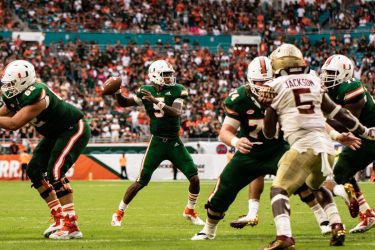