Frost School of Music Dean Shelton Berg performs a piano instrumental of the song “Lean On Me” for sophomore Connor Golden during the Hillel Open Mic Night to benefit Golden Wednesday night. The event raised funds to cover Golden’s medical expenses incurred during his recovery from this summer’s incident. Hunter Crenian // Staff Photographer

The University of Miami Hillel hosted a special Open Mic Night, partnering with the Frost School of Music, as a tribute and to raise money for Connor Golden, who was severely injured this past summer in Central Park.

Hillel just opened last year, and Frost students Alexis Kesselman and Isabella Englert wanted a way to highlight the space. This year, they plan to host them once a month on Wednesdays. Usually, the event is free, but for this night, they charged $7 per ticket, plus donations, to raise money for Golden and his medical expenses.

Kesselman and Englert saidGolden was going to switch into their program, the contemporary music program, from classical. The sophomores were excited for Golden’s switch. Each class typically has about 30 students, so everyone knows each other pretty well.

Kesselman and Englert said they were most attracted to the sense of community at UM.

“When we first came as freshmen last year, it was such an overwhelming sense of community and just – it sounds cheesy but – love for everyone in the program because I think everyone’s so respected,” Englert said.

The session is usually held on the Hillel rooftop. For this event, the organizers were hoping to bring in at least 100 people, so they moved it to the sanctuary to fit more people, including Golden, who was in attendance.

“We heard about what happened over the summer,” said Kesselman, “and I just kind of got the idea that as a community, it’s so important to show him we were affected by it.”

There were nine acts by Frost students scheduled for the night, followed by an open mic for anyone else who wanted to perform. Students played guitar, piano and sung, making for some crowd-pleasing performances from a large audience.

The night was highlighted by Shelton Berg, dean of the music school, who said the song he prepared was “something that relates to all of us and Connor.” He proceeded to perform a soulful rendition of “Lean On Me” on the piano, which brought the crowd to its feet.

“I could really feel the familial community within the Frost school and the Hillel organization, Freshman Sarah Kapadia said. “There was tremendous support for all of the performers and for Connor, and the atmosphere was warm and inviting throughout the entire night.”

Anyone who could not attend the Open Mic Night but still wants to donate can go on Golden’s GoFundMe page, gofundme.com/ConnorGoldenFund. The page has already raised more than its initial goal of $75,000. 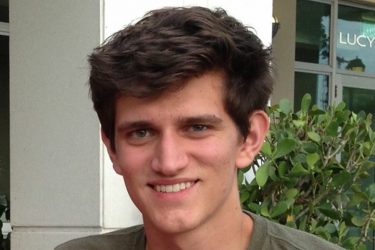