For redshirt junior goalkeeper Catalina Perez, the road to representing the Colombian women’s national soccer team in the 2016 Olympics was an uphill battle.

“Four years ago, I was the last player cut from the Colombian Olympic roster,” Pérez told Hurricane Sports. “When I was cut on the last day, it hurt badly because of the deep desire and hope I had created within me.”

In the London games in 2012, Pérez admitted to not being ready for the moment. Instead of letting the disappointing news defeat her, however, she used it as motivation to get better.

“I was very young and I did not know exactly what I was getting into,” Pérez said. “I remember watching them on TV and saying to myself that in four years, I would be there. I would do whatever it took to be in the Olympics.”

Getting cut from the Olympic team was not the only stumbling block Pérez encountered. She also suffered a torn ACL that kept her out her entire sophomore season in 2014.

Pérez was driven from that point on to work even harder. She believed being cut in 2012 was only the beginning to her Olympic story – and she was exactly right.

“I had been traveling back and forth from Miami to Colombia every month starting in January to train,” Pérez said. “It was hard work, especially having to keep up with school work without a professor right there.”

Pérez expressed that the tedious schedule was undoubtedly worth it. Competing has been an incredible honor for her and marks the achievement of a long-term goal. The 5-foot-8 goalkeeper’s special experience in Rio de Janeiro provided a one-of-a-kind environment and opportunity to improve her game.

“The atmosphere was very unique,” Pérez said. “Although we were all competing against each other for two or three spots to advance to the next round, there was a sense of camaraderie between everyone.”

Pérez learned a lot on the field as well. With the other three teams in their group being the USA, France and New Zealand, the Colombians knew that the games would be both challenging and physical.

“It really exposed me to very high-level soccer.” Pérez said. “I further realize each time that it is not just about playing hard, it’s about playing smart.”

When asked about what it means to represent her country and her school, she described it as a way to inspire others.

“When I was growing up, it wasn’t common for girls to be playing soccer,” Pérez said. “I want the girls watching in Colombia to believe that they can achieve these goals.”

It’s safe to say that this experience was a success for Pérez.

“I am very grateful to have had the honor of representing my country,” Pérez said. “Thank you very much to everyone at the University of Miami who has made this possible for me.”

Correction, August 28, 2016: The photo caption at the top of this article originally stated that Pérez posed in a stadium in Rio de Janeiro. That was incorrect. That particular stadium was not located in Rio. 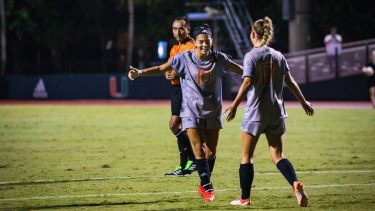